A flooded basement turns into a potential health scare for some homeowners living in the middle of a toxic plume. 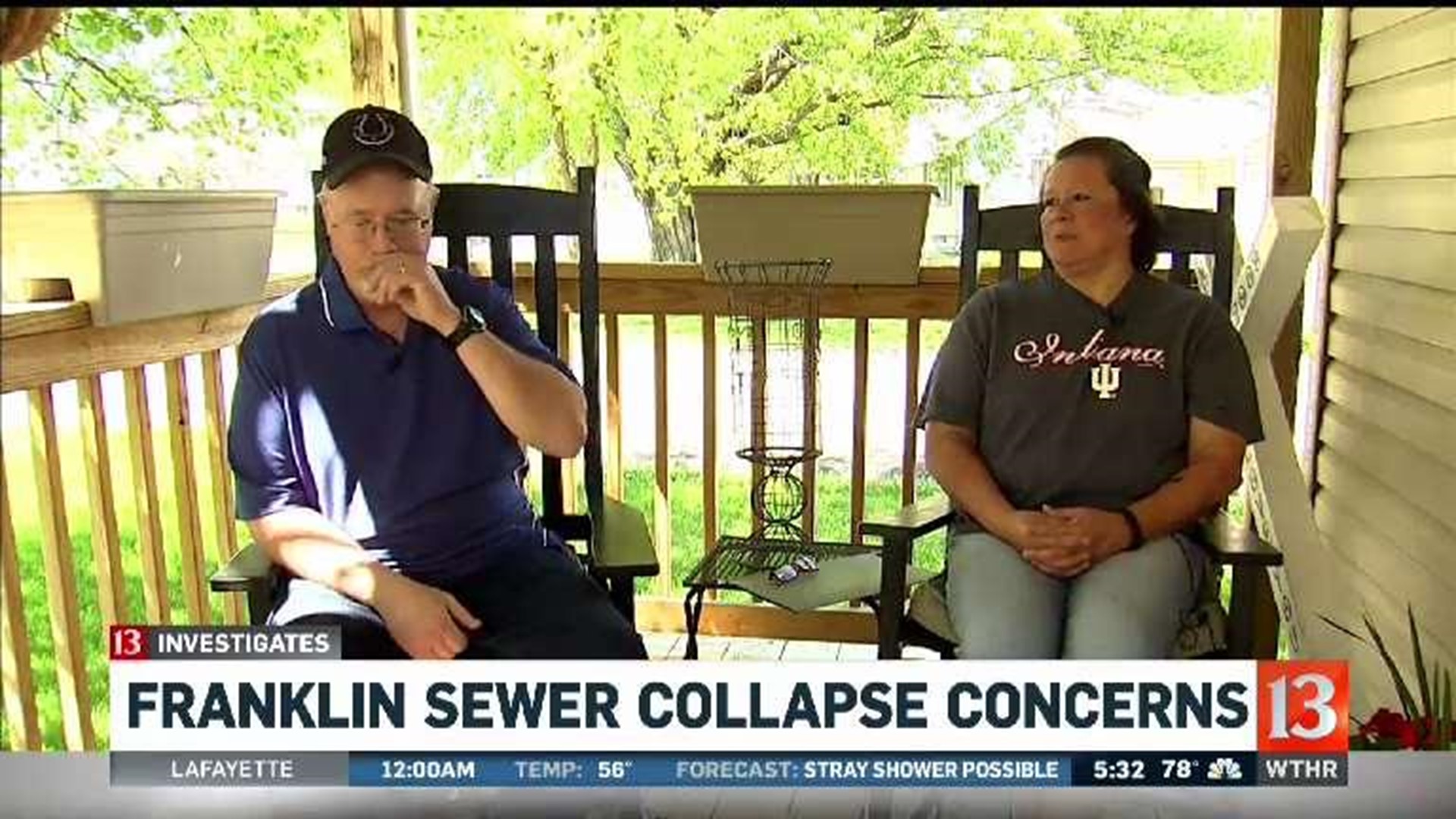 FRANKLIN, Ind. (WTHR) – A flooded basement turns into a potential health scare for some homeowners living in the middle of a toxic plume.

A Franklin family is speaking out about possible exposure to toxic chemicals after a sewer line collapsed outside of their home. 13 Investigates explains why that crisis is raising new concerns for those already at risk.

For seven hours on April 27, Mike and Frances Denny tried to shut down the water gushing from a sump pump hole onto their basement floor.

"Sometimes it was clear, and then sometimes it came out a little murky," explained Mike Denny.

For many other homeowners, that Saturday night incident would just be a flooded basement. But for the Dennys, it was a potential exposure to toxic chemicals.

"My granddaughter asked me, "Am I going to get cancer?" So that's heartbreaking," said Frances Denny. "She shouldn't have to be asking those questions," she added.

Sewer collapse causes a flood of concern for a Franklin family living in the path of a toxic plume. @13Investigates has their story and calls for better crisis contamination. @WTHR 5:30 pic.twitter.com/dQaId4BKLG

The Denny's live on Forsythe Street in Franklin right in the middle of a plume of cancer causing chemicals, migrating from the old contaminated Amphenol site.

Last November, the EPA discovered TCE and PCE spreading in the groundwater and sewers down Forsythe Street and into the Ross Court neighborhood. The path travels right in front of the Denny's home.

Vapor testing revealed extremely high levels of toxins in the sewer gas just 12-feet from the west wall of the family's basement.

The Denny's are one of at least five families to have mitigation systems installed and paid for by Amphenol. The numbers are reportedly declining.

Now the couple is worried about what came up into their basement.

The city of Franklin has been replacing sewer liners for months across the community.

IWM, the environmental company hired by Amphenol is also replacing the entire sewer line along Forsythe Street. But on the Saturday night of the sewer collapse, no one knew what was going on.

"They didn't know until Frances called and said 'Hey we got something going on here...it's coming into our house,'" explained Mike.

It turns out a sewer line collapsed just feet from their driveway. City crews and IWM both initiated an emergency response.

The city replaced a 15-foot segment of the sewer. According to the EPA, the collapse "likely occured after tree roots were cleared for a camera inspection," of the sewer.

13 Investigates also learned the system set up to treat contamination at the Amphenol site was shut down while crews made repairs.

The pump and treat system was shut down for a total of five days. That means any groundwater contamination leaving the site during that time was raw and untreated.

The Denny's told 13 Investigates they had no idea the pump and treat system had been shut down until well after the incident. And that's not all, the couple says there was little guidance during the crisis.

"They didn't say anything about whether or not the water was contaminated or not. We didn't know," Mike told 13 Investigates. "I'd like to know how that affects us and other people," he added.

Yet just out his front door at the site of the collapse, he could see dumpsters full of dirt being hauled away for testing.

"I'm thinking, 'I am concerned. You're digging up the soil, you're taking the soil away. If the soil is contaminated, you know there's gotta be something else in the line,'" he recalled.

The EPA confirmed 50 cubic yards of soil was excavated in put into containment boxes for testing. The soil will then be sent to the appropriate landfill, based on IDEM requirements.

The Dennys not only want their basement professionally cleaned, but say homeowners like themselves who are already at risk deserve more in a crisis.

"Communication," said Frances. "Letting the homeowners know that that had gone on," she said referring to timely updates on the situation.

"What's the long term effect you know since we've been here. The soil and the contamination and all that," added Mike.

The EPA insists taking the system off-line temporarily "poses no risk to residents." But Amphenol's contractor, IWM did provide an air scrubber to the family.

As for clean-up costs, the Denny's have filed a tort claim with the city of Franklin.

On Wednesday May 8, investigators from the Office of the Inspector General of the EPA will hold a public listening session in Franklin.

The team wants to hear what Franklin residents have to say about crisis communications as a result of the contamination and clean up efforts. The Dennys plan to attend the event and share their experience.

The meeting is from 6 to 8 p.m. at the Cultural Arts and Recreational Center on Branigan Drive.