The callers say service will be shut off in 30 minutes if the customer doesn't pay. IPL says you should hang up and call them directly with any questions. 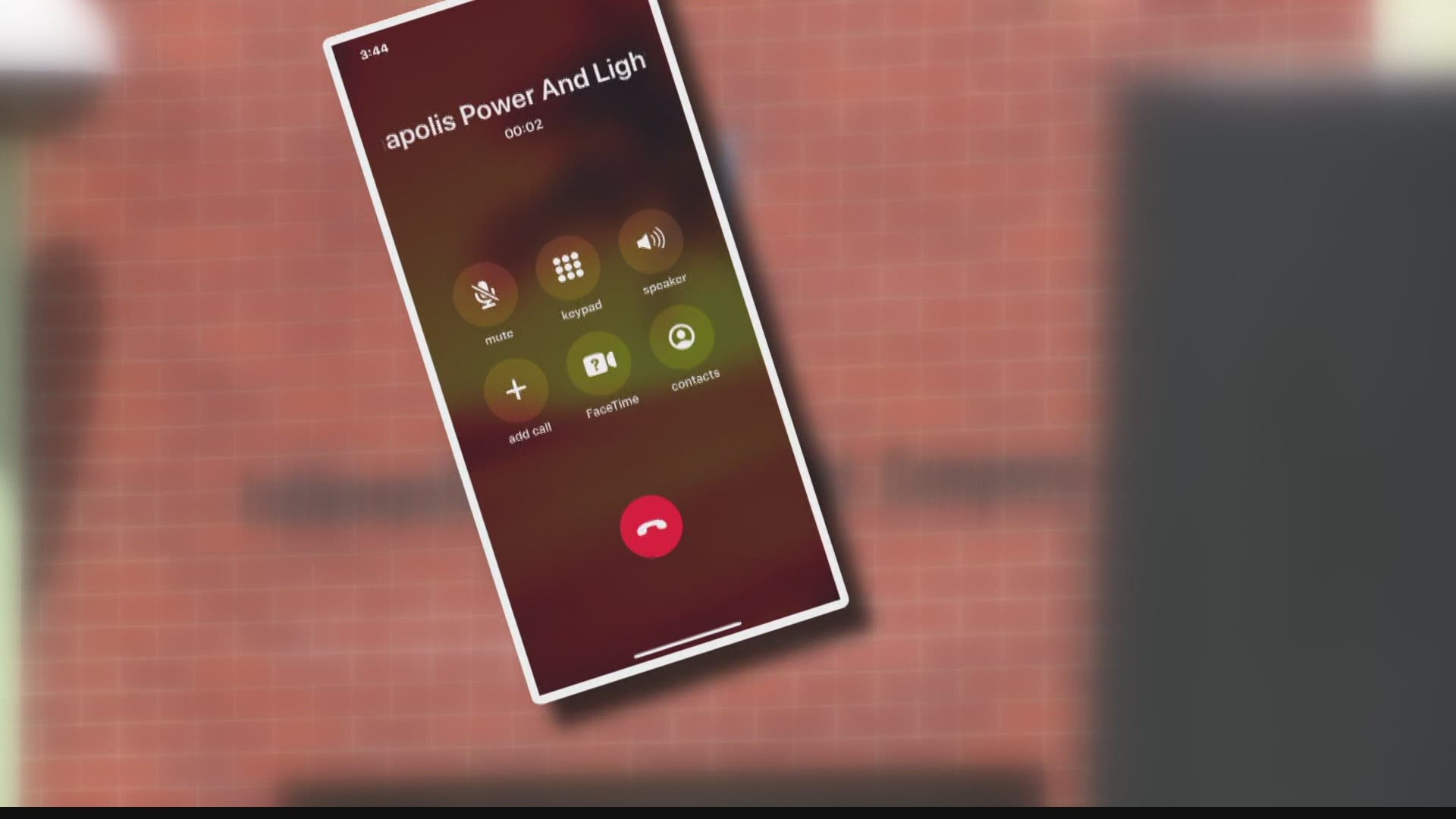 INDIANAPOLIS — An old scam is looking for new victims, and Bruce Schumacher hopes his neighbors won’t fall for it.

“I fear somebody is going to make a mistake and give away their credit card information or something else these people absolutely should not have in their possession,” he said.

Schumacher was targeted by the scam this week when his cell phone rang and he thought he recognized the caller.

“The [call] I got was from someone that pretended to be with the Indianapolis Power and Light Company, and said if I didn't pay my bill with them within 30 minutes, my power would be shut off,” Schumacher told 13News. “Now ordinarily that would be a 100% red flag, but these folks were sophisticated enough to have been able to spoof IPL's phone number. The person on the call was fairly well spoken and the fact that [number on caller ID] popped up as IPL did give it some degree of credibility.”

Schumacher was still skeptical. He was fairly certain he was up-to-date on his monthly utility payments, so he hung up and called IPL directly.

He did not have to wait to long to confirm his suspicions. A recorded message that greets callers informs them IPL is not disconnecting anyone’s service right now and to be aware of scam callers demanding payments.

“I knew then it had to be a scam, and I’m thinking if I’m getting this, other people are getting it too,” he said.

Other Hoosiers are indeed getting the fraudulent calls, and IPL says its customer service representatives are now spending a lot of time trying to calm the fears of customers who have been targeted by scammers. In fact, IPL says calls about scams are now “at the top of the list” for their call center staff.

“I talked with a customer service agent yesterday and they had received 17 calls over a period of time, and 16 of the 17 were to report scams,” said IPL spokeswoman Courtney Arango. “We will never demand immediate payment and threaten electrical service disconnection. That's not something we're going to do.”

The scam comes at a particularly difficult time as many Hoosiers have fallen behind on their utility payments due to layoffs and other financial challenges caused by COVID-19. IPL says it is currently contacting customers who are behind on their payments to offer a variety of alternate payment plans. And due to a statewide moratorium that prohibits utility companies from shutting off customers’ electricity during the pandemic, IPL cannot even consider disconnections util mid-August.

But that does not prevent fraudsters from targeting vulnerable Hoosiers with scare tactics that are hard to ignore.

What happened when a scammer called an investigative reporter

Among those targeted by the electricity shutoff scam this week…me.

I got the scam call Wednesday afternoon.

The recording said IPL had not received any payments from me for several months, so they were trying to contact me one last time before following through on a disconnection order in 30 minutes. It sounded sketchy, but when you hear your power will be shut off in a half hour, that’s hard to ignore.

The recording said I could press several numbers to be connected right away to an IPL customer service representative. It also gave the option of calling a toll free number to talk to someone that way.

I chose the later option and got a welcome message that said “Thank you for calling IPL.” I was told to press 1 to report a power outage, press 2 for the accounting and billing department, and press 3 to establish new service. In other words, these scammers were going out of their way to make this look legit.

“There is a service order to disconnect your service in 30 minutes,” she reminded me. When I told the woman I did not think she really worked for IPL, she stopped talking. When I told her I wanted to record the conversation to broadcast on the news, she hung up.

I didn’t give away my banking or credit card information, but I did divulge my cell phone number to better understand how the scam worked. That phone number is not exactly secret, but knowing the fraudsters can already link it with my name and address is a reminder that giving out ANY piece of information to a scam artist isn’t a particularly good idea.

IPL says customers should not continue to engage with someone claiming to be an IPL employee if they have any suspicions or doubts. “The biggest thing I’d say is if you’re unsure if the caller is truly an IPL employee, just hang up and call us back and ask,” Arango said. “That’s always OK.”

The direct number to contact a real IPL service agent is 317-261-8222. You can always find that number right on your monthly bill.

Schumacher immediately reached out to his neighbors to warn them about the scam. He worries not everyone will realize the callers are up to no good.

RELATED: You're not winning an RV on Facebook - and here's why trying is probably a bad idea

RELATED: Text message providing free groceries from Target due to coronavirus is fake

RELATED: Carmel warns of phishing scam with emails appearing to be from mayor and council