To solve gun-related crimes in the Haughville neighborhood, IMPD might deploy its Flex Team, a group of officers and investigators who target a specific area. 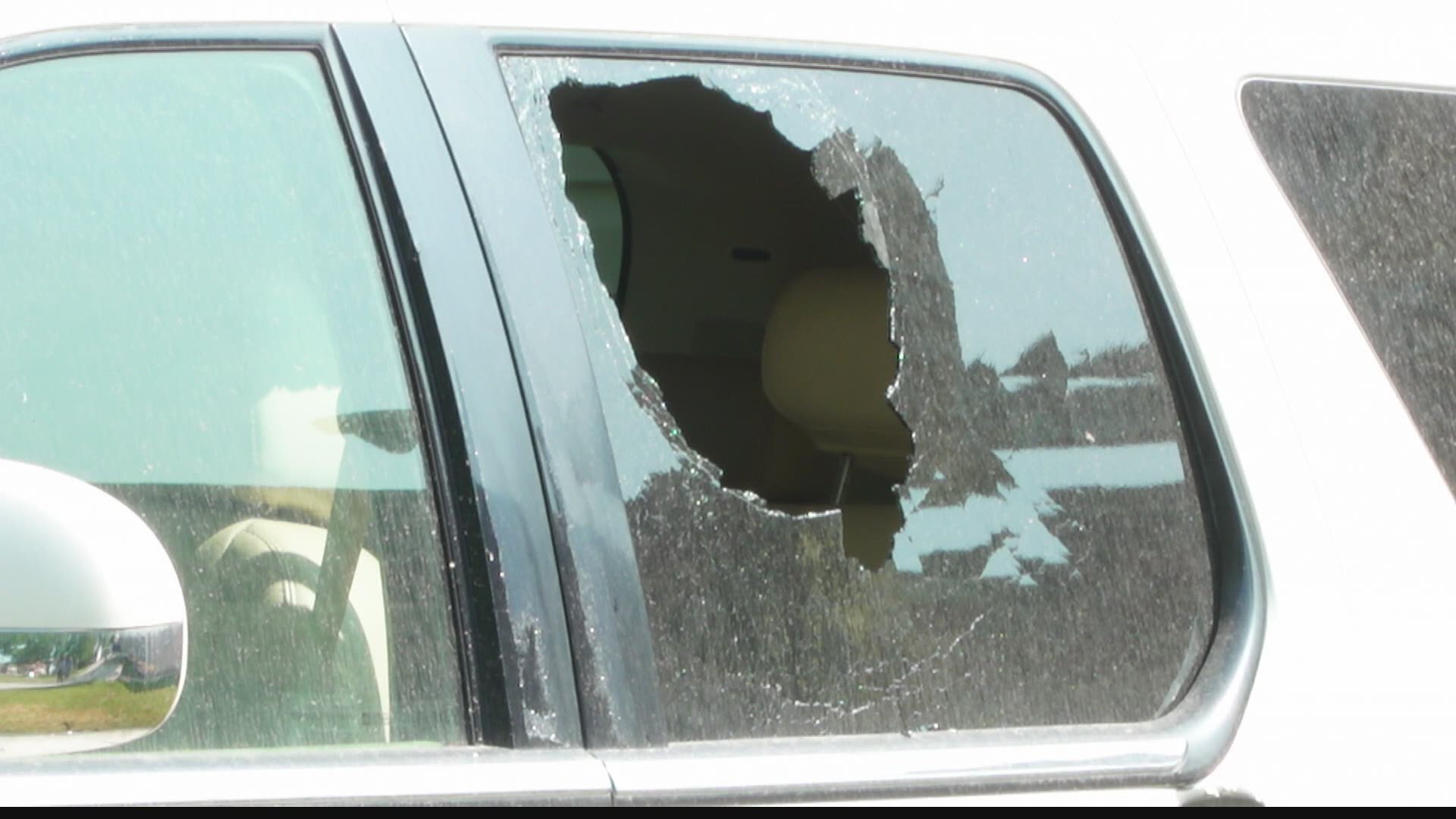 INDIANAPOLIS — Clarence Brookins said the last few nights along Traub Avenue have sounded awful. He has been kept awake – or startled from sleep in the middle of the night – by the sound of gunfire.

“Even in the daytime you hear gun shots. It's the wild wild west, people going down the alley shooting guns,” she said. “It started about two weeks ago, but the last three or four days have been the worst.”

Evidence of the shootings is everywhere.

Nearby homes in the Haughville neighborhood have bullet holes in the windows and siding. Cars have shattered windows and holes where a bullet appears to have pierced one door and exited through another. Bullet casings lie scattered along an alley that runs behind Traub Avenue – the location where neighbors say much of the drive-by shootings take place.

Credit: WTHR
A car in Haughville riddled with bullets.

Harder to see is the psychological toll the recent shootings have taken on the neighborhood, but it’s there.

Front porches where you’d normally see residents reading or drinking a cup of coffee are empty. A nearby park and its playground equipment is usually deserted, even after school and on the weekends. Many neighbors say they do not feel safe sitting inside their own homes -- let alone allowing their children to venture outside – amidst the recent rash of drive-by shootings taking place at all hours of the day and night.

“You never know if a bullet is going to fly by your head or hit you in the back when you’re sitting in your house. You just don’t know,” Joyce said. “You don’t feel safe in your own house. You shouldn’t have to leave your house because you’re afraid to stay here.”

Leaving is exactly what one of her neighbors did this week after enduring several straight days of shootings that scarred the neighborhood physically and emotionally. That neighbor spoke to 13News on the condition of anonymity because she fears talking publicly will make her home a target of more gun violence.

“I went to my son’s home each night -- Sunday, Monday and Tuesday – because I’m just afraid of all the gunshots,” said the woman, who has lived in Haughville for more than a quarter century.

Newer residents said they are looking to leave permanently.

“I feel bad for the kids,” said Tristan, a young man who moved into the neighborhood a few months ago. “You definitely hear the gun shots. You can’t miss em. It’s scary stuff.”

The scariest part for Clarence Brookins: the indifference shown by the people who have fired bullets into homes -- both in broad daylight while residents are in their gardens and in the early hours of the morning while his neighbors are sleeping. Even in a neighborhood that has seen a high number of shootings and homicides in recent years, the randomness of this month’s gun violence keeps Brookins awake at night.

“Bullets don't have eyes. They're going to hit anything. It's sad and something needs to be done,” he said.

Credit: WTHR
Joyce and Clarence Brookins at their home in Haughville.

What residents want done is for the shooters to know they are being watched. And right now, neighbors don’t believe they have enough eyes to prevent the gunfire from continuing.

“If people believe nothing’s going to happen, they’re going to keep doing it. It’s going to get worse,” Joyce said Wednesday afternoon. “I want more police presence – all the time. We have to have a presence out here.”

Brookins said she has called 911 four times in the past week, and each time the IMPD arrives to investigate.

“They do come, but that’s after the fact. I want them out here on the streets and visible so the shootings don’t happen in the first place,” Brookins said.

13News spoke with IMPD Wednesday afternoon about the residents’ request.

“Everyone deserves to be safe in their own home,” said IMPD public information officer William Young. “We will talk with the district about increased patrolling. Whenever someone wants extra patrols in a particular area, we will make sure that happens … especially when there’s been an uptick in activity and reports of shootings.”

Credit: WTHR
A shell casing on the ground in Haughville.

Police say figuring out who's behind the recent drive-by shootings isn't easy – a crime that is even more difficult to solve when residents feel scared to share what they know. IMPD told 13 Investigates it welcomes information on its anonymous tip line (317-262-TIPS) and that it relies on those tips to help solve these types of cases.

“We can’t do this alone. We look forward to those community partnerships to help us hold the people accountable who are behind the trigger,” Young said.

To solve gun-related crimes in the Haughville neighborhood, he also said IMPD might deploy its Flex Team, a group of officers and investigators who target a specific area impacted by repeated crime.

In the meantime, neighbors say they are holding their breath as another nightfall approaches unsure when the next shooting is going to happen.

“This has happened three nights in a row. Tonight is the fourth night. Is it going to happen tonight? You never know,” said a resident considering whether to spend the night in her home. “All the gunfire, it just happens too much.”