13 Investigates has a consumer warning about contractors working without proper credentials in cities where they're supposed to be licensed. WTHR found an online service providing referrals despite the rules. 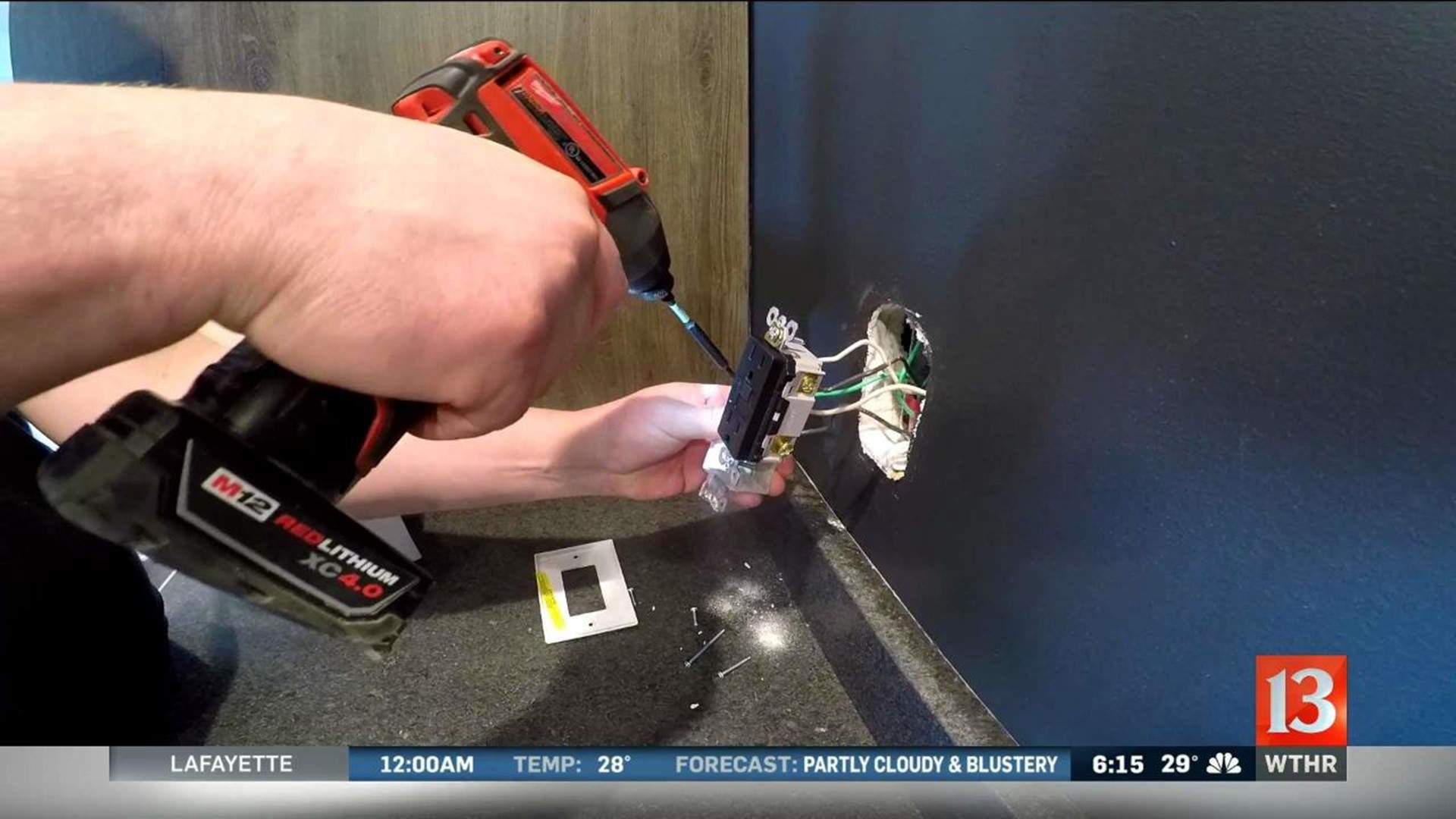 INDIANAPOLIS (WTHR) — Property owners lose over a billion dollars each year to electrical fires. Faulty outlets, lighting, distribution panels or wiring can all cause problems.

One wrong connection is all that is needed to put your home and family at risk.

13 Investigates has a consumer warning about contractors working without proper credentials in cities where they're supposed to be licensed. WTHR found an online service providing referrals despite the rules.

Michael Edmonds is a licensed electrician. His company, Electric Today, subscribes to the service.

"They charge us by the lead anywhere from $20 to $50 dollars," Edmonds told 13 Investigates. He said the lead could go out to as many as five electric contractors who compete for the job.

"It's in (Home Advisor's) benefit to send out as many as possible," Edmonds explained.

The online service promises consumers its network of professionals are both screened and approved.

But should you take their word for it?

Edmonds was surprised by the caliber of competitors he encountered on potential job sites.

"Really no credentials at all," he said. "The only thing they've got going for them is the cheapest price."

According to Edmonds, his company is often called in to repair the mistakes made by unlicensed contractors who have not passed stringent testing requirements. His experiences prompted him to reach out to 13 Investigates.

It didn't take long for WTHR to uncover the same alarming problem: Contractors in central Indiana touting they are listed with Home Advisor but are not properly licensed, bonded or insured with cities like Indianapolis that require stringent certification.

Homeowners Have No Idea Workers Are Unlicensed and Violating Rules

13 Investigates caught up with one contractor getting referrals from Home Advisor and breaking the rules in Indianapolis.

A contractor is not required to have an electrical license for "installation or repair of electrical wiring, devices, appliances, apparatus, or equipment operating at less than twenty-five (25) volts and are capable of supplying less than fifty (50) watts of energy, except for fire detection or fire alarms, as defined by the state... A contractor does not have to be a licensed electrical contractor if wiring for computers (below 25 volts), data systems (below 25 volts), or security cameras... An unlicensed person may only perform electrical work under the supervision of a licensed electrical contractor."

Stanley Peterman has been banned from holding a license for electrical work in Indianapolis. (WTHR Photo)

Stanley Peterman has worked in and around the city for almost 50 years, even though the city revoked his license in 2004. According to city records, Peterman was using the name of a licensed electrician to get city permits and doing electrical work without the license holder's supervision. The City Electrical Board ruled that Peterman was acting "fraudulently or with deceit" by signing someone else's name on the permits (Peterman Electric is a separate entity from Peterman Heating and Cooling, which is not part of our investigation).

13 Investigates asked Peterman about continuing to work without a license.

"If the rules say you are supposed to have a license to operate in a city, you don't think you should have to follow that?" questioned 13 Investigates.

"Well I agree and I disagree," Peterman responded.

"So the last 14 years you've just been doing it without a license?" 13 Investigates asked.

"Well I have been doing some jobs. Yeah, " he admitted.

Peterman went on to tell 13 Investigates he has also had to redo electrical work performed by unqualified contractors and that he understands the safety concerns.

He confirmed he had completed a full house re-wire down the street from where we caught up with him.

In January, the city electrical board found out Peterman was working at that particular site unsupervised. The Board noted it would warn code enforcement inspectors to "be on the lookout for Stanley Peterman and Peterman Electric."

"What do you think about that?" questioned 13 Investigates.

"I think somebody is either mad at me downtown or something because I've never had a complaint. Never had an inspection that didn't pass," Peterman said without apology. He told 13 Investigates he is a self-trained electrician and carried a certificate of insurance.

But Peterman confirmed he has not taken the Board certified test to get his electrical license.

"Not in Indianapolis. No," he said.

Only 1 in 4 Pass the Open Book Electrical Test

“It's pretty scary when you think about it”

The Indianapolis test is the same four hour, open book exam required in cities like Anderson, Richmond, and Terre Haute.

It costs $100 dollars and requires a 75 percent passing grade to get licensed.

"About 75 percent do not pass this test," said Dennis Sheets, the Chairman of the Indianapolis Electrical Board. "So how many people out there aren't even taking the test and doing electrical work? It's pretty scary when you think about it."

Underscoring the seriousness of the licensing issue, Sheets added, "We burn down homes when it's not done right."

In Indianapolis, a license also means a contractor is bonded for at least $10,000 dollars and insured. It's all part of the city's requirement for the credential.

"It's very important that people who are having stuff done in their homes, that they have some protection if something goes wrong," Sheets stated.

He said homeowners can file against a contractor's bond if a project is not properly repaired. Insurance helps homeowners to collect if there are damages or injuries.

Another problem, according to Sheets, is that some contractors believe that if something doesn't require a permit, they don't have to be licensed to perform the work. He says that is incorrect.

Sheets was stunned to learn that a service like Home Advisor makes referrals without checking local licensing records.

"That really should not be allowed to happen. It's kind of leading our consumers into a kind of a false situation," he said.

In the fine print, Home Advisor said it does check state licensing.

But Indiana does not have any statewide licensing for electricians. Each city sets its own rules.

And according to Home Advisor's disclaimer, the service stated, "Home Advisor does not review or verify the information or the representations set forth by (contractors') profiles."

This disclaimer opens the door for contractors to make whatever claims they wish.

"I can drive you around this town and I can show you a lot of people who are not licensed," insisted Peterman, who said he's preparing to retire soon.

"There are a lot of people coming into this city and are not licensed and shouldn't be working in this city. But you can't catch them all," added Sheets.

The city of Indianapolis has issued fines of up to $5,000 to unlicensed electricians who are caught breaking the rules.

Sheets said he would like to see Indiana move to a statewide licensing system to make sure everyone is adhering to the same rules. He noted past efforts to create such a system failed in the legislature.

With so many variations from city to city, homeowners have the task of verifying a potential contractor's credentials and determining their own level of comfort.

Homeowners should also be sure their contractors have gotten the proper permits to do the work no matter what city they live in. Those permits can help insure a code inspector will make a follow up visit to review the work that’s been done.

In a statement from its Colorado Headquarters to 13 Investigates, Emily Doyle from Home Advisor said:

"We conduct criminal, civil judgment and state-level licensing checks on business owners prior to them joining our site, and we encourage consumers to confirm local licensing before hiring. We also look into any concern a consumer raises about a particular pro in our network."

Indianapolis a website full of licensed electrical contractors to choose from. Many of the contracts also cover the surrounding areas.