Six months after a mailman scratched an Indianapolis man's truck while escaping attacking dogs, the truck's owner is still looking for answers. 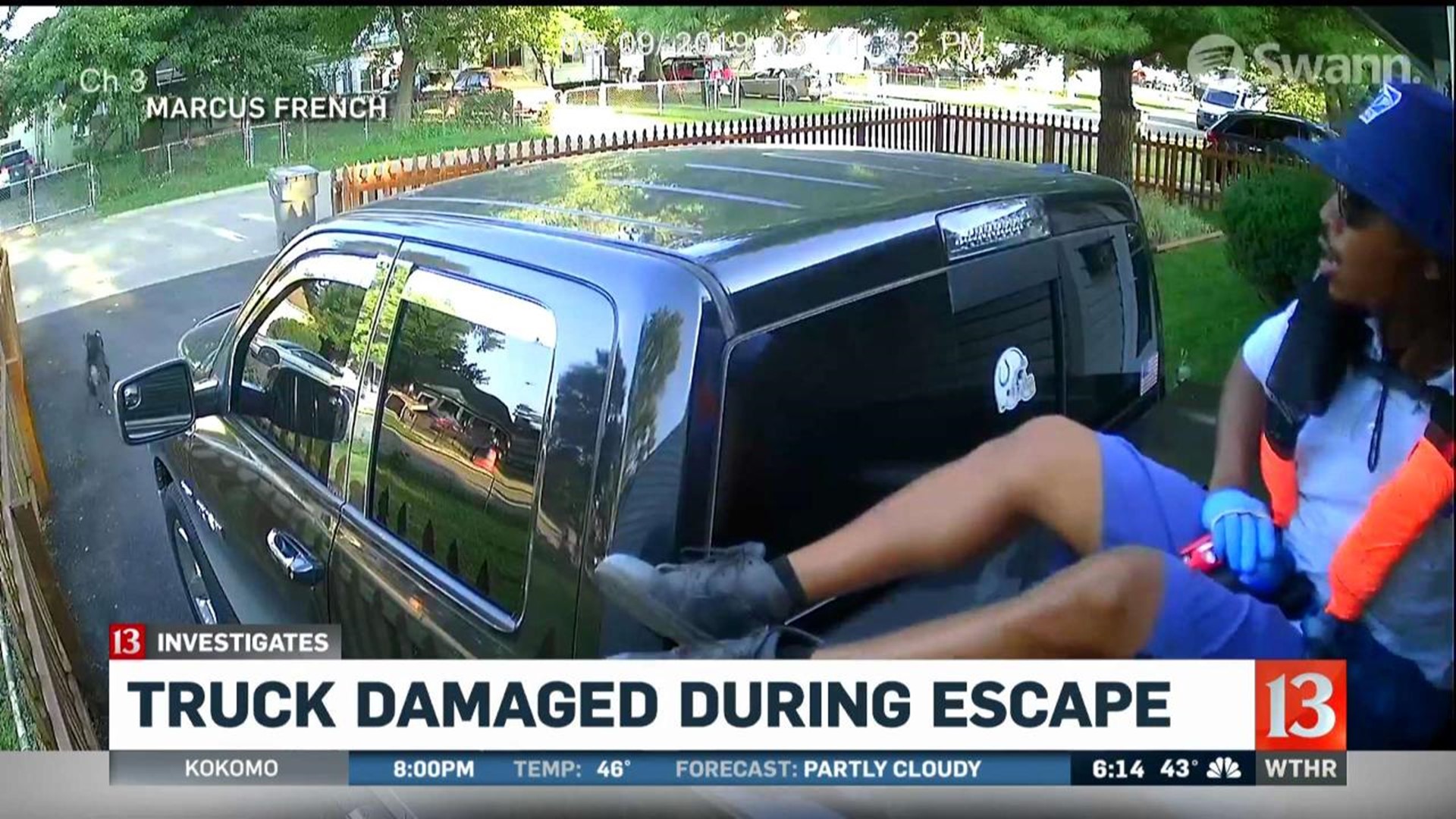 All across Indiana, dog owners are supposed to keep their pets on a leash when the dogs are not on their own property.

When those rules are broken, people and pets often get hurt.

13 Investigates also found neighbors getting caught in the fray and paying a big price. That's what happened in one southeast Indianapolis neighborhood.

No one saw it coming.

One minute, a local mail carrier was walking briskly along his route; the next, he was in sheer panic as two vicious dogs tore out after him from a house across the street. The incident was all caught on dual cameras outside the carport where Marcus French lives.

"I remember my mom yelling, 'Hey did you grab the mail on your way in? And by the way the alarm on your truck's going off,'" French recalled.

The mailman was safe, but shaken on the back of French's prized 2010 custom Dodge Pickup. He had two cans of mace spray on his belt, but didn't have time to use them.

French took dozens of pictures to show the scratches and dents caused by the mail carrier's bag.

In all, the repairs totaled more than $4,400. According to the estimate, the custom-faded, two-tone paint can not be duplicated. The shop that provided the estimate said the entire left side of the truck would have to be repainted.

French filed a claim with the United States Postal Service days after the incident last September.

Just weeks ago, nearly six months after submitting his complaint, he finally got his answer.

"An investigation of this matter failed to establish a negligent act or omission on the part of the U.S. Postal Service or its employees. In addition, your neighbor's 'at large' dog was in violation of Indianapolis Indiana's Leash Ordinance Code 531-102. While we regret any damages or injuries that may have occurred, we cannot accept legal liability for them. Accordingly, this claim is denied," read the letter.

French was left with just two options: File a lawsuit against his neighbors, or make a claim on his own insurance for the repairs and then have his insurance company go after the dogs' owners. He's not satisfied with either choice.

"The post office should pay for it and go after (the neighbors) for the money," insisted French. "I'm the innocent one and I don't want to cause a conflict with my neighbor."

Under the Indianapolis/Marion County leash law, an "at large" dog could result in a fine of at least $100.

French doesn't believe a monetary fine or the threat of one did anything to stop the dogs from creating havoc in the neighborhood.

"It kind of has been an ongoing issue with their dogs. I mean, Animal Control is aware of it," French told 13 Investigates. "A week after the situation with my truck, (the dogs) did kill another neighbor's dog. They still have the dogs to this day."

He worries the next person may not be as fortunate as the mail carrier who found safe refuge from an attack on top of his beloved pickup truck.

"I do understand that there's a leash law, it just makes me wonder where is the line drawn in a situation like this?" questioned French. "Those aren't my dogs. I'm not responsible for that."

13 Investigates was not able to reach the dogs' owners. The property does have a fence, but it is not a secure enclosure and that too is a possible violation.

The fines in Marion County range from $100 per violation up to $500 if another animal or person is injured. A court could also request an animal be forfeited or put down and under the state's dog bite liability law, the owners could face criminal charges.

The only exceptions are generally visits to a dog park. But owners are required to have their dogs leashed and in control in public parks or on public walking paths. Hamilton County, for example, has a public nuisance ordinance with fines of $1,000.