Juvenile courts across the state are now learning the exact cases impacted by fraudulent drug tests used by the Department of Child Services. 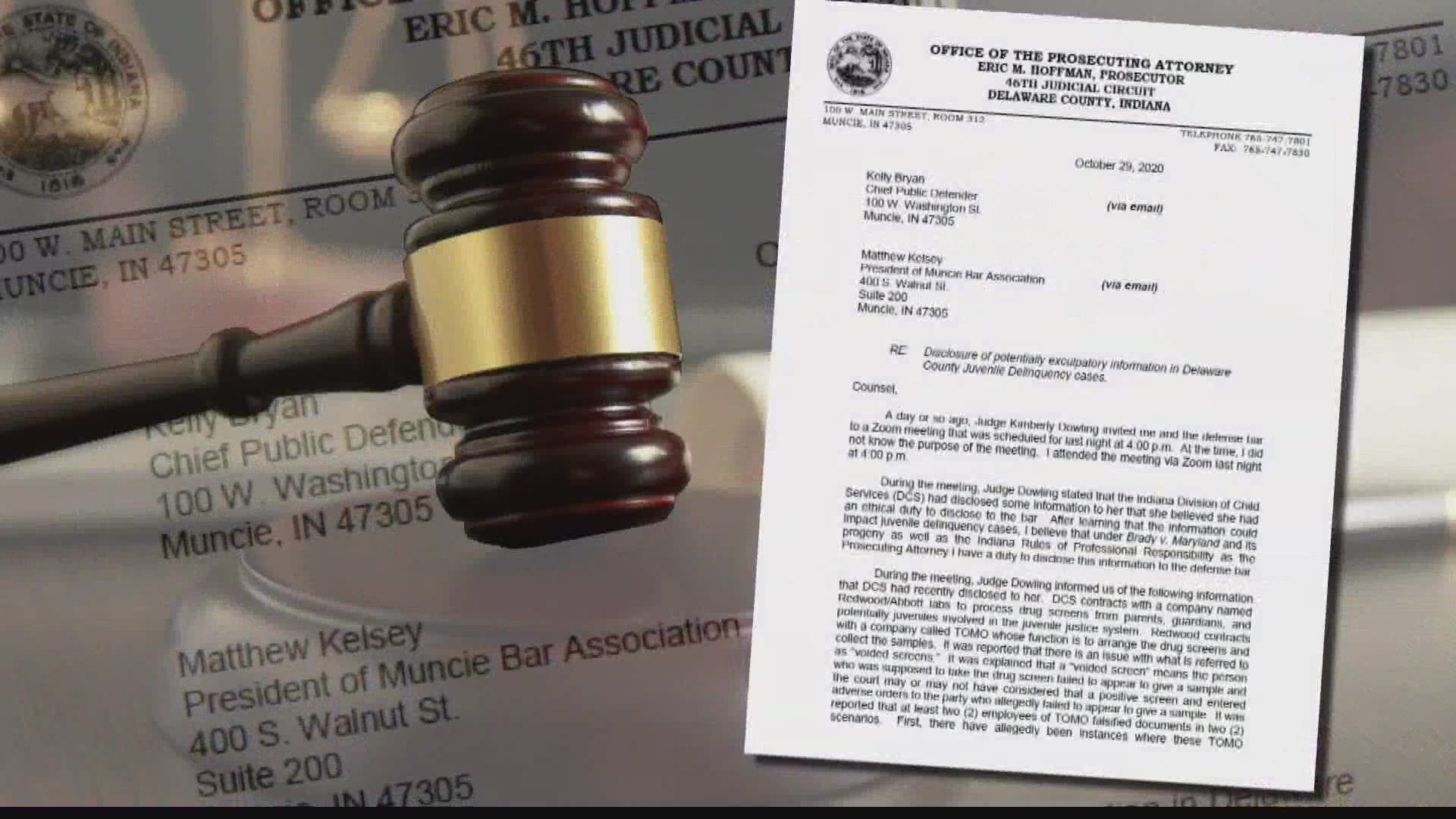 INDIANAPOLIS — Juvenile courts across the state are now learning the exact cases impacted by fraudulent drug tests used by the Department of Child Services.

The information has also prompted an arm of the Indiana Supreme Court to weigh in on the fallout. At the same time, DCS claims its own access to drug screen data is limited.

Letters citing potential fraud are in the mail and on the way to juvenile courts and prosecuting attorneys across the state.

DCS told 13 Investigates it was "notifying the presiding judge in every instance of the potential for an inappropriately voided test."

13News first told you about those tests in October.

Parents in the DCS system were marked with "voided tests" for failing to show up for drug screens, when in fact they were never notified of the appointment.

In some cases, workers assigned to collect the sample failed to show up.

The Indiana Supreme Court is weighing in on what it means for courts. In a statement, the Supreme Court's Office of Judicial Administration said:

"Indiana trial court judges have been informed about the falsification of drug-screening records by a DCS subcontractor. It is not appropriate for us to discuss any specific cases, but from a procedural standpoint, trial court judges are aware there could be case implications related to the information released by DCS."

The reaction by Indiana's judiciary doesn't stop there.

The Indiana Council of Juvenile and Family Court Judges said it is "Working on a recommended proposed action plan for judicial officers who have Redwood drug tests offered for submission in cases."

It's an important distinction, as parents fighting to stay in their children's lives raise concerns about Redwood Toxicology and its subcontractors, Tomo Drug Testing and Jones Labs.

"Enough is enough. And light needs to be brought upon everything that's going on here," said Charlie Solhan, a parent trying to follow the guidelines to regain custody of his children.

"DCS is not investigating Jones Labs."

Russell went on to explain why DCS could not answer questions about complaints at Jones:

"We do not have Redwood's records. They're a private business...that applies to both Tomo (and) Jones and any other subcontractor they might use. We aren't privy to those contracts."

Yet DCS has paid Redwood more than $12.9 million dollars just since July of 2019.

According to DCS, all referrals to Tomo have ceased.

Still the agency wants parents to report any problems related to Tomo or Jones drug screens to its county offices.

13 Investigates reached out to Abbott Labs that owns Redwood Toxicology. To date, the company has yet to respond to inquiries about the fraudulent drug screens.

Both DCS and Redwood Toxicology owe taxpayers an accounting for the two labs in Indiana, including Jones where allegations of fraud have now come to light.