The Indiana Tobacco and Alcohol Commission and its enforcement agency, the Indiana State Excise Police, have confirmed they are dismissing administrative cases filed against the stores for selling CBD oil. 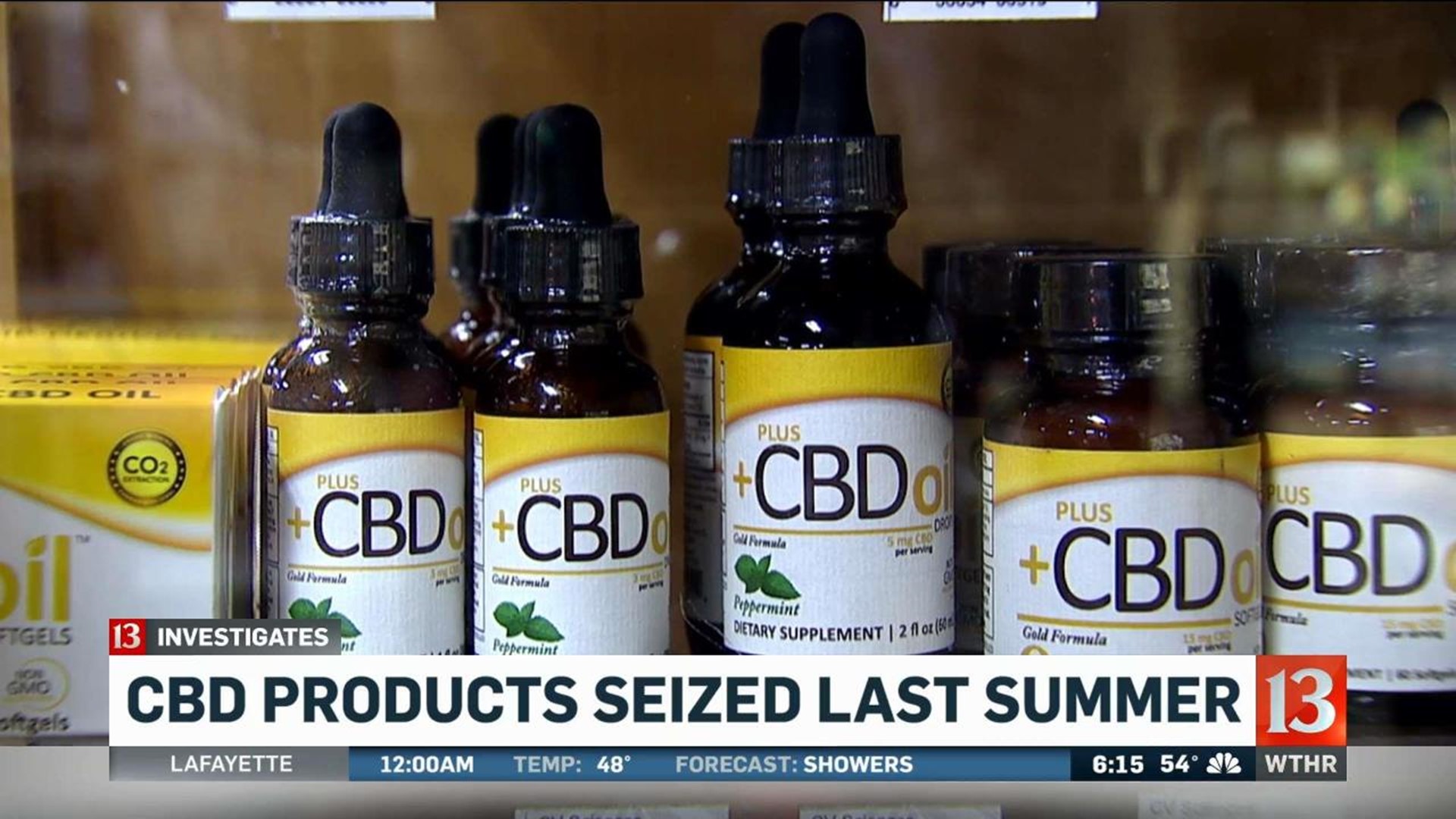 INDIANAPOLIS (WTHR) - Eyewitness News has learned a 9-month nightmare for dozens of Indiana businesses is about to end.

The Indiana Tobacco and Alcohol Commission and its enforcement agency, the Indiana State Excise Police, have confirmed they are dismissing administrative cases filed against the stores for selling CBD oil. The state will also dismiss threatened fines against those businesses and return tens of thousands of dollars worth of CBD oil products seized during surprise raids that took place in 2017.

The announcement comes just days after Governor Eric Holcomb signed a law that legalizes CBD oil in Indiana. The law is intended to clarify questions about the legal status of the herbal supplement – questions that triggered an emergency last summer for hundreds of retailers and thousands of consumers.

Excise agents claimed the stores were selling an illegal substance because CBD oil is made from cannabis, the same plant that produces marijuana. But CBD oil comes from a type of cannabis called industrial hemp, which differs from marijuana because it has little or no THC, the active compound in marijuana that causes users to experience a high. Store owners and their loyal CBD customers insisted recent actions by Congress changed the legal status of industrial hemp products, meaning CBD oil is legal in all 50 states.

After breaking news of the springtime CBD raids, WTHR asked State Excise Police, Indiana’s attorney general and the governor’s office to clarify whether CBD oil is legal in Indiana or not. 13 Investigates discovered none of them were able to provide an answer.

“It's a complicated issue and we're trying to work through it and figure out what the rules are,” admitted ATC chairman David Cook, who said last summer his agency would suspend all CBD raids until it could get legal clarification.

“There is a lot of confusion about this topic, even within state government,” said attorney general spokesman Jeremy Brilliant, pledging the AG’s office would study the topic and issue an opinion.

That opinion came in November, when Attorney General Curtis Hill announced he believed CBD oil products were not legal to sell or possess in Indiana. Sensing a crisis for thousands of Hoosiers who had been using CBD oil for years to ease their pain, seizures, anxiety and other medical symptoms, the governor stepped in. He ordered a moratorium on CBD oil enforcement to give state lawmakers time to change – or at least clarify – Indiana law.

Earlier this month, the Indiana General Assembly passed Senate Bill 52, legalizing CBD oil with low levels of THC for all Hoosiers. The governor signed the bill into law last week. Now that CBD oil is legal, State Excise Police decided to dismiss fines against Fresh Thyme and other businesses and to return their CBD products that have been sitting in an evidence room for nearly nine months.

“Indiana State Excise Police will be returning CBD products to respective retailers in a timely manner,” ATC spokeswoman Lindsay Devlin told WTHR in an e-mail. “Retailers that were cited last summer with regards to CBD oil will not be imposed to any fines.” [sic]

The announcement comes as welcome news to local stores, which could have lost thousands of dollars each if the state had proceeded with its enforcement.

“That’s huge. That will help us out a lot because that was a lot of product, a few thousand dollars, they took out of here,” said Rita Blackburn, the manager of an Indianapolis smoke shop that excise police raided last spring. “To think they come in here when we’re trying to follow all of the rules and say we are possessing marijuana, that’s just ridiculous. Yes, we want our products back.”

“CBD oil is an important product to our customers, so being able to put it on our shelves without any worry is a big relief for us,” added Fresh Thyme director of operations Greg Johnson. The retailer said its Indiana stores have experienced a “significant growth” in CBD oil sales since Gov. Holcomb signed a law that legalized the product a week ago.

State Excise Police declined to meet with 13 Investigates to discuss the dismissed cases against retailers, but Devlin told WTHR the agency will begin returning confiscated CBD products to stores this week. She said all seized products will be returned by April 15.

While CBD oil is now legal in Indiana, retailers should expect more surprise inspections by State Excise Police this summer. Indiana’s new CBD law requires manufacturers to meet strict labeling requirements beginning July 1. After that date, any retailer who sells CBD oil that fails to meet the new labeling guidelines is subject to harsh penalties. No legal action can be initiated on CBD oil labels through the end of June, but it will most likely be State Excise Police enforcing that law starting in early July.