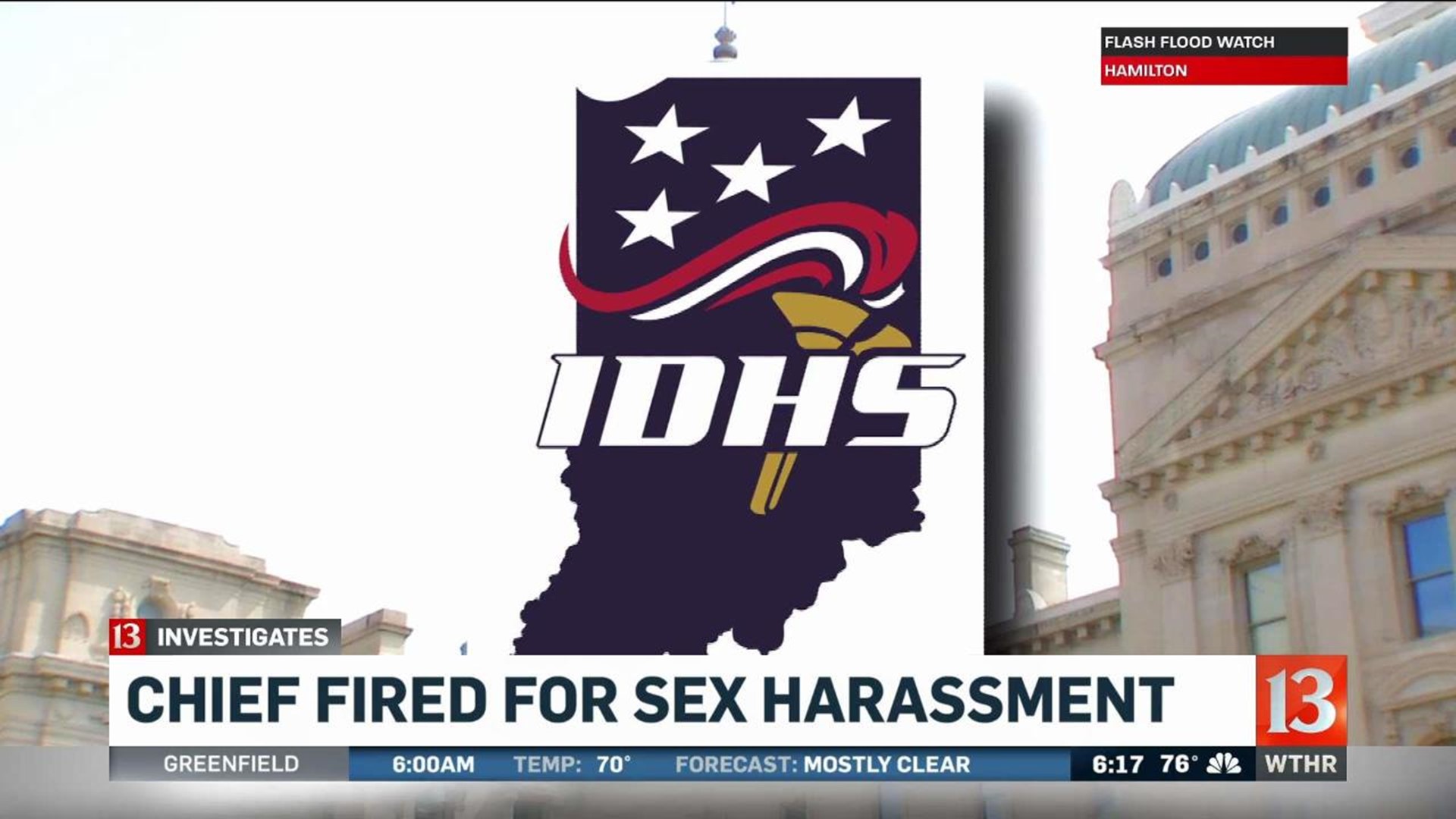 INDIANAPOLIS (WTHR) — A state agency that's supposed to keep you safe during national disasters and keep buildings and amusement rides up to code is itself in crisis.

Insiders and former employees reveal mistrust and dishonor behind closed doors at the Department of Homeland Security.

13 Investigates discovered DHS employees who say there's a culture of sexual harassment and retaliation for those who dare tell.

"You have the 'clique,' the 'good ole boy system,'" said Barbara Goble, a longtime DHS employee. "There are things that would happen that would make you go 'hum?'" she told 13 Investigates.

Goble worked in the Fire Marshal's office for 17 years handling firefighter certifications before she retired in late March.

According to Goble and several inside sources, a group of women, mostly temps, complained about vulgar conversations from a member of the Fire Marshal's executive staff.

13 Investigates confirmed the complaint was against David Smith, the Code Enforcement Section Chief.

Smith was terminated on February 15, 2017 for violation of Indiana's Workplace Harassment Prevention Policy. A group of female temp employees complained about vulgar language and conversations involving Smith. His salary at the time: $64,644.

"Everybody answers to the State Fire Marshal," said Goble, explaining the power she and others believe Greeson has at DHS.

Sources tell 13 Investigates the women didn't trust Greeson with their complaint and reported it to Robert Johnson, the Assistant Fire Marshal.

Johnson also sent the complaint up the chain to the Department of State Personnel.

"They had to take it outside the agency to get something done," said Goble. She believes Smith would still be working at DHS if it was left up to Greeson.

Then there was fallout in the Fire Marshal's Office.

"Robert Johnson, they just did him wrong," said Goble, echoing what at least a half dozen insiders told 13 Investigates in private.

Two weeks after Smith was fired, the assistant fire marshal, who followed the rules and reported the sexual harassment claims, was told his job was eliminated.

"Everybody's sitting back going 'Wow, they can do that to anybody,'" she said, recalling the reaction within the office.

"It's just a shame at how it all unfolded," said Robert Johnson, the former State Assistant Fire Marshal.

13 Investigates caught up with Johnson in Bloomington.

"I was shocked, angry, upset," said Johnson, recalling the Wednesday afternoon he was called to a meeting to learn his job would be eliminated on Friday of that same week.

Johnson told 13 Investigates he handled the women's complaints the way he was directed to by then DHS Director David Kane.

"They approached me with an issue that I thought was very important and needed to be addressed. (I) had a quick meeting and the Marshal said he would look into it," revealed Johnson. "What Marshal Greeson did with that complaint, I had no idea."

Johnson now believes reporting the complaints cost him his job.

"I was told that my position was being eliminated that they were re-purposing those funds in my position. So I had 48 hours notice that I would no longer have a job," he explained.

Department of State Personnel records say Johnson resigned. Johnson says that's because he was told it would be easier to get his benefits if he resigned.

Despite what happened, Johnson says reporting the behavior was the right thing to do.

"If I had to do it over again I would do the same thing," he told 13 Investigates.

Dean received a letter of reprimand for unprofessional behavior and using State resources for communication unrelated to State business on March 20, 2017. Dean sent an inappropriate email to the arson secretary. He was the Chief Arson Investigator who earned $72,256 annually before retiring from DHS on May 31, 2017.

Yet the action taken by the State wasn't enough to curb some behavior.

After Dave Smith was fired on February 15, 2017 and sexual harassment training was mandated, Bob Dean, Chief Arson Investigator, hit send on an email obtained by 13 Investigates as part of an open records request.

The subject line on the email said: "Could not resist."

What Chief Dean could not resist was sending the inappropriate photo to the arson unit secretary.

He wanted her and others to see a scantily clad, large woman next to a suggestive caption.

According to DHS, the Arson Chief was disciplined. He received a letter of reprimand for unprofessional behavior and using State resources for communication unrelated to State business.

Compare Dean's discipline and the timing of his infraction to what happened to Barb Goble. In 2008 she sent an email to another staffer about inappropriate interoffice relationships and was suspended for 14 days.

An Administrative law judge reduced it to a 5 day suspension on appeal.

Goble who made $38,472 before her retirement says there's a double standard at DHS, and she blames Greeson.

"He controls everything," she said of Greeson. "Everything!"

Robert Johnson told 13 Investigates he has moved on with his life. But he said, "The Governor needs to look at the Department of Homeland Security as a whole 'cause I think there are people there that have their own agenda and don't have the state of Indiana at heart."

Both State Fire Marshal Greeson and the Homeland Security Director Bryan Langley declined to speak with us about the agency.

The Assistant Fire Marshal's position remains empty. Robert Johnson says he has returned to his favorite profession, working with another Indiana Fire Department.

Bryan J. Langley, the Executive Director of the Indiana Department of Homeland Security released a statement to 13 Investigates:

“I started as Executive Director with IDHS in January 2017. When I, and my staff, became aware of reports regarding staff members acting inappropriately, we took action and investigated these allegations. If the conduct could be substantiated by the factual findings of the investigation, individuals received corrective action, up to and including termination.

In the last several months, IDHS has expanded its efforts to provide a variety of mandatory, in-person training, to include topics such as:

These trainings reinforce the State’s expectations and encourage professional behavior in the workplace. It is important to me that employees know that they can report any unprofessional behavior, and that concerns will be taken seriously and looked into thoroughly.”