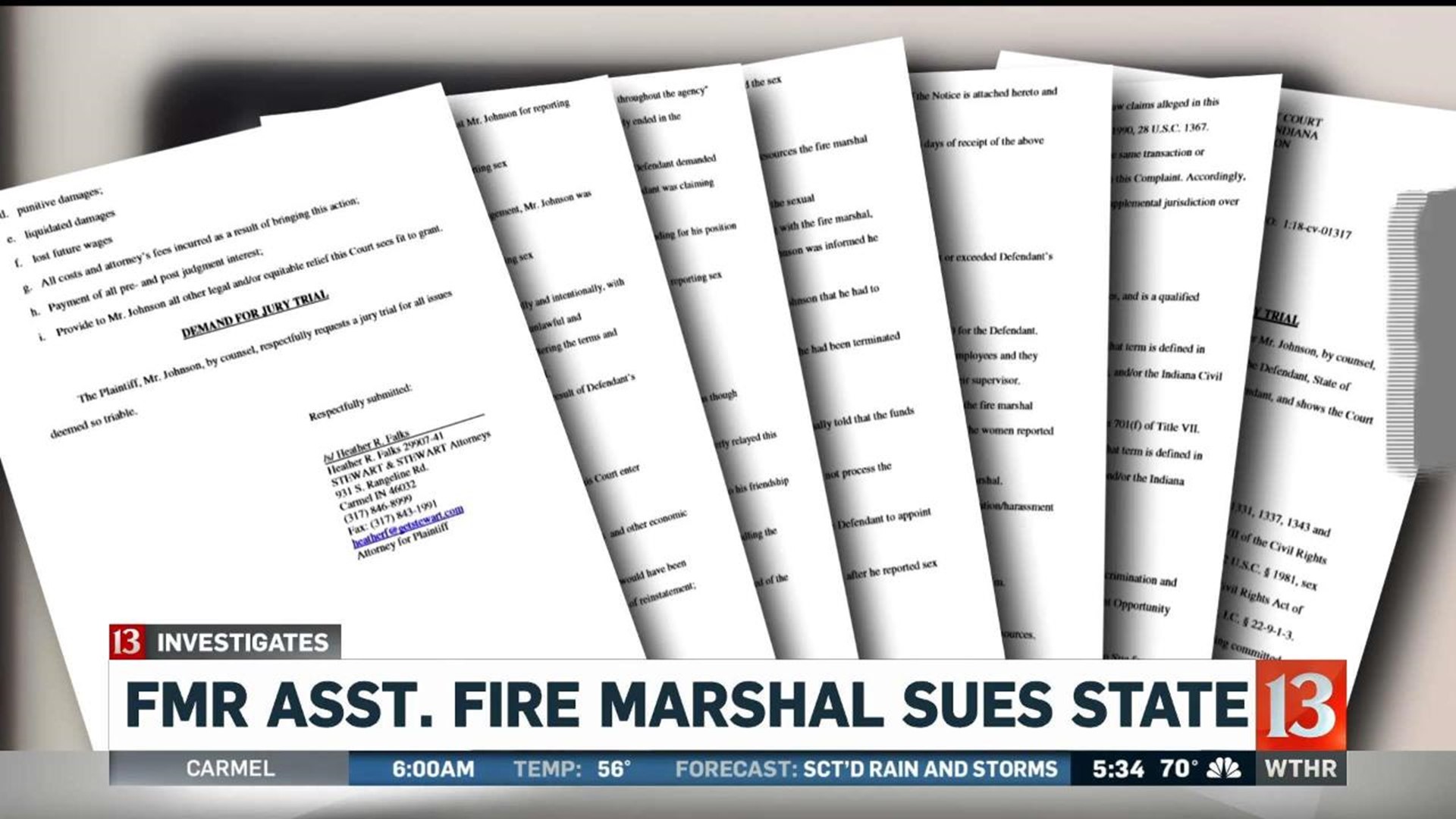 13 Investigates broke the story of sexual harassment against a high ranking leader at the Department of Homeland Security last year, amid claims of retaliation.

Now the employee who reported the allegations is asking a court to give him his job back, to make amends.

Robert Johnson wants to return to his role as the Assistant Fire Marshal for the State of Indiana.

In a seven page lawsuit filed against the State of Indiana and the Department of Homeland Security, the career firefighter said he was "intentionally terminated... in retaliation for reporting sex harassment" in March 2017.

"I was shocked...angry...upset. It's just a shame at how it all unfolded," Johnson told 13 Investigates months after he left the Department of Homeland Security.

According to inside sources who spoke with WTHR, Johnson's problems all started after several employees raised concerns about a culture of sexual harassment at D-H-S. A half dozen employees complained to 13 Investigates about questionable emails, crude jokes and vulgar conversations.

"You have the 'clique' the good ole boy system," said former employee Barbara Goble in June 2017. "There are things that would happen that would make you go Hum?," she said describing her concerns about the agency.

Goble was also there when a group of temporary workers complained about inappropriate conversations by Code Enforcement Section Chief David Smith.

Sources told 13 Investigates the women were afraid to report the allegations to Fire Marshal Jim Greeson because Smith was a member of Greeson's executive staff and his friend.

According to the lawsuit, the women informed Johnson "they were being sexually harassed by their supervisor."

Johnson then took the claims to Greeson. According to the lawsuit Johnson said "The fire marshal did nothing with the information...never had an investigation opened...and did not report the sex harassment to human resources."

That's when Johnson decided to make the report to Human Resources himself. After an investigation, Smith was fired from his job.

Johnson told 13 Investigates reporting the allegations "was the right thing to do," and said he would do it all over again if he had to.

But two weeks after Smith was fired, Johnson said he was called into a meeting with Greeson and Human Resources and told he was being terminated because the money for his position as Assistant Marshal was being "repurposed." 48 hours after that meeting Johnson was also out of a job.

Johnson is now asking to return to his position, and for back-pay.

According to the lawsuit, the money for the Assistant Marshal was never repurposed and Johnson had no prior performance issues.

Johnson told 13 Investigates that he eventually signed a letter of resignation because he says he was told that was how he could keep his benefits.

Johnson's attorney declined to comment on the lawsuit. 13 Investigates has also reached out to DHS and agency attorneys for comment.