A Hamilton County photographer is facing charges over a bottle of CBD oil as state officials debate if the oil is even illegal in Indiana. 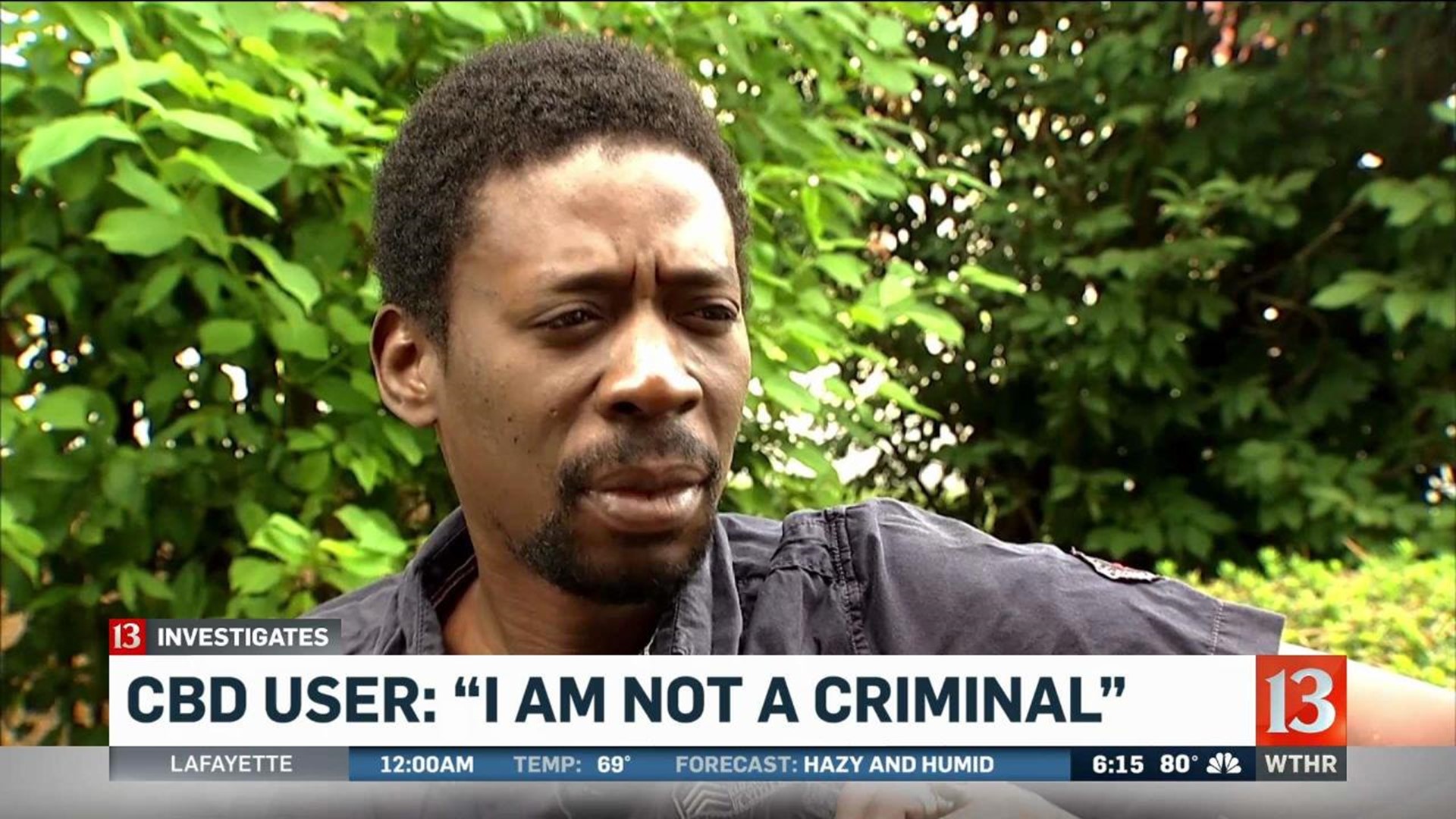 HAMILTON COUNTY, Ind. (WTHR) - A month after being handcuffed, Mamadou Ndiaye says he still remembers the traffic stop as if it happened yesterday.

“I was scared. I've never been handcuffed,” he said. “That's the worst part. I feel like my freedom was taken away.”

The 41-year-old photographer and filmmaker had just left his job in Carmel and was driving home along northbound U.S. 31 when he was stopped by a deputy from the Hamilton County Sheriff’s Department. He says he was unknowingly driving on a suspended driver’s license due to a misunderstanding. So even when the officer called for additional backup, placed the anxious driver in handcuffs and asked to search his car, Ndiaye said he had nothing to fear.

“I didn't have anything to hide,” he told WTHR. “I'm not a criminal. I've been in this country 17 years, never been in trouble.”

Moments later, that all changed. Deputies did not write a citation only for the driving offense; they also charged him with possession of marijuana.

“They never found marijuana in my car,” Ndiaye said. “The only thing they saw was the bottle of CBD oil. I didn’t think that CBD would ever give me trouble.”

The traffic stop and criminal charge came weeks after a WTHR investigation prompted state officials to admit they aren’t sure whether CBD oil is legal or not.

And it adds more urgency for lawmakers and Indiana’s attorney general to settle an issue that is now baffling many police agencies and prompting some to impose a moratorium on CBD oil enforcement.

Not the same as marijuana

CBD oil and marijuana do have something in common: both come from a cannabis plant. But there's also a huge difference.

Marijuana comes from cannabis that contains high levels of THC, and it can trigger a “high” feeling in those who smoke it. In contrast, CBD oil comes from a variety of cannabis referred to as industrial hemp, which has little or no THC and causes no high at all.

Families across Indiana say they’ve been using CBD oil for years to effectively treats chronic pain and anxiety – in some cases, allowing them to wean off addictive pain killers that have many serious side effects. Ndiaye got a bottle of the bright yellow oil to see if might regrow hair on a small bald spot on the back of head.

“Because where I’m from, they say hemp will grow hair,” the Senegal native told Eyewitness News.

Ndiaye says the CBD oil did not work to grow hair. But the controversy surrounding the product seems to be growing daily because police and state leaders can't seem to agree on the law.

This summer, 13 Investigates exposed a series of raids by Indiana State Excise Police officers, who confiscated tens of thousands of dollars in CBD oil from grocery stores, gas stations and smoke shops across Indiana.

The WTHR investigation prompted a meeting of state officials with the governor’s office to discuss the ambiguity and confusion in Indiana law regarding CBD oil. Soon after, the state’s Alcohol and Tobacco Commission ordered excise police to end their raids.

“It's a complicated issue, and we're trying to work through it and figure out what the rules are,” said David Cook, chairman of the Indiana Alcohol and Tobacco Commission. “We’re trying to determine the legality. There’s differing legal opinions whether it’s legal or not, so until those issues are resolved, we’ve placed a moratorium on confiscating it.”

Indiana State Excise Police now say, at least for now, they will only confiscate CBD oil products that contain more than .3% THC. Some law enforcement agencies say any product with less than .3% THC is considered within the permissible limits of state and federal laws that permit the production and sale of industrial hemp products – and also allow states to grant agricultural, business and educational waivers for researching and growing industrial hemp.

It is not clear when the attorney general will issue his guidance.

The Hamilton County Sheriff's department told WTHR it used a marijuana test kit to test Ndiaye’s bottle of CBD oil during the traffic stop. According to court records, a sheriff’s deputy “was able to identity the substance seized” as marijuana thanks to that test.

But it is unclear exactly what that field test detected.

WTHR obtained the same brand of CBD oil that deputies seized from Ndiaye and sent the oil to a certified laboratory that specializes in testing cannabis-related products. 13 Investigates asked the lab to determine the CBD oil’s total concentration of THC – the psychoactive compound in marijuana that concerns many lawmakers, police officers and prosecutors.

“We found essentially nothing. It’s so low, I can’t even detect it,” explained Dr. Lev Spivak-Birndorf, PSI’s chief science officer. “If there is any THC, there’s less than 2 milligrams in that entire bottle -- at a maximum – and it’s actually probably more like less than a fraction of a milligram. So at the most, we’re talking less than .01 weight percentage, which means there’s nothing there.”

“It’s unbelievable that CBD oil with no THC in it could land someone in so much trouble,” said PSI Labs co-founder Ben Rosman. The Michigan lab conducts testing on thousands of CBD oil products annually, and Rosman said most manufacturers are very careful to ensure products labeled as sourced from industrial hemp do not contain unforeseen THC.

“These companies build their reputation on what their marketing is, so if they say it’s CBD oil only and it turns out it has THC in it, not only are they letting down their consumers, but they are subjecting themselves to state and federal liability,” Rosman said.

The test results come as welcome news to Ndiaye, who laughed, then broke into tears when WTHR told him of the lab report. He has waived his preliminary court hearing and now has a bench trial date set for early December.

Ndiaye hopes the test results might help convince the Hamilton County prosecutor’s office to drop his possession of marijuana charge.

“I’m not a drug addict. I’m not trying to break the law with CBD. I was not guilty of any crime, so I hope the prosecutor will review my case,” Ndiaye told WTHR.