Daniel Dougan has fond memories of his recent trip to North Carolina, where he and wife enjoyed a long weekend getaway. 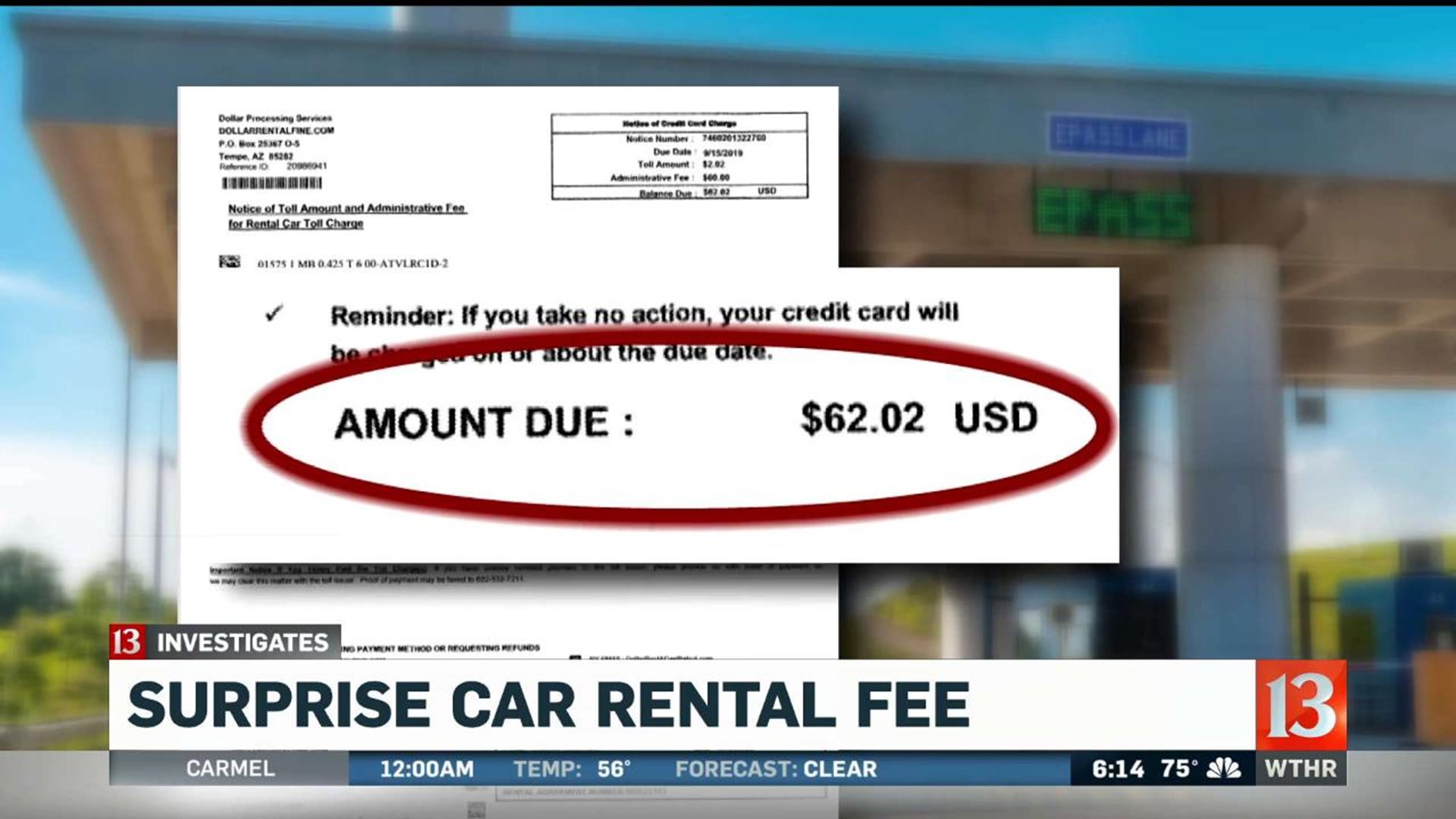 Daniel Dougan has fond memories of his recent trip to North Carolina, where he and wife enjoyed a long weekend getaway.

“It was a fun trip. We went to the beach. Got a little sun. Had a great time,” he said, sharing photos of his vacation.

But the photos aren't the only mementos Dougan has from his time in North Carolina. He also has a souvenir from a rental car company.

“I was totally blindsided by getting this bill in the mail. It's a bill for $62.02,” Dougan told 13 Investigates.

Dollar Car Rental sent the bill – which arrived several weeks after Dougan already paid $300.81 for a 4-day rental – because Dougan drove on a toll road. While driving near Charlotte, he incurred four toll charges. Each was small: 40 cents, 48 cents, 85 cents and 29 cents, totaling $2.02 in toll charges. Dougan’s surprise came when he noticed the invoice also included a $15 charge for EACH toll he incurred during his trip. Four small tolls resulted in $60 in “administrative fees” added to the bill.

This is the bill Dougan received for the tolls. (WTHR Staff)

13 Investigates has discovered thousands of other rental car customers have also faced surprisingly steep fees for driving their rental cars on toll roads, resulting in legal action and settlements in several states. Avoiding those fees can be difficult unless you understand a complex set of policies and plan ahead.

Dougan believes he and other consumers are not adequately informed about their options related to rental car toll fees.

Searching for the least expensive rental car he could find, Dougan reserved a rental car with Dollar before flying to Raleigh-Durham International Airport. He said once he arrived at the rental car counter, a Dollar employee asked where he planned to drive. Explaining that he and his wife were headed towards Wilmington and the Outer Banks, the reservation agent commented that Dougan would not encounter any toll roads along that route. Dougan said there was no discussion about what would happen if he did drive on a toll road – let alone the options available and the high fees he would face.

"That never came up at the rental counter,” Dougan said.

The cost of the tolls and what Dougan was charged. (WTHR Staff)

So when Dougan and his wife decided to leave Carolina Beach in their rented Kia Rio to head to Charlotte for a day of exploring, they were both unaware and unprepared for the toll charges they would encounter along the way.

“I tried to avoid tolls but ended up on a toll road,” Dougan said. “It was all automated so there’s no toll booth to pay cash or anything. There’s no person there to take your money. It’s all automated with cameras, so I just assumed they’d bill me for whatever amount the tolls were and might tack on a little fee.”

The fee was not little, and Dougan does not understand why a rental car company would assess such a high penalty when he was not offered alternatives.

“They just do it because they can,” Dougan said. “Quite frankly, I think Dollar should be ashamed of themselves for doing this. I feel it’s a scam.”

It’s in the fine print

Dollar defends its toll charge policy and said those charges are spelled out in the contracts signed by its customers.

According to that contract, customers have the right to request the company’s PlatePass service, an optional electronic toll payment service “whereby all toll charges and any toll-related fees you incur during the rental period are covered by a daily or weekly PlatePass all-inclusive rate.” The rate varies between $8.99 and $21.49 daily, depending on where you rent your car.

Reading further down in the contract, renters will find this information in tiny print: “If you decline the optional PlatePass All-Inclusive service at the commencement of the rental period, but still use electronic toll roads and/or bridges during the rental period (including "cashless" or all electronic toll roads and bridges as noted above), you will be liable for and we will charge you: (a) all tolls incurred for such use (at the highest, undiscounted applicable toll rate); (b) a $15 administrative fee for each toll incurred (subject to a $90 cap for such toll-related administrative fees for the rental period); and (c) all other applicable toll charges or fees, if any.”

Dougan acknowledges the information was included in his contract and that he did not thoroughly read that contract at the time of his rental. But he does not think that dismisses Dollar of any responsibility. He believes the company’s rental counter agents should verbally notify customers of their options and fees.

“They know nobody reads all of that information in a contract, especially when you’re in a long line at the rental car. So whether it’s in the contract or not, they’re relying on people being unsuspecting of this,” Dougan said. “Buried in the fine print, you don’t know what’s going to happen if you go through a toll, especially one you can’t pay because there’s nobody at the toll booth.”

Asked why the company charges the $15 fee for each toll incurred, a Dollar spokeswoman sent WTHR a statement, explaining “it offsets the time and labor costs associated with handling toll violations, identifying the correct renter and account and paying the local toll authority. It also helps recover the cost of providing the product – installing, maintaining, repairing and removing the units when cars rotate out of our fleet, as well as working with local toll authorities to pay for tolls incurred.”

“The PlatePass terms, including the potential fees, are clearly stated in the rental agreement, displayed on the brands’ websites, shown on written signage and digital materials at the rental counter, and placed in the car at specific locations. We take these steps to make sure customers are informed about the benefits of PlatePass, as well as the potential fees that may be incurred by customers who decline PlatePass but nonetheless use electronic tolls during their rentals."

Facing backlash from consumers, Dollar and its sister company Thrifty Car Rental recently settled a lawsuit filed by the Florida Attorney General, who claimed the companies were taking advantage of customers with misleading toll fees.

“Companies owe it to their consumers to be upfront about all of their services and the prices and fees that accompany them. This case not only affected Floridians, but people visiting Florida from all over the country. I am hopeful that this settlement will provide relief to consumers harmed by the company’s actions and prevent future harm,” attorney general Ashley Moody said when she announced the settlement in January.

According to a press release, the agreement requires Dollar and Thrifty to “clearly and conspicuously” disclose their toll and PlatePass fees to consumers. Clear disclosures of the fees and charges must be provided on the company websites, online reservation paths, confirmation emails and at the rental counters. Dollar and Thrifty must also explain how consumers can avoid these charges.

In June, Chuck Oakwood flew from his home in northern Florida to South Bend International Airport, where he rented a car from Dollar to visit family in Illinois.

“I asked about tolls because I knew I’d be going to Chicago,” Oakwood said. “I was told to go ahead and use [the toll transponder in the car] and I’d be billed separately.”

A few weeks after he returned home, Oakwood received a bill for approximately $27 in tolls, plus an additional $90 for administrative fees.

“You look at your credit card and you say ‘Whoa! What’s this?’ I expected the tolls, but not the fees,” Oakwood said. “It’s a hidden fee trick. When you’re renting a car with a long contract, no one looks at that. There was no mention at all that they would charge a penalty. It’s quite a hustle. They basically do a bait and switch at the counter.”

When Oakwood complained, Dollar agreed to reduce the administrative fees to $45, but he still filed a complaint with the Indiana Attorney General’s office for what Oakwood considers to be an unfair business practice. Contacted by 13 Investigates, the attorney’s general office would not confirm or deny whether it has launched an investigation into Dollar’s billing policies for toll charges.

Despite the Florida settlement, Dollar’s toll fee policies are still not clear to many consumers. This week, when 13 Investigates tried to place a reservation for a rental car in North Carolina through Dollar Car Rental’s online website, toll road options and fees were not visible without clicking a separate tab titled “Important Policy Information.” That revealed a $10.49 daily fee to participate in Dollar’s PlatePass program. The website also said customers who incur toll charges after declining to purchase the PlatePass option would be charged an administrative fee of $9.99 per incurred toll – less than the $15 fee amount added to each of Dougan’s tolls.

Several employees who work at rental car counters at the Indianapolis International Airport told WTHR they do not discuss toll charges with customers because there are no toll roads in central Indiana. But renters who drive two hours south to Louisville or two hours north to Chicago or the Indiana Toll Road are likely to incur tolls and unexpected fees that will be assessed weeks later.

What other rental car companies charge

Dollar and Thrifty are not the only rental car companies to charge addition fees for customers who choose to use toll roads. Each rental car company has its own policies and its own charges, and those charges are not always clear to consumers.

In addition to tolls, Hertz charges $5.95 for each day you incur a toll charge.

Avis and Budget charge $3.95 per day for a toll transponder -- whether you use it or not.

Toll convenience charges for Alamo, National and Enterprise can vary widely -- from $3.95 to $9.99 each day (including the cost of tolls), depending on where you rent your car.

In light of recent lawsuits, several rental car companies have reduced their fees and taken steps to make their policies more transparent. Yet rental car toll policies and fees can still be challenging to find – both online and at the rental car counter – unless you are specifically looking for them.

How to avoid the fees

The charges are avoidable – if you plan ahead.

Autoslash, an online website that helps consumers save money when renting a car, suggests the following steps to avoid toll charges when renting: