Thousands of Hoosiers are still trying to get the unemployment benefits they applied for months ago. 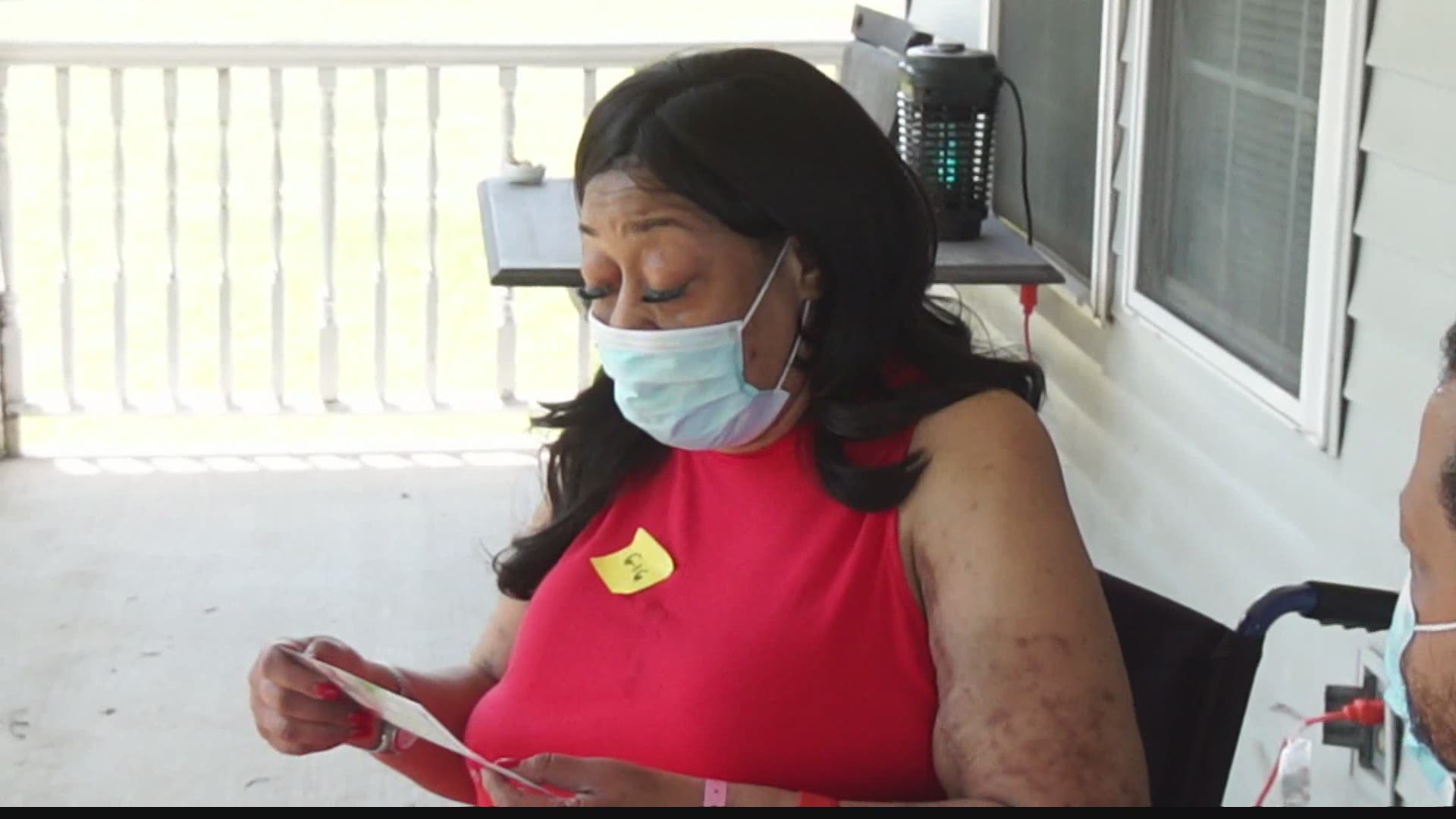 “I keep getting the runaround, and I don’t know what else to do because I'm in a financial crisis here,” said Clarence Brookins, who has not been able to work his cashier job at an Indianapolis gas station since March.

Brookins was forced to take a leave from work to care for his wife, who recently had surgery to receive a new kidney. Because of her compromised immune system, the west side resident must self-isolate during the COVID-19 pandemic. Brookins and his family have been counting on unemployment benefits to get through the pandemic, but he has not received a payment in more than seven weeks.

“I've been calling every week since April 26. Every week. I've been getting different people telling me different stories. I just don't where to turn,” he said, while pointing out the consequences have been very serious.

“Bills don't pay themselves. Basically I’m behind on everything. We have car payments, gas payments, utility bills,” Brookins told 13News. “I’m the sole breadwinner and I work hard. I work for everything I’ve got. But with all this going on and I’ve heard nothing from nobody at the state, what do I do if I can’t get federal income from unemployment? I’m between a rock and a hard place.”

Rhonda Taylor says the same thing. She's been applying for unemployment since April and hasn't seen a dime for two months.

“It’s been just a nightmare,” she said. “I've had to borrow money. I've used all of my savings on rent and bills and food, and I'm now at a point where I've had to ask for money just to live.”

Earlier this year, Taylor left her job at an Evansville non-profit agency and moved to Bloomington, where she started a part-time job at a winery. After working that new job for only two days, she was laid off due to COVID-19, prompting her to apply for unemployment insurance. She said DWD mistakenly recorded her as a full-time worker, and that error has meant months of delays and excuses.

“I’m now ten weeks out without a payment,” she told 13News. “They made the mistake but they can’t figure out how to fix it, and I’m completely at their mercy. It’s been very frustrating.”

Their stories are not unique. For months, families across Indiana have contacted 13 Investigates to say they are still waiting for unemployment insurance as the state continues to struggle with a huge increase in unemployment applications during the pandemic.

Their frustration comes as DWD says eligible applicants will be able to get an additional extension of their unemployment benefits for another 13 weeks.
Extended benefits were supposed to expire near the end of this month, but the U.S. Department of Labor has now approved an additional 13 weeks of unemployment for those who qualify.

Since early March, DWD says it has paid $2.8 billion in unemployment insurance benefits. Much of it has come from funding authorized by the federal CARES Act, which provided Pandemic Emergency Unemployment Compensation benefits for up to 13 additional weeks starting March 29. The extra federal funding, which provides another 13 weeks of extended benefits, will be available after the PEUC runs out. A separate federal program continues to provide an additional $600 per week to claimants until July 25.

Faced with a flood of unemployment claims at the start of the pandemic, DWD added staff and call center workers in an attempt to handle the sudden jump in applications. The agency says it has received more than 650,000 initial claims for unemployment insurance benefits in the past three months, and about 80% of those benefit payments are made within approximately 21 days of the claim.

But DWD acknowledges many cases involve complications or require further investigation that result in longer delays.

Why is it taking so long?

The agency provided some of the most common reasons why Indiana residents may be waiting to receive their unemployment insurance payments:

2. Deductible Income: Certain types of income that a claimant received must be deducted from benefit amounts. For example, a payout of vacation, severance, or other type of income. Result: When the Claimant enters the information correctly, DWD only holds the number of weeks in question. If the information is entered incorrectly, this issue requires further investigation, contact with claimant, and possibly with the employer.

3. Voluntary Quit from Employment without Good Cause: The claimant or employer indicated that the claimant voluntarily left employment for a potentially disqualifying reason, which may include simple voluntary quitting. Quitting a job voluntarily can be the deciding factor on eligibility. Result: Further investigation required, input from employer may be requested.

4. Employment Status: The claimant, employer, or an internal records search indicates the claimant may be working. Result: Further investigation required. Benefits are for those who are unemployed, or partially unemployed. Part-time status could result in partial payment, pending further review.

5. Clerical Errors/Missing and Incomplete Information: During the online application process, errors can be made. The more common ones can be, for example, a mistaken entry of a Social Security number or home address. Errors are also made on the employer end, an incorrect job code, for example. Result: DWD has installed special software to help catch such errors using automation and thus expedite the process. Those entries are automatically pulled and evaluated and, in most cases, resolved and pushed forward within days of initial entry.

6. Residency: The claimant, or a records match, indicated they are not a U.S. Citizen. DWD will confirm with the federal government whether the claimant legally earned wages, and whether the claimant is able to legally work during the benefit period. Indiana residency is also part of the investigation. Result: Further investigation required. Individuals who were not legally working, or who are not legally able to work while claiming benefits, are ineligible.

7. Fraud: Yes, unemployment insurance fraud is very real, and investigation of possible fraud is often necessary and does require additional time. Claimants receiving benefits who are called back to work and continue to file is a common example of fraud. DWD has an active fraud unit that investigates each case with a myriad of resources, and has a 98% successful fraud conviction rate. Result: Once convicted, fraudsters must meet several requirements in order to be eligible for benefits in the future, including complete repayment of any benefits received that were deemed fraudulent.

8. Appeals: As part of the unemployment insurance process, those who receive an initial ineligible determination have the right to appeal. The appeals process is more involved and requires additional time and research to be completed. Appeals are assigned to the DWD adjudication team to administer. Result: The record number of claims filed is also resulting in a record number of appeals. The adjudication team has been expanded and trained four-fold to render decisions on the appeals, all of which take additional time beyond the average 21 days.

Understanding the reasons for delays is important, but those reasons often are not explained to applicants desperately waiting for their benefits. And many applicants tell 13 Investigates they must endure extremely long wait times when they call DWD’s unemployment hotline, only to have their call disconnected before they receive answers.

Credit: WTHR
Clarence and Joyce Brookins of Indianapolis, who have been waiting for unemployment insurance for more than seven weeks.

“I've actually been put on hold for almost 3 hours,” Brookins told 13News. “And then everyone you talk to tells you something different. I keep hearing different stories that it’s going to come next week or it was just a glitch. They tell me not to worry, just keep filing, but I haven’t seen nothin'. I haven’t had a legitimate straight answer from anybody.”

Taylor said she was assured four weeks ago that her situation had been resolved.

“I talked to a supervisor and he said ‘We have everything we need from you. Everything is good on your end. We expedited your account and you should be getting all your back pay and answers very soon.’ That was May 20. Nothing has happened yet,” she said. “I continue to call every week and I’m still getting nowhere.”