Thousands of Hoosiers with disabilities cannot get the home nursing care that the state has already approved and paid for because there are not enough nurses. 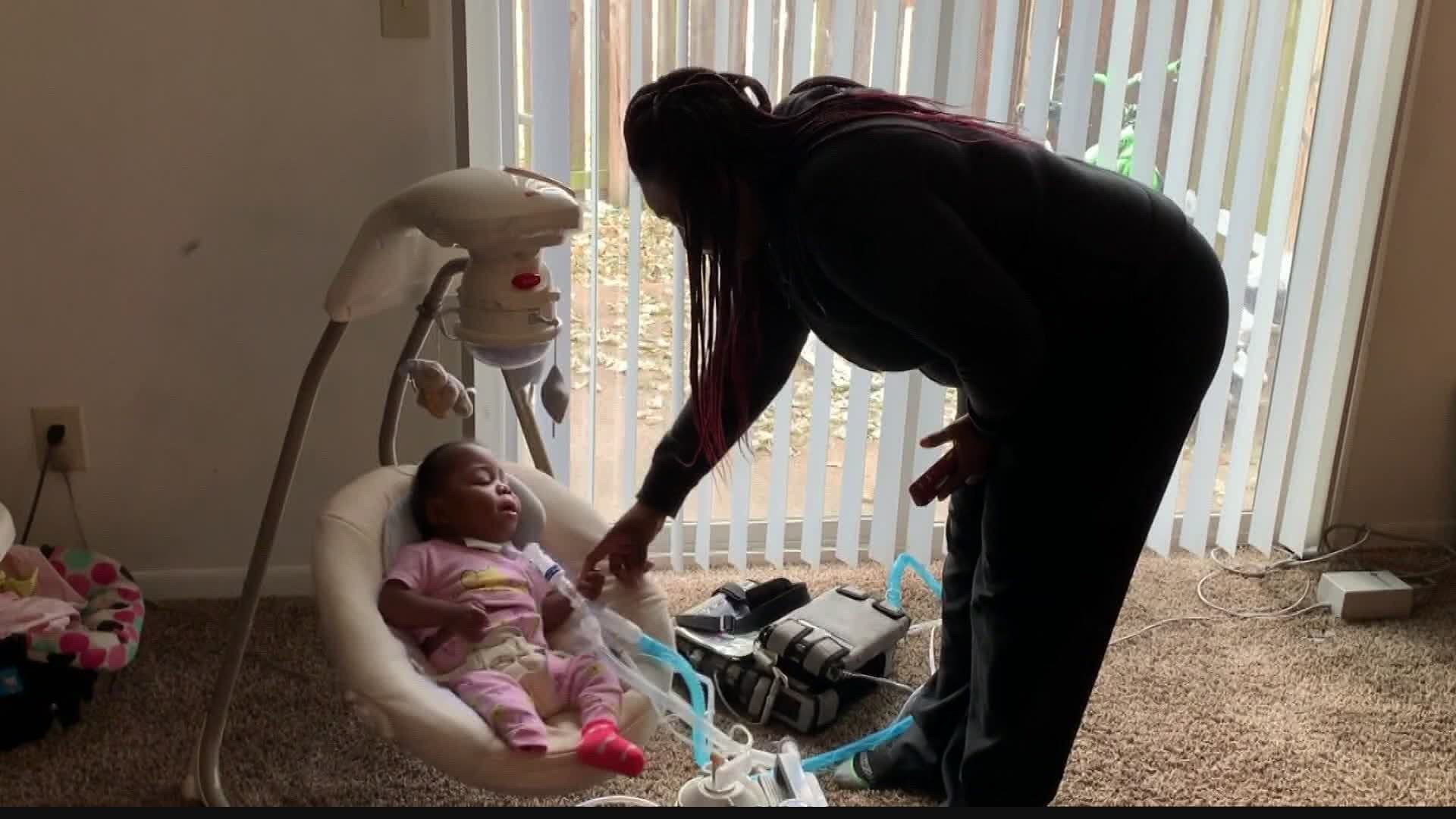 INDIANAPOLIS — The 2-page typewritten letter that was sent last week to Indiana Governor Eric Holcomb was both professional and respectful. But behind the 617 carefully chosen words emailed to the governor, there is a growing urgency and impatience with state leaders who have failed to meet the daily needs of Indiana’s most medically-fragile residents.

“We’re at a really critical point, so we hope he’ll listen,” said Evan Reinhardt, the executive director of the Indiana Association for Home and Hospice Care (IAHHC). “We want individuals to be able to live out their days where they prefer, not where they’re forced to go because of a lack of options.”

A lack of options is exactly what thousands of elderly and disabled Hoosiers are facing because of a chronic shortage of home nursing care that has reached crisis levels. That crisis is what prompted Indiana’s home health care industry to write a personal appeal to the governor. The question is: how will the governor respond? Or will he respond at all?

For months, 13News has been documenting Indiana’s home nursing crisis. WTHR’s Gasping for Care investigation revealed thousands of Hoosiers with disabilities cannot get the home nursing care that the state has already approved and paid for because there are not enough nurses to provide the care.

Home nursing agencies say the shortage of home nurses and home health aides is largely caused by low reimbursement rates. Those rates, which are set by state leaders, leave home health care agencies at a significant disadvantage as they compete with nursing homes and hospitals to hire and retain qualified nurses. Home health nurses in Indiana have not received a significant increase in their Medicaid pre-approved rate in nearly a decade, forcing many nurses to find higher-paying jobs — often leaving the health care industry all together.

Families across Indiana feel the impact of the low rates as they wait on long waiting lists for a home health nurse. 13News has reported cases in which families with chronically-ill and disabled children have waited weeks, months, even years to get the level of home nursing care approved by state agencies. Parents unable to secure home nursing care are forced to quit their jobs so they can care for their special needs child themselves. Several patients have died due to the lack of accessible home nursing care, according to a dire letter that a pediatric doctor sent to state leaders.

The shortage has also forced some families to send a loved one to a nursing home. Jeni Hathaway made that decision in 2019 after she spent several years unable to find home nursing care for her daughter, Cheyanne, who needed a respirator to breathe. The 23-year-old Frankfort resident died in the nursing home less a year later. According to Hathaway, the nursing home staff did not understand how to maintain Cheyanne’s oxygen levels.

“Trapped” in a nursing home

Across the state, other Hoosiers say they are stuck in nursing homes where they do not need to be.

“There is no medical necessity for me being in this nursing home,” said Jim Aegerter, speaking to 13News from inside his room in a Greenwood nursing home. “Basically, I'm just taking up space and it's costing a whole lot of money.”

Aegerter was born with cerebral palsy. He needs help to get in and out of bed, to get dressed and to use the restroom. For years — before the home nursing shortage — he was able to do all those things at home with the help of a nurse.

“Once I'm in my powered wheelchair, I can pretty much do anything I need to,” he said.

But now, because Aegerter cannot find the nursing care he needs to live in a home or community-based setting, he is unable to maintain his independence. Rather than paying for a nurse or home health aide to assist Aegerter several hours a day, Medicaid is paying for him to live in a nursing home, which is a more expensive option. For Aegerter, a lack of home nurses means a lack of choice. He says he would much prefer to be living at home rather than in a long-term care facility, where he said he feels “trapped.”

“That's a no-brainer,” he said. “I can do more for myself in the community versus here.”

Who’s getting the money

Despite an acknowledgement by state leaders that Hoosiers prefer to remain in their homes as they age, Indiana spends the vast majority of its long-term care dollars on nursing homes — not on home nursing.

In fact, during the pandemic, state leaders have given nursing homes millions of dollars in rate increases to boost nurse salaries and pay for more personal protective equipment, while home nursing agencies have gotten nothing.

Early in the pandemic, the Indiana State Department of Health and Indiana Family and Social Services Administration announced they would give a 50% rate increase to nursing homes that became COVID-19 dedicated facilities. According to the state agencies, “these rates will allow facilities to increase staff salaries and to pay for transportation of residents if needed and for increased cleaning and PPE costs, in addition to other costs incurred.”

At the same time, ISDH and FSSA announced a rate increase for every long-term care facility in the state. “Because the COVID-19 pandemic has affected all LTCFs, we will increase current rates by 4.2% independent of whether they are dedicated COVID-19 facilities,” said a guidance report issued by the agencies on April 8.

And nursing homes that followed state COVID-19 preparedness rules were also granted an additional 2% rate increase, as well as a $115 daily bonus to care for each resident who tested positive for COVID-19.

Since the start of the pandemic, ISDH and FSSA have provided no additional rate increases for home nursing care. The extra money offered to nursing homes to increase staff salaries, pay for personal protective equipment and cover other COVID-related costs has not been extended to the home care industry.

“The only group that's received an increase are nursing homes at this point,” said Reinhardt, whose organization represents more than 200 agencies that provide home based nursing care. “We do think it’s short-sighted to only have an increase for that group.”

“You can't just pick one winner or loser in an industry,” agreed Nikhil Gunale, business development executive at Acme Health Services, which provides home nursing care to about 100 clients in central Indiana. “You have to spread the money evenly where it's most effective. We know people prefer to live in their own home and living in an institutional setting has huge drawbacks. When you can’t leave your room in a nursing home, how is that a comfortable environment?”

Gunale says his agency has also faced increased costs for PPE and other safety equipment due to the pandemic, while also facing a dramatic decrease in nursing staff. Low reimbursement rates, which caused hiring challenges before COVID-19, have made hiring home nurses during the pandemic almost impossible.

“I feel like the system has almost stopped. The number of applicants coming in or even contacting us has just fallen off a cliff,” Gunale told 13News.

“Patients are dying because we don't have the appropriate level of care for them,” said Leslie Deitchman, who operates Tendercare, one of the largest home health care agencies in the state.

“The health care system has forgotten that home care is the least expensive, most preferred form of care,” added David Totaro, an executive at Bayada Home Health Care. “If we had more folks that were able to be cared for at home rather than in nursing homes, we would have significantly reduced the number of fatalities across the country due to COVID-19.”

What they want the governor to do

Their concerns underscore the reasons Indiana’s home health care association sent a personal plea to the governor. The letter asks Holcomb to dedicate some of Indiana's $2.6 billion in federal CARES Act funding to increase reimbursement rates for home nursing “in order to stabilize the industry during this unprecedented time.”

Other states, such as North Carolina, Arkansas and Massachusetts, have already done that. But Indiana, which is ranked by AARP as one of the worst states in the nation for spending on home and community-based health care, has not followed suit.

“At the time of this writing, only Nursing Homes have received any additional financial support from the state. We encourage FSSA to be given authority to take additional measures to support all of Home and Community-Based Services (HCBS), and Home Health specifically,” Reinhardt wrote in his letter to the governor. “Because of the COVID-19 pandemic, providers are spending more money than ever to protect our patients and staff, yet we receive the same reimbursement in place prior to the emergency declaration.”

In January, just weeks after 13News broadcast the Gasping for Care investigation, FSSA announced it would pay higher reimbursement rates for some types of in-home nursing care in Indiana. But that rate increase falls far short of the sweeping rate reforms needed to impact the state’s home nursing crisis, especially during a pandemic.

The significant increase that took effect Feb. 1 applies only to Indiana’s Aged & Disabled and Traumatic Brain Injury Medicaid waiver programs. It impacts in-home respite care — the kind of home nursing that allows family members caring for a loved one to go out to dinner — schedule a personal doctor's appointment or attend a friend's wedding while a nurse takes on their caregiver responsibilities.

The vast majority of home nursing provided in Indiana does not fall under the category of respite care.

Most of Indiana’s home nursing care is instead provided through the state’s Medicaid prior-authorization (Med P.A.) program, which provides daily nursing that's crucial for sick and disabled Hoosiers to stay in their homes. Med P.A. covers the kind of nursing that allows family caregivers to go to their jobs each day and to get a good night's sleep in the evening while a home nurse cares for their loved one who needs round-the-clock care. The rates for that type of home nursing did NOT increase.

IAHHC is now seeking approximately $15 million in additional state funds to implement an across-the-board rate increase, even though the governor and his administration have been reluctant to commit more funding for home nursing care.

13News contacted the governor’s office to get reaction to the letter sent by IAHHC. The reaction came in the form of a very short statement.

“The letter is being reviewed,” said Rachel Hoffmeyer, the governor’s press secretary.

Aegerter, who was appointed last year by Holcomb to the Governor’s Council for People with Disabilities, hopes the governor will show interest in addressing the state’s home nursing crisis.

“I think he should roll his sleeves up and come in and see me,” Aegerter said from his nursing home bed. “Or he can call me. Just call. If he truly wants to find out people’s opinion, he needs to be accessible to people who don’t have access to him.”