Indiana's former state fire marshal, who's fighting Parkinson's Disease, is urging all Hoosiers to install a photoelectric smoke alarm in their homes. Find out why here. 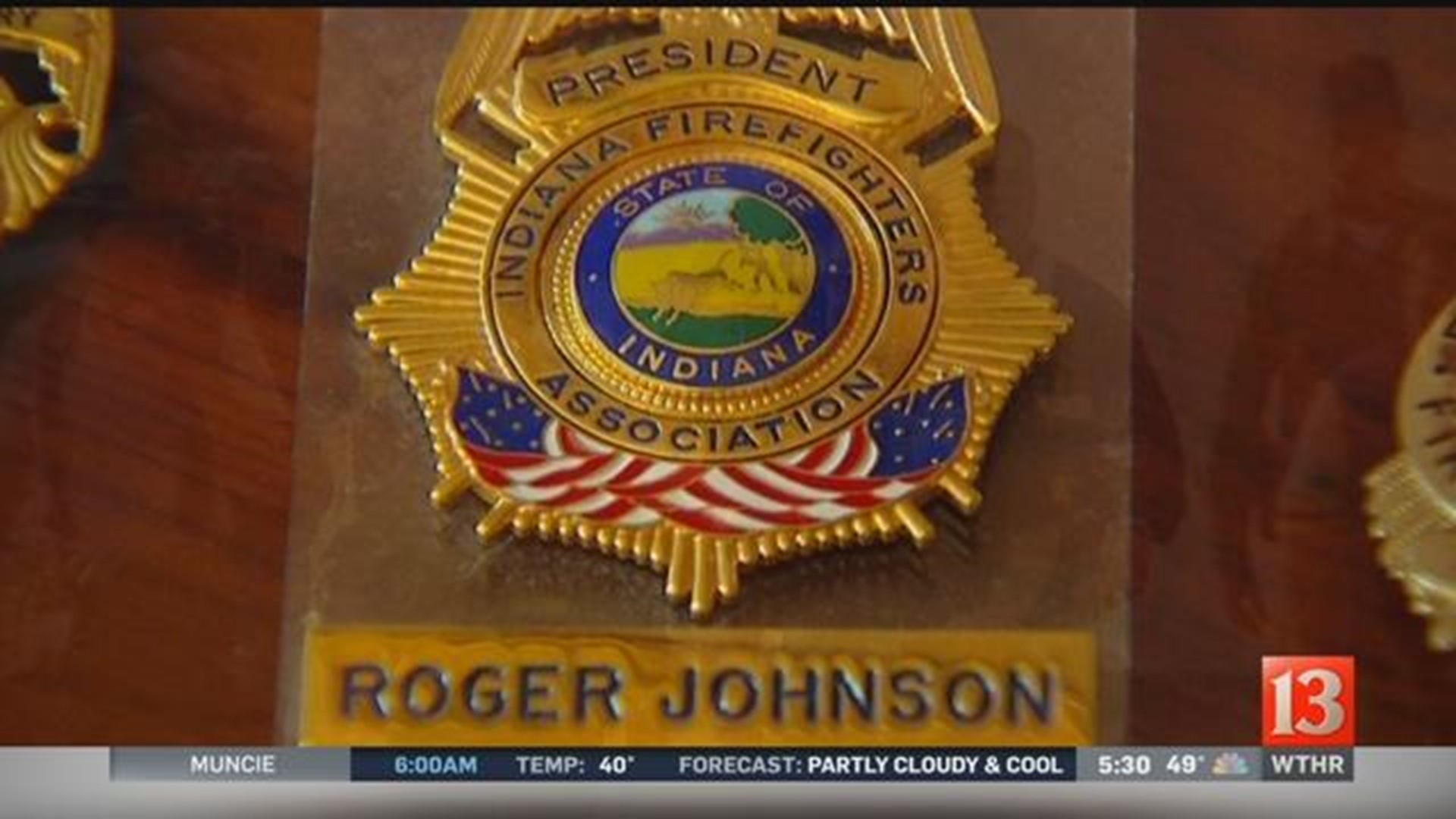 If a picture is worth 1,000 words, Roger Johnson's stacks of photos read like a novel.

They trace Johnson’s early days as a volunteer firefighter in the 1960s, his appointment as East Columbus Fire Chief in 1974, and his rise to Indiana’s top firefighting post in 2005.

"I loved every minute of it," Johnson told WTHR. "It was a real honor to serve as state fire marshal."

Nowadays, Johnson’s fire marshal badge sits on a coffee table. His firefighting gear lies on the floor of his Columbus home.

"I was diagnosed three years ago. I have a heck of time walking -- let alone getting around -- but I don't like to cry about my own problems, so I take the challenges of life as they come," he said.

Johnson admits looking back at some of his pictures is hard -- reminders of things he can no longer do, like fishing for salmon in Alaska’s Kenai Peninsula. And then there are the haunting pictures that still live in his mind: images of children who burned to death as he visited fire scenes across Indiana.

"Still have trouble talking about it," Johnson said, biting his lower lip and pausing to fight back tears. "That's why I feel like it's still my job -- if I still have some energy left -- to keep doing what I'm doing."

What Johnson is now doing in his retirement is writing a letter -- a letter written specifically for you and your family. It's something he's wanted to do for eight years, since he first saw an Eyewitness News investigation that took him by surprise.

"That really opened my eyes and I’ve never wanted to stop beating the drum since then," he said.

In 2007, 13 Investigates began an ambitious project to test different types of smoke detectors, leading WTHR to expose a deadly delay in millions of those alarms. With the help of the Indianapolis Fire Department, Eyewitness News revealed ionization smoke alarms -- the most popular kind of alarm and the type you probably have in your home right now -- responded much more slowly than photoelectric smoke detectors during a slow, smoky fire.

During the IFD testing, the photoelectric alarm sounded in 16 minutes, but the ionization alarm did not activate for 42 minutes -- well after the room was filled with thick choking smoke and dangerously-high levels of carbon monoxide gas.

At the time, state fire marshal Johnson didn't know about the difference in smoke alarms, and most other firefighters in Indiana didn't know either. The fire marshal called for a more thorough investigation, prompting his office and several central Indiana fire departments to conduct their own tests to see the problem with their own eyes.

"When you have to take a smoke alarm detector off and physically put it in fire to get it to go off, something’s wrong. My gut instinct tells me if there had been a family in there, they would have died," said Wayne Township fire chief Ron Cranfill after the test.

"Right now we have an emergency on our hands. The problem is throughout Indiana, throughout the nation, people have this false sense of security right now with smoke detectors," he said in 2007. "We have to sound our alarms."

Johnson did sound the alarm, sending out a bulletin and meeting with fire departments across the state. But since his retirement, he fears the message about photoelectric smoke alarms has been lost.

That's why he is writing a message now -- a letter he wants delivered directly to you.

It is titled "A report on correct smoke detectors in your home," and Johnson says he weighed every word carefully.

"There are two types of smoke alarms available, Ionization or Photoelectric.  Ionization alarms do not usually sound a warning during early stages of a smoldering type fire in time for you to escape … PHOTOELECTRIC SMOKE DETECTORS WILL ALERT YOU IN TIME TO ESCAPE!" he wrote.

The one-page letter goes on to explain the how many fire fatalities can be prevented by choosing an alarm that can better warn a sleeping family of a slow-burning, smoldering fire.

Because of Parkinson's Disease. Johnson cannot write and type easily. Some days, talking is a big challenge, as well.

But Johnson is still speaking up to fix what he says is a dangerous problem in millions of homes.

"This is so easy to correct. Just install a photoelectric smoke detector near your sleeping area and you will have a much better chance to escape instead of playing a game of chance with an ionization smoke detector most likely will fail if a fire occurs," the letter reads.

Some battles in life you choose. Some you don't. Roger Johnson is fighting both at the same time.

"What else am I going to do? I can't fish anymore," Johnson said. "I love the idea of helping other people. If I can help get a message out that's going to save somebody's life, then I'm doing the right thing."