The reports of what state investigators discovered inside a Tipton funeral home have local families telling 13 Investigates they are shocked and hurt. 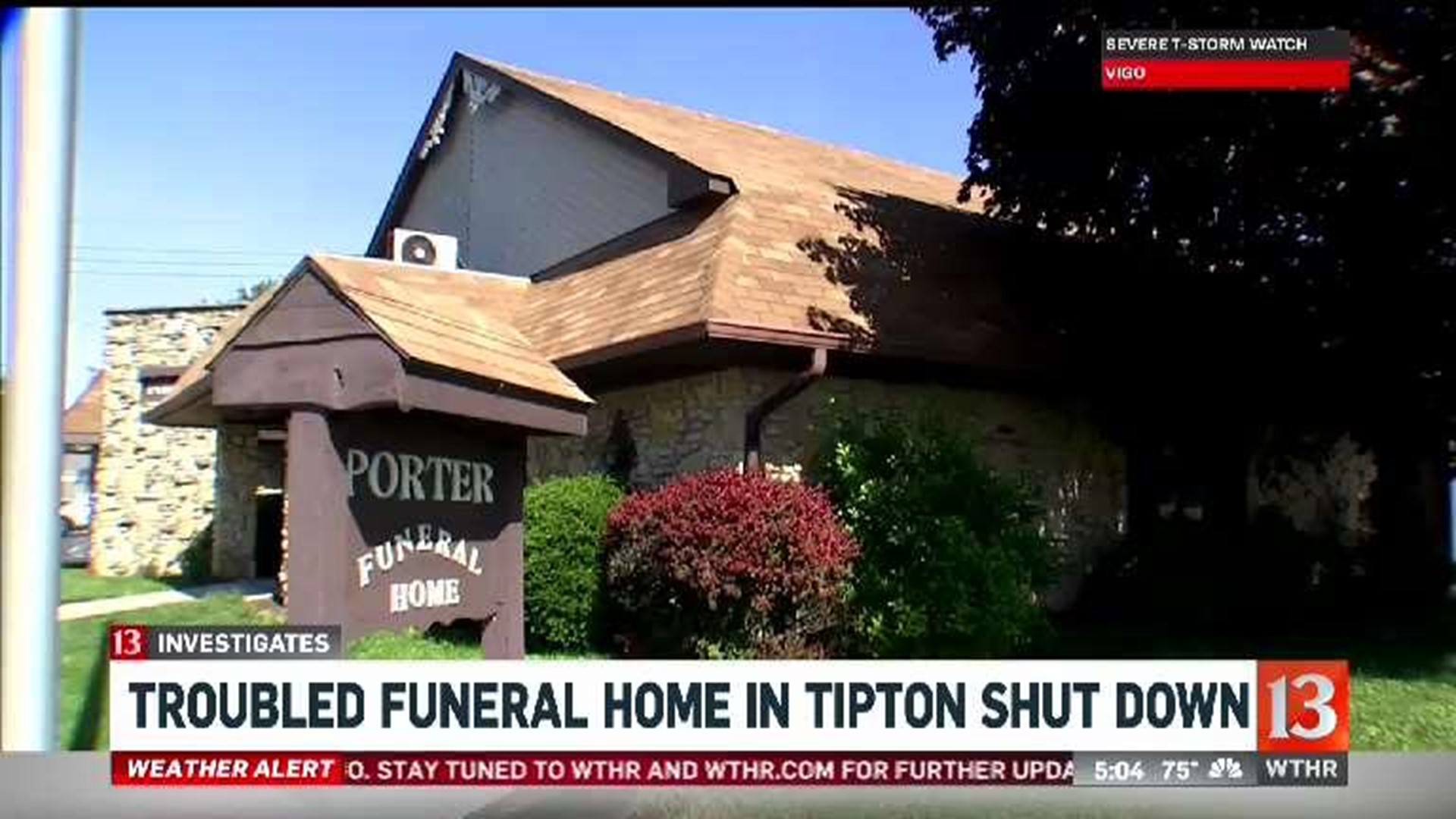 The reports of what state investigators discovered inside a Tipton funeral home have local families telling 13 Investigates they are shocked and hurt.

"I'm having a hard time grieving as it is, and then when I got the news of this, it's like I let my dad down," said Ashly Nance. "We didn't get to protect him like he's always protected us."

Nance learned her father's body is one of four not cremated and instead stored at Porter Funeral Home without refrigeration. State inspectors say at least one of those bodies remained at the funeral home for three weeks before it was removed Thursday when Indiana State Police searched the facility.

State Police are investigating whether funeral director Kevin Porter failed to properly bury at least four bodies, as required by Indiana law. Also Thursday, the Attorney General's office requested an emergency hearing of the state licensing board to suspend the Tipton funeral director's license and the license of Porter Funeral Home.

Porter killed himself Thursday, just hours after Indiana State Police obtained a search warrant for the facility. It is unclear how his death will impact the investigation.

State law requires disposition of a body to take place in a "reasonable" amount of time and considers any violation a misdemeanor.

Inspectors determined the funeral home failed to issue death certificates for at least 11 people who died between April 2 and June 10 of this year. A memo from the Tipton County Health Department this week details what happened to those bodies. It says the remains of four people were still in the funeral home. Four others were awaiting cremation at a facility in Huntington, Indiana. Two more were buried without death certificates, and one person was cremated and the remains released to the family without a death certificate, according to the memo.

Inspectors from the State Board of Funeral & Cemetery Service commented that the "facility was in a state of disarray, noting clutter and disorganized file and paperwork," according to a petition filed with the licensing board.

Friday, the funeral home parking lot was empty and the door was locked.

Five days after the inspection, the Attorney General's office took action against Porter and the funeral home, requesting an emergency hearing to suspend their licenses.

In that petition, state officials wrote, they "present a clear and immediate danger to the public health safety and/or property" if they are allowed to continue to operate.

The petition for suspension says Porter's funeral director license expired December 31, but he was still performing those duties and was the only person at the facility when inspectors visited June 14. A funeral director must have a valid license to apply for a death certificate, so without that, Porter could not access the state's online system for completing death certificates.

13 Investigates has learned the Tipton County Health Department first raised concerns to the state in April after hearing from Porter Funeral Home customers who were having trouble getting death certificates for their recently deceased loved ones. WTHR has also learned at least three families have now filed complaints with the state on their own.

The license for the funeral home itself was valid at the time of the inspection.

Porter Funeral Home also failed its last inspection in July 2018. At that time, inspectors noted that the funeral director's license, the funeral home's license and the COA displayed on the wall were all expired. They also found files not available for inspection as required as well as contracts with customers that were not properly signed.

Ashly Nance and her sister, Amber Stout, say they thought their father had already been cremated. Duane Nance died of cancer June 7. Instead, they say they believe their dad was "left to rot."

"Who would ever dream something like this would happen?" Stout said.

The sisters say they wish Porter had told them he could not legally issue a death certificate, so they could have gone elsewhere.

Stout and Nance say they are relieved the bodies recovered from the funeral home are now being handled properly.

"Thank God that somebody went in there and found him, because if not, we may have never had our dad's ashes," Stout told Eyewitness News. "We just want to make sure what he wanted to happen happens."

The bodies removed from the funeral home Thursday are now at the Hamilton County Coroner's office.

The two other funeral homes in Tipton have offered their services including filing death certificates so that bodies can be cremated. One of those funeral homes is operated by the county coroner, Brad Nichols.

Nichols says both funeral homes were busy meeting with the families all day Friday.

There are at least eight bodies still waiting to be cremated. Nichols says he believes all the death certificates will be filed and cremations completed some time next week.