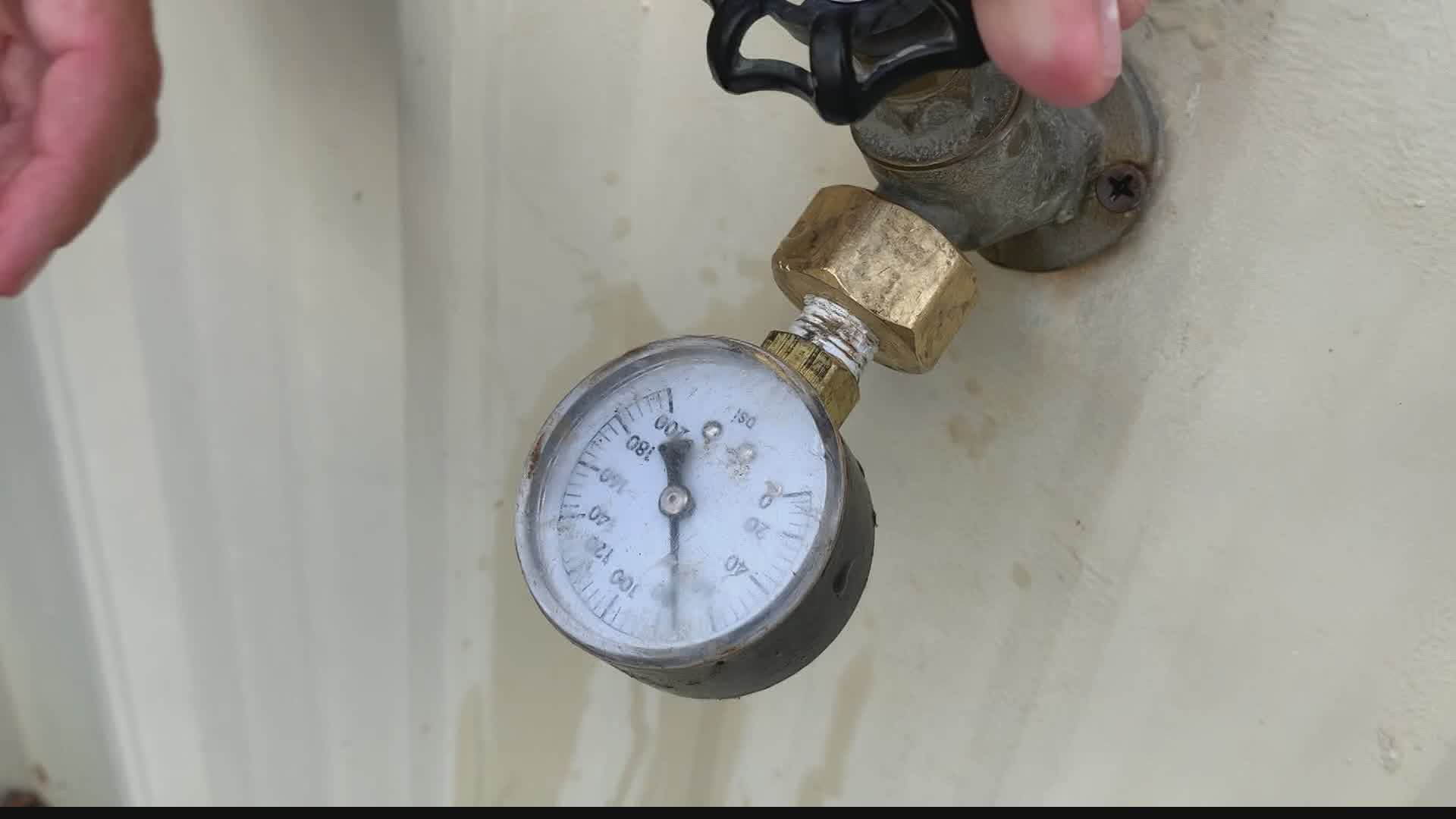 FISHERS, Ind. — Todd Ash remembers exactly how he spent Memorial Day, and it wasn’t nearly as relaxing as he had hoped.

“There it is,” he said, pointing to the water heater he installed on the holiday. “That’s actually the third one. We’re on our third water heater in about three and a half years.”

As Ash walked outside to discuss his water heater problems with 13News, his neighbors noticed a brightly-marked WTHR vehicle parked on the street outside his home. They wandered over to share their troubles, too.

“I’m on my fourth water heater,” said Mike Mehling, who serves on the board of the neighborhood homeowner’s association.

The same thing happened to Jan Gray, who lives a few doors down from Ash and Noble. “I had to have my whole kitchen floor replaced — close to $3,000 — and my water heater was only three years old,” she said. “Around here, everybody's got a story.”

She’s right. Neighbors in the Eller Run subdivision in Fishers tell the same, sad tale. Few residents knew what was causing so many busted water heaters until Ash purchased a $10 tool at a local hardware store.

After replacing his third water heater since December 2016, Ash bought a water pressure gauge to see if his home suffered from high water pressure. The gauge showed his suspicion was accurate — all over the neighborhood.

The water pressure in Jan Gray’s home was 100 pounds per square inch (PSI). Ash’s water pressure was 100 PSI — the same as he discovered at Bruce Blomberg’s house across the street. A water pressure gauge showed Matthew Noble’s reading at 120.

Those levels, according to plumbers and home inspectors, are much too high.

Where water pressure should be

“120? Yeah, that’s a lot. It’s extremely high,” said Kelson Carter, a third-generation plumber whose family owns Greenwood-based Carter’s My Plumber. He told 13News the water pressure impacting pipes in the Eller Run subdivision can cause significant stress and damage to appliances and plumbing.

“I like to see it between 50 and 70 PSI,” Kelson said. “Anything in excess of 80 PSI per plumbing code is considered high water pressure.”

Indiana’s plumbing code requires homes that have water pressure readings over 80 PSI be equipped with a pressure reducing valve to prevent damage.

But with water pressure well above 100 PSI, many Fishers residents who live in the Eller Run neighborhood have readings that are 30% to 50% above the upper limit of the state plumbing code.

“Over 100 [PSI] would definitely be too high with copper pipes,” said longtime Indiana home inspector Steve Ambro, president of AP Inspections. “Eventually, water pressure that high could easily blow out a joint. You don’t want it that high.” He recommends residential water pressure levels no greater than 90 PSI.

Ash and his neighbors were alarmed to discover the problem.

“I really didn’t know what to expect and, at first, I didn’t know what the readings would mean. Then I started doing some research, and pretty quickly it became apparent it was much higher than I’d be comfortable with,” Ash said.

The next step for Eller Run residents was to call their water utility company. They did not like what they heard.

RELATED: 13 Investigates: Look where she found her stolen cellphone!

“It really isn’t our problem”

After discovering his water pressure was well above state plumbing code, Ash figured Citizens Energy Group — the company that provides water service to his entire neighborhood — would send a representative to his house to investigate and to help fix the issue.

“I called and explained what I had found and what my reading was, and they told me ‘It really isn’t our problem,’” Ash told 13News. “They said it was my responsibility and that I had to fix it at my expense. They said that was the only option.”

13 Investigates also contacted the utility company and got the same response.

“While Citizens distributes the water through Citizens-owned infrastructure, customers own the water lines in their yards and their plumbing and appliances. Therefore, if a customer is experiencing higher water pressure in their home, it is their responsibility to install pressure reducing valves (PRVs) to regulate the water pressure to their desired level,” wrote communications coordinator Laura O’Brien.

She also helped explain why the company is providing the Fishers neighborhood with water pressure that is much higher than recommended.

“The Eller Run neighborhood is served by our White River North Plant, located about 2 miles away. This plant serves an area of the North side of Marion County and parts of Fishers. In order for the water to reach customers farther from the plant, the water pressure in neighborhoods closer to the plant runs higher,” O’Brien explained. “Citizens does not regulate water pressure for particular subdivisions but instead establishes pressures for areas of its system to ensure residential and commercial service and fire protection.”

“Our first responsibility across our water system is to ensure a minimum water pressure of 30 pounds per square inch… It’s in our terms and conditions with the state that we must provide that minimum to ensure enough water pressure for fire protection service,” Considine explained.

“To my knowledge, there is no maximum-allowed pressure for water distribution systems,” IURC deputy communications director Stephanie Hodgin wrote in response to 13News’ questions.

That is troubling news to residents in the Eller Run subdivision, where the water pressure flowing into homes is much higher than allowed by the state’s plumbing code.

“It's almost like a ticking time bomb,” Ash said. “It just doesn’t feel quite right that that is the way it should be. It feels that eventually something is bound to happen.”

And it has been happening.

Jim Hennke, a Navy veteran and retired electrical engineer, showed 13News the cement floor of his basement, pointing to an area recently flooded by a broken pipe.

“All the water was pouring down here,” Hennke said, then pointing upward to the water pipe visible overhead. “It’s a hot water pipe going to the bathtub. That’s the one that sprung a leak. The high pressure has the capability of weakening those solder joints.”

Credit: WTHR
Jim Hennke looks at a pipe that leaked in his basement. He says the leak was caused by his home’s high water pressure.

His wife discovered the problem a few weeks ago as she was working in the family’s basement. Because the leaking pipe was discovered quickly, Hennke says he was lucky to lose only $1,000 in carpeting that he was forced to throw out. But the experience left him shaken — especially after he discovered his neighbors have been having their own problems caused by high water pressure.

“I was having a hard time sleeping at night, thinking: when’s the next solder fitting going to fail under this pressure?” he told 13News. “I thought, ‘This is something other neighbors may want to hear about.’”

Ash made sure his neighbors did hear about the problems, offering his water pressure gauge to those who wanted to test their pressure.

“I was surprised, too” added Blomberg, as he learned his water pressure reading is 110 PSI. “Nobody wants to have a water leak in their home, and they always seem to happen at the worst time, like when you’re not around.”

Todd and his neighbors think Citizens Energy Group should take responsibility for their troubles, and they’d like the utility company to install a water pressure regulator on the water main coming into the neighborhood.

Citizens says that is not possible.

“Number one, it's not practical from an engineering standpoint, and it's very expensive, so those are the primary reasons we can't do that,” Considine told 13 Investigates. He said a 12-inch water main that provides water to the Eller Run subdivision is the same pipe that distributes water to other neighborhoods further away, so placing a water pressure regulator on the water main would have too big an impact on other customers.

Discouraged, Eller Run residents have decided it is time to take matters into their own hands. Ash and Hennke have already installed water pressure regulators to reduce the amount of water pressure in their pipes, fixtures and appliances. Several of their neighbors have already reached out to a plumber and plan to have a regulator installed in the coming weeks.

Most homeowners will call on a plumber to install a water pressure regulator. The job usually costs between $300 and $600. But the part costs around $55 at local hardware stores and can be installed by a competent do-it-yourselfer, according to Carter.

Credit: WTHR
A water pressure regulator costs around $50, but installation by a licensed plumber will cost several hundred dollars.

“There is workmanship involved, and that’s why we recommend a licensed plumber. But the parts are very accessible. You can buy them at a box store,” the plumber said. “If you’re going to do it yourself, you just need to make sure you have the home water supply off to your home and you’d install it right where [the water supply pipe] comes through to your basement or crawl space.”

Mehling purchased a different device to help reduce the impact of high water pressure. He now has a thermal expansion tank installed on top of his water heater. It allows heated water to expand into the additional tank, alleviating the additional stress of high water pressure inside a water heater. Plumbers contacted by 13News say that is a job probably left to a licensed professional, not a causal do-it-yourselfer.

How many homes are impacted by high water pressure? Plumbers tell 13News it affects more homes than you might think.

“That’s really my concern at this point, it’s for all the neighbors,” Ash said. “How many other people are affected by this and don’t even know it?”

The bottom line: knowing your home’s water pressure is important, and a $10 tool can help you figure out whether your pipes could be facing lots of extra stress that puts them at risk of failure. If you want to learn more about how to use a water pressure gauge and the benefits of a water pressure regulator or thermal expansion tank, please watch this video.