Indiana's largest insurer, Anthem, is drastically cutting its reimbursement rates to providers. And that has Applied Behavioral Analysis centers and parents worried. 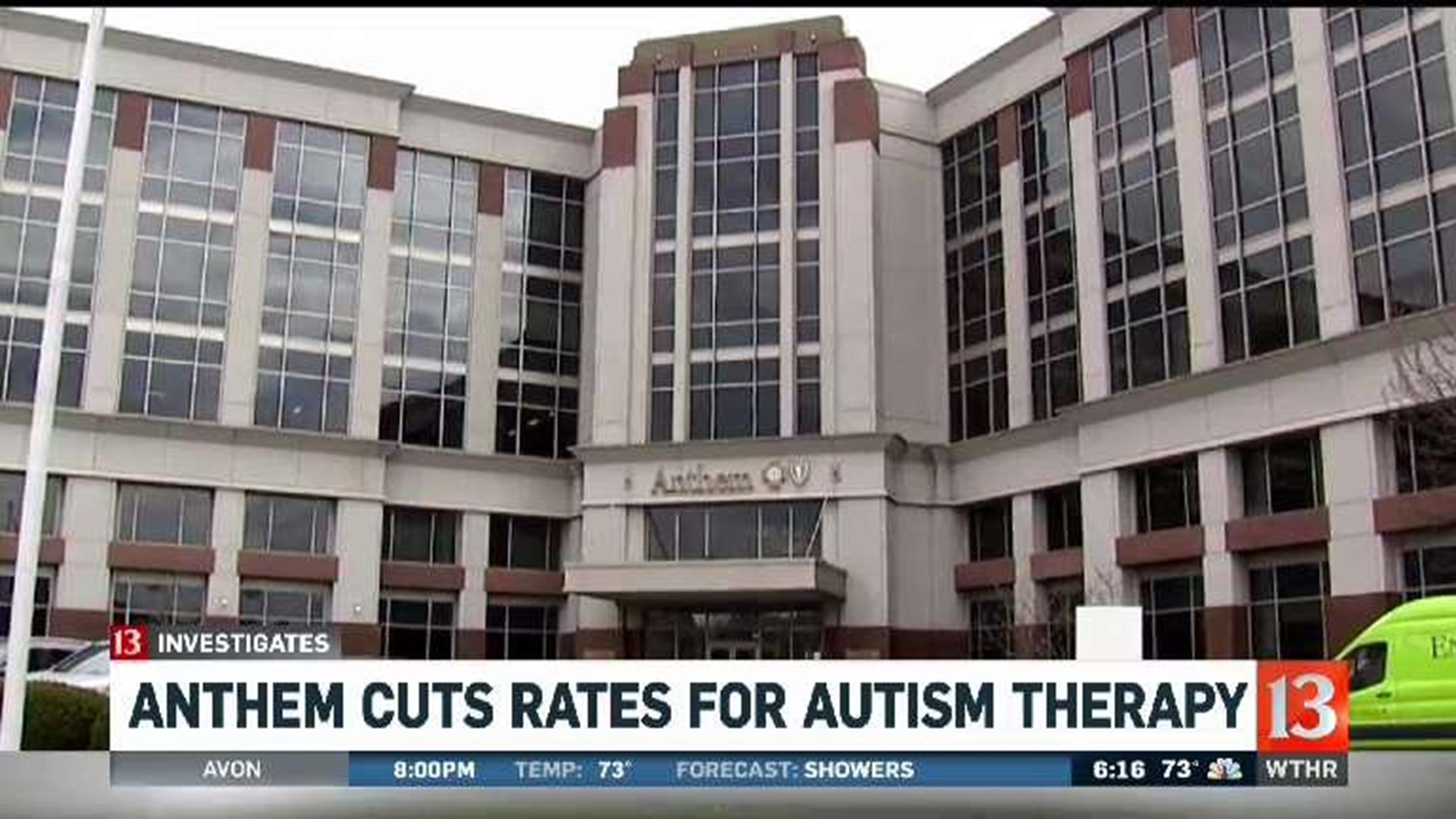 INDIANAPOLIS (WTHR) – Critical therapy for children with autism could soon be at risk.

Indiana's largest insurer, Anthem, is drastically cutting its reimbursement rates to providers. And that has Applied Behavioral Analysis centers and parents worried.

13 Investigates reveals why some directors say it could force centers to shut down.

The Applied Behavior Center for Autism in Indianapolis has rubber tires and play equipment to help the children build motor skills. (WTHR Photo)

Inside the Applied Behavior Center for Autism in Indianapolis, little feet bounce up and down on a large rubber tire. It's a fun workout to help the children build motor skills.

Down the hall, group therapy sessions to help improve communication and adaptive learning are also underway.

"They have to have those learning to learn skills and that's what ABA does," said Shelly Quinn, the center's director.

But on July 1, Anthem Insurance stopped paying the going rate for ABA. Instead, Indiana's largest insurer cut it's reimbursements. Some providers say by as much as 35%.

Anthem spokesman Tony Felts told 13 Investigates it's not fair to characterize the reduction as a 35% reimbursement cut, but the insurance company failed to provide any specific numbers.

"(Anthem) adjusted our fee schedule for applied behavioral analysis in order to mitigate revisions to the industry standard code [...] because those revisions could have the effect of increasing the cost of care," Felts said.

"It was a huge slap in the face," said Quinn who is also the mother of a severely autistic son.

She says it was her son Michael who ignited her passion more than 20 years ago to provide comprehensive therapy for children with autism.

Now she worries about the children who could suffer if it goes away. As for the letter Anthem sent to providers in May, Quinn said was not clear and left providers little time to prepare.

"They're worried. They're extremely worried," she said referring to the providers she has spoken with personally who are concerned about keeping ABA centers open and retaining highly trained staff.

"Different providers will probably be going out of business if in fact Anthem keeps this low rate," she told 13 Investigates, without naming the centers in jeopardy.

"We're really concerned about that. We do not have a surplus of ABA providers in our state," added Kim Dodson, the Executive Director of Arc of Indiana. That organization is an advocacy group that fought for Indiana's Insurance mandate for autism years ago.

Dodson told 13 Investigates it's time the Indiana Department of Insurance, state lawmakers and even the governor hold insurers accountable.

"When one provider does something (and) gets away with it, doesn't have any repercussions on it, yes other providers start to follow suit as well," Dodson said, explaining why Anthem's actions could spark other insurers to do the same thing.

Both Dodson and Quinn believe it's critical now to push for change due to a rise in the number of children diagnosed with autism.

"Four years ago they said 1 in 59 kids were born with Autism. Recently the new studies came out as 1 in 40," said Quinn.

Dodson said the numbers have bounced around a bit and uses the number "1 in 50 children" diagnosed every year.

"Any of those numbers are too great," she added. "We've got to figure this out."

While Anthem says it understands the concerns raised, parents are launching an online protest by sending letters to the CEO of Anthem through a site called Back to Blue.

The Arc of Indiana recommends the following steps to bring more attention to Anthem's payment cuts for ABA therapy:

"Our goal is to help ensure access to high quality, affordable healthcare. One of the ways to help achieve that goal is to routinely analyze and rebalance professional fee schedules for medical services. This evaluation includes competitive benchmarking, analysis of government reimbursement, consideration of changes in care delivery models and the impact of any rate changes may have on the consumers we serve.

We have adjusted our fee schedule for applied behavioral analysis in order to mitigate the effects of revisions to the industry standard code reporting guidelines for this type of service, because those revisions could have the effect of increasing the cost of care.

We value the relationship we have with the care providers in our network and understand their concern about these changes. As the cost of healthcare continues to rise at an unsustainable pace, we have a responsibility as a healthcare leader to help address the challenge of affordability facing Anthem consumers."