It's fall, and the time of year tree trimming crews work to remove dangerous trees and limbs from public right of ways. 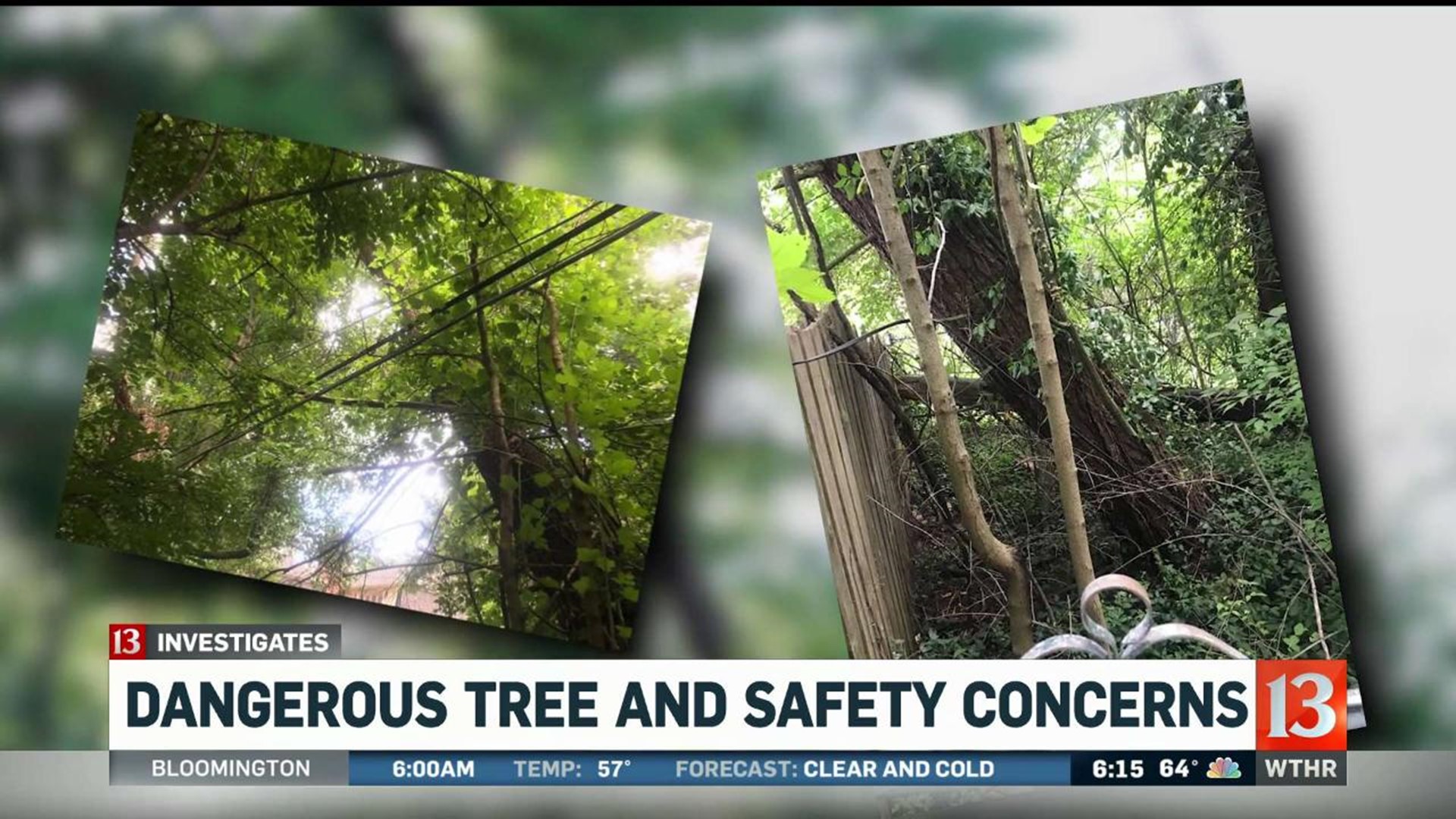 INDIANAPOLIS (WTHR) — It's fall, and the time of year tree trimming crews work to remove dangerous trees and limbs from public right of ways.

A leaning tree posed as a threat to Julie Walker's chickens if it had fallen. So she contacted 13 Investigates to get help getting it removed. (WTHR)

Just months ago, 13 Investigates showed you how a driver crashed his car after a dead tree literally fell into his path.

Now 13 Investigates is back with another neighborhood dilemma. This one involving a tree threatening property and a different brood of neighbors.

In "Mother Chicken's" neighborhood there's room for just about everything except a towering tree, leaning and looming near power lines. It's one collapse away from causing harm below.

"You can see it's like at an angle, so it would fall on his yard knocking his fence down," explained Julie Walker, the woman who proudly wears the name "Mother Chicken."

"Then obviously when it comes, there's the line and it will probably end up right here," Walker added pointing down to an area in her backyard. She's particularly concerned because it could hit the area where she built a coop for her hen Pearl and her entire brood.

"We have been trying to get this tree removed for some time," Walker said.

According to Walker, the property owner declined to take care of the failing tree.

When Walker saw our 13 Investigates report about falling trees causing dangerous accidents and even death, she reached out to share her neighborhood concerns and sent pictures showing the limbs in close proximity of the power lines.

"Have been pretty frustrated with the whole thing because we just did not want the tree to fall and we were worried about power lines being live and active after a storm because of a tree falling on them," she explained.

IPL routinely removes limbs and trees from public right of ways and even on personal property if the tree or vegetation poses a risk to power lines.

Based on what inspectors saw, IPL decided it was time to take action.

"It appears the tree has been like that for a number of years. It is in our best interest to remove the tree. If it were to fail it would likely take out the power line," IPL Community Relations Manager, Brianna Saunders, wrote.

For more than a month, the "other Chicken" waited to see if the problem would get resolved.

And then just days ago and in a matter of hours, IPL's tree trimming crew "cut down" years of worry over the safety of Pearl and her neighbors.

"We're pretty happy because it's been awhile," said Walker as crews worked behind her. "We really appreciate (WTHR) for coming out here and finally getting this process done for us. Thank you so much!" she said with relief.

IPL will only handle dangerous trees that could impact power lines. If you know of such a tree you can reach out to IPL directly.

Since the tree in Walker's neighborhood was on private property, the utility sent permits to three neighboring property owners to get access to the tree in question.

In most cases the homeowner is responsible for their own tree. If a neighbor’s tree falls and harms your property, you will likely have to file an insurance claim to cover damages. But you can seek legal action to recoup your losses.