13 Investigates has learned that just days before Bob Lamey announced his retirement, a complaint was made against him alleging he used the "N-word." 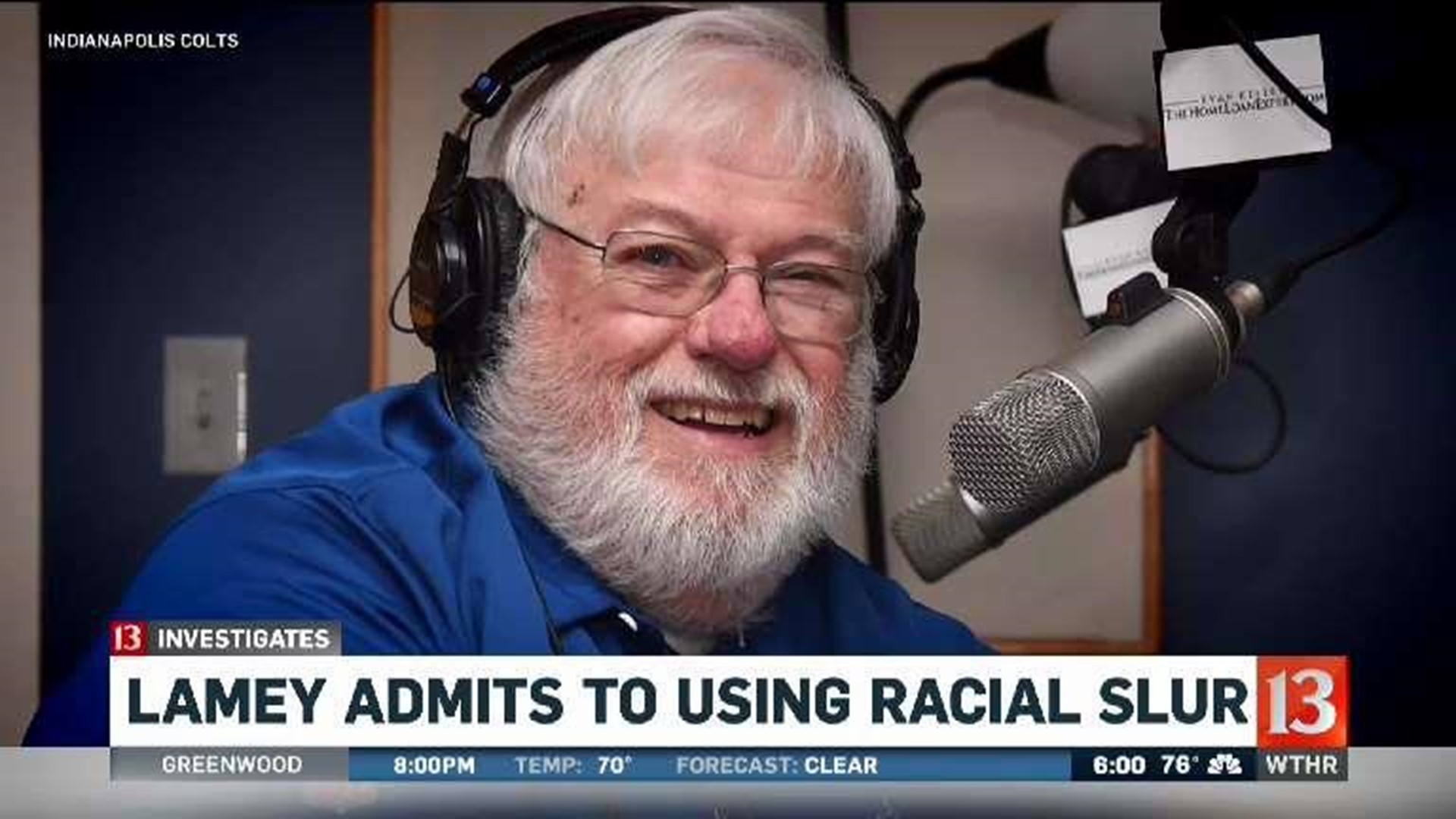 That information corroborates what WTHR was told by the radio employee who filed the complaint against Lamey. 13 Investigates learned that just days before Lamey announced his retirement, a complaint was made against him, alleging he used the "N-word." It was made by a radio employee, who claims she heard Lamey say the racial slur, was shocked, and had to speak up.

The Emmis Communications employee, who doesn't want her identity revealed, told 13 Investigates, "People don't know the whole truth." She went on to say, "No person you look up to uses that kind of hurtful language at all. It made me sick to my stomach."

The employee says Lamey used a racial slur off the air, in a conversation after a radio interview last Tuesday at Colts Camp. She says he was telling a story about when he worked at IMS, sharing what someone else said at the track. "He had asked me if the mics were off and I said, 'Yeah, I turned everything off. You're fine,'" the employee recalled. "Bob Lamey's describing this person saying he was asked in an interview, 'Do you think anyone's holding back their speed at IMS during quals? Do you think anyone's holding back?' And that person had replied 'there aren't any 'blank' in this race."

She says Lamey didn't say "blank" in retelling that story, and used a racial slur. "He said the 'N-word,' yeah. He thought it was OK to use that type of language at work. He was like, 'Oh I'm so so sorry. I'm so sorry if you're offended by this. I didn't mean to offend anyone' and I was like 'I'm black and I wouldn't ever say that word' and sort of just told him how it hurt me and how I don't think he should say it ever, even if he's telling a story," the radio employee said. "Then once he saw my face and realized he had messed up he had started really like profusely apologizing saying 'Please don't tell anybody.' When I left he said it again, 'Please don't tell anybody. Don't mention this to anyone'. I think he was apologizing so much because he knows it's wrong and he knows that people lose their jobs for that."

She shared that email with Eyewitness News. She says human resources then contacted the Colts, Lamey's employer.

Emmis Communications, in a statement to 13 Investigates, said "Emmis does not comment on personnel matters. Bob is a Colts employee. Emmis is committed to providing our employees a safe and respectful workplace."

"After they had talked to the Colts, they (human resources) reached out to me and said 'The Colts want more information. They want to know exactly what was said,'" the radio employee said.

Multiple sources tell Eyewitness News Lamey was approached by the Colts Saturday about the alleged incident.

On Sunday, they announced his retirement.

"Bob Lamey, the former Voice of the Colts, retired from the Indianapolis Colts on August 18 following a career that spanned over four decades. Bob was not fired by the Colts as some in the community have speculated. Bob has been in the sports broadcasting arena for almost 44 years and is 80 years old.

"It should be noted that Bob does want to acknowledge that while repeating a story while off-the-air last week to a friend at a local radio station, he used an inappropriate word that had been used in the story. Bob immediately apologized to the people involved for the comment and would hope that this error in judgment would not tarnish his long-held reputation in the sports community where he has been known as an accurate and passionate reporter.''

Eyewitness News reached out to the Colts for comment.

The radio employee stands by what she heard. She says when she saw Lamey didn't resign, but retired, when he wasn't reprimanded, but revered by the Colts on social media and in the news as an icon, legend and great representative of the city, she couldn't stay silent.

"He told me 'Don't tell anybody,' but he's celebrated either way. So that's hurtful. It's hurtful to hear he should be in the Ring of Honor. No one who says that word should be in any Ring of Honor," she said. "People need to know. If something like that happens, I feel like they should know."

First and foremost, the Colts deplore and do not tolerate the use of any racial slur----in any context. While it's our long standing policy to not make public comment on personnel matters, Bob publicly acknowledged that last week he repeated an inappropriate word when telling a story. He immediately apologized to the people who heard him use the word, and then promptly resigned.

Bob has a long and storied history in our community, but he made a serious mistake. We are deeply disappointed the incident took place and offer our sincerest regrets to all who were impacted by Bob's lapse in judgement.

Though later, the Colts sent a follow-up message, telling Kravitz they were the victims of autocorrect and meant to say Lamey retired, not resigned.

Just received this statement from the Colts regarding Bob Lamey: pic.twitter.com/Wj2LpKEDpX

There was disappointment expressed Wednesday about Lamey's actions among some athletes, fans and colleagues, including the hosts of the radio show Lamey was on, right before saying the n-word off-air.

Michael Grady of the "Grady and Big Joe Show" on 1070 The Fan said in part on the radio today, "Obviously, a lot of folks are waking up today and hearing the WTHR story on Bob Lamey. For what it's worth, I've always loved and respected Bob. But it's...you cannot do it. You cannot say it. Open mic, closed mic, behind closed doors private conversation whatever it may be."

When asked about the issue at Colts practice, Colts defensive tackle Al Woods said, "I mean people make mistakes. But it was wrong on all levels. You know, we're trying to break barriers. It takes all of us. And it does take all of us, so you know, everybody's held accountable. I know he's regretting what he said but hey, at the end of the day, it is what it is."

"I've known Bob my entire career and I've had a lot of great interactions with him," added Colts offensive lineman Anthony Castonzo. "But when you have the horseshoe on, you're a member of the Colts and you're held to that standard. So I understand what happened completely."