After a tip from a viewer, 13 Investigates uncovered problems at a Greenwood cemetery that are impacting hundreds of grave sites. 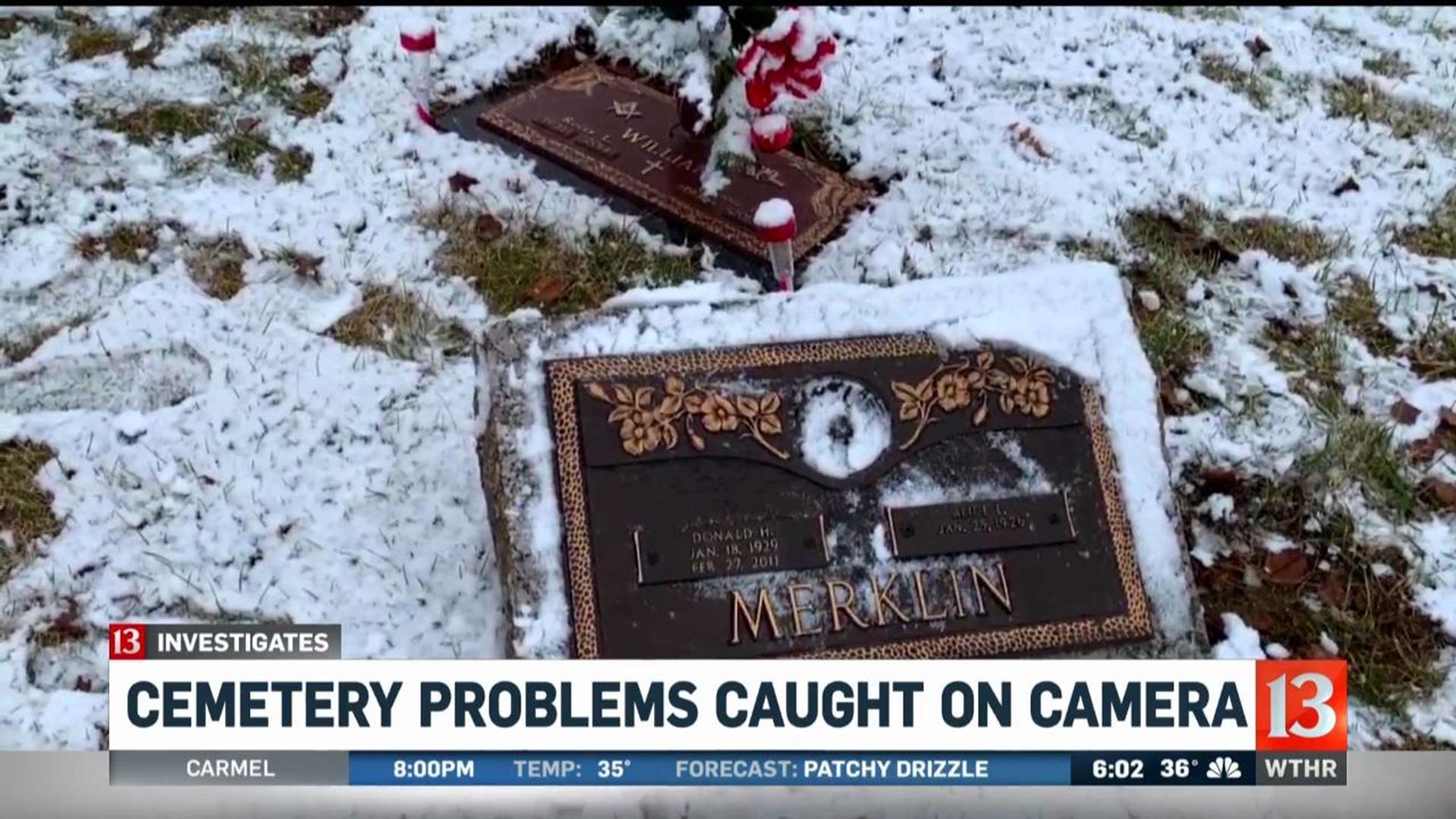 “If you look around, it's just a mess. It's unacceptable. Disrespectful,” said Stacey Bennett, who contacted 13 Investigates to raise concerns about cemetery practices that grieving families may find offensive.

Bennett and her husband, Terry, were surprised when they visited her parents’ graves in early December and noticed another gravestone sitting on top of the grave site.

She says she immediately contacted the cemetery to ask why another family’s gravestone was placed on the grave site of Roger and Bonnie Williams and was told it would be removed.

“It’s just a random headstone that’s been laying here. It doesn’t belong here and I have no idea where it’s supposed to be,” Bennett said. “Look around, they’re all over.”

All across the cemetery, 13 Investigates found other headstones mysteriously placed on grave sites where they don’t belong.

In some cases, those gravestones are touching other grave markers, with several monuments marking the same grave.

“It's just not right. Those markers in the wrong place. What happens when their families come out to find their loved ones and there’s no gravestone to mark the right spot?” asked Terry.

“Yeah, it doesn't make sense to me. I don't understand,” his wife added.

The Bennetts have also been busy watching grounds crews at the cemetery as they dig graves and transport dirt to fill them.

They are frustrated that some cemetery workers fail to protect Forest Lawn grave sites from damage caused by heavy equipment such as backhoes.

“They were guiding the [equipment] right over the top of the gravestones, and so many places where they drove over them are cracked right down the middle,” Stacey Bennett said.

She recorded video and took photographs in January that appear to show a cemetery employee driving a backhoe over Forest Lawn grave markers, leaving deep ruts on top of and alongside multiple graves.

13 Investigates also documented tire tracks across many sections of the cemetery, with some of those tracks leading directly over bronze and granite markers. Several of the headstones were warped or cracked.

“I just couldn’t believe what I was seeing,” Bennett said. “Why wouldn’t you do something to protect those gravestones?”

Drainage problems inside the cemetery have left other headstones sunken and covered in water or mud when it rains or snows – not the type of setting the Bennetts were hoping for when they laid Stacey's parents to rest.

Last week, Terry Bennett spent time on his hands and knees, wiping mud off of strangers’ headstones to reveal the names underneath and removing leaves from deep ruts left behind by grounds crews as they drove over Forest Lawn graves.

While the Bennetts were speaking with 13 Investigates at Forest Lawn, the cemetery’s general manager approached to ask if he could assist the family.

Shown the extra headstone sitting on the Williams' grave, he pledged immediate action.

“This is unacceptable. It shouldn’t be sitting here. Absolutely not. So I’ll get it moved today,” said Forest Lawn general manager D.W. Kelley. “When the grave is opened for a burial, the stone is removed and set over the side. So in this case, it should not be right on top of this family's space. It should have been set over to the side, so that can be easily rectified with my crew.”

Kelley, who started working at Forest Lawn a few months ago and who also has family members buried there, said when his grounds crews are digging and filling graves, they are supposed to lay down plywood to protect nearby grave sites from damage.

13 Investigates did see several areas where that appears to be happening, but Kelley admitted it’s not happening enough.

“It doesn't always happen where the boards are placed in there, so my goal going forward is to make sure on this property we board in on every grave to make sure the integrity is protected,” he told 13 Investigates, adding that it is especially difficult to protect grave markers at Forest Lawn because many of the graves are only 8-feet long -- not the standard 10-foot graves that are more common in newer cemeteries.

The Indiana Cemetery Association says cracked and broken stones should not be commonplace if cemetery staff take appropriate steps to protect graves.

“We do have to go into these cemetery sections to do our work, and backhoes are heavy,” said ICA executive director Casey Miller. “But we never encourage a cemetery to drive over an existing grave marker. For someone to blatantly drive over markers and to not pace down protection, that’s a big problem. That’s not an option. Protection is extremely necessary because we always need to care for the markers and the grass as much as possible.”

Miller said using wood or fiberglass boards to protect turf and memorials is especially important now because Indiana cemeteries have not yet experienced the frozen ground that usually helps groundskeepers during this time of year.

“When the ground freezes, it’s like driving on a hard rock surface, so when you take in a backhoe to do work, the ground is rock solid and you don’t leave ruts or damage the turf,” Miller said. “Frozen ground is our best friend from a maintenance standpoint, so a cemetery needs to be extra, extra cautious when there’s not frozen ground and we have the wet, soft conditions we’re seeing right now.”

The ICA executive director also took issue with the practice of storing headstones on nearby graves – even temporarily – rather than placing them back in their correct locations.

“In my opinion, to place that stone on someone else’s grave, that is disrespectful. Even in the winter when you might not be able to re-install a marker perfectly, you can place it back where it goes. Then in April or May, you finish the job. To put it on another grave, that’s problematic.”

The new general manager at Forest Lawn says he has not been pleased overall with the level of dignity offered to the individuals who are buried there.

To remedy that, he said he has changed mowing procedures, hired new grounds crew members and has plans to repair or replace broken grave markers throughout the cemetery.

“I’ve been here a couple of months and I’m meeting with every family that has a concern,” Kelley told 13 Investigates. “We’re getting it rectified immediately.”

That is good news for Stacey Bennett. The stray headstone that was sitting on her parents’ grave has already been moved. But as of today, other headstones are still sitting atop incorrect gravesites throughout the cemetery.

She still wonders what will happen to all of the other gravesites that haven't been cared for as they should be.

“I think it's really unacceptable. You just don’t treat the deceased like that,” she said.