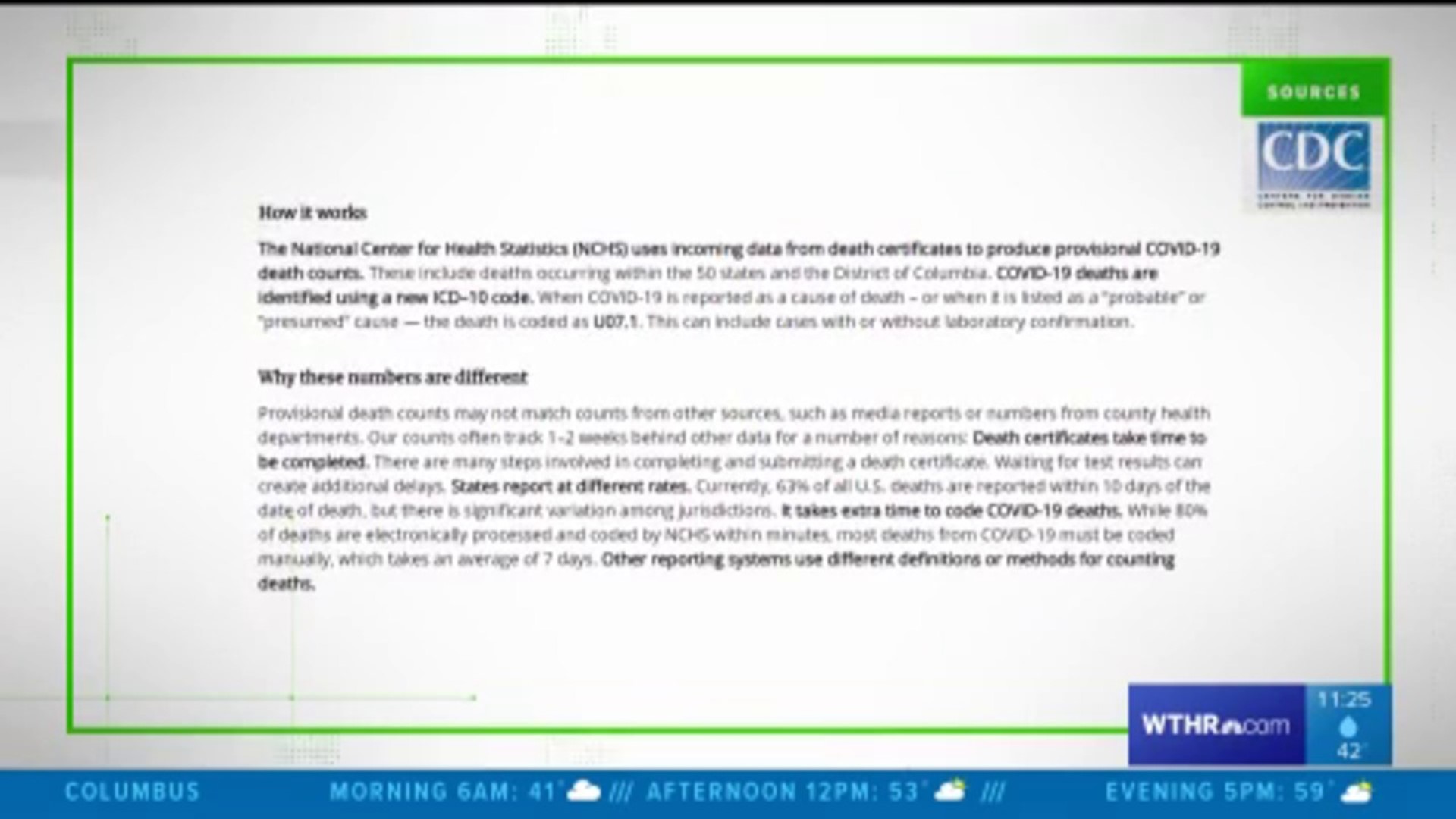 WASHINGTON (TEGNA) - Similar posts appearing on multiple platforms made the claim that the Centers for Disease Control and Prevention lowered the number of COVID-19 deaths.

While the details varied slightly, most claimed that the death count had gone from around 55,000 down to about 37,000 deaths.

And most of the claims linked directly to a CDC page as proof.

Did the CDC change or revise their death counts to be roughly 30,000 cases lower?

No. There are actually two separate death counts on the CDC’s website. The main number was 68,279 at the time this article was written. That number comes from states sending their totals to the CDC.

A separate count is kept by the National Center for Health Statistics and is based off a second check of states' death certificates by the NCHS. Since this count requires states to send death certificates to the NCHS for review, it lags 1-to-3 weeks behind the main number.

According to the CDC, this number represents the data reported by “U.S. states, the District of Columbia, and other U.S.-affiliated jurisdictions.”

The number in the viral claims above comes from a separate page on the CDC’s website with “provisional counts for the coronavirus disease.”

It may be confusing to have two CDC pages with counts that are nearly 30,000 apart, but they’re both able to be accurate.

The larger number is the total reported to the CDC by states. Each state counts their death certificates and sends a report on COVID deaths to the CDC.

But the smaller number comes from a second check of the death certificates that states send to the National Center for Health Statistics or NCHS. And since they have to get these certificates from each state and then process them again, their data quote “often track 1-2 weeks behind other data.”

The NCHS provided an explanation at the bottom of the page titled: “Why these numbers are different.”

“Our counts often track 1–2 weeks behind other data for a number of reasons: Death certificates take time to be completed. There are many steps involved in completing and submitting a death certificate. Waiting for test results can create additional delays. States report at different rates. Currently, 63% of all U.S. deaths are reported within 10 days of the date of death, but there is significant variation among jurisdictions. It takes extra time to code COVID-19 deaths. While 80% of deaths are electronically processed and coded by NCHS within minutes, most deaths from COVID-19 must be coded manually, which takes an average of 7 days. Other reporting systems use different definitions or methods for counting deaths,” it reads.

That time estimation lines up. CDC archives from two weeks ago show about 39,000 deaths reported by states.

We can VERIFY these claims are false. The CDC didn’t lower or revise the COVID death count. They have two separate counts. One is a direct, current report from states.The other is a second count of death certificates that’s a few weeks behind.