Thousands of Indiana heart-surgery patients at risk of dangerous infection

13 Investigates has learned at least a dozen Indiana hospitals are now sending warning letters to more than 8,000 open heart surgery patients to warn them they may be at risk of a life-threatening infection linked to a medical device used during their operation. 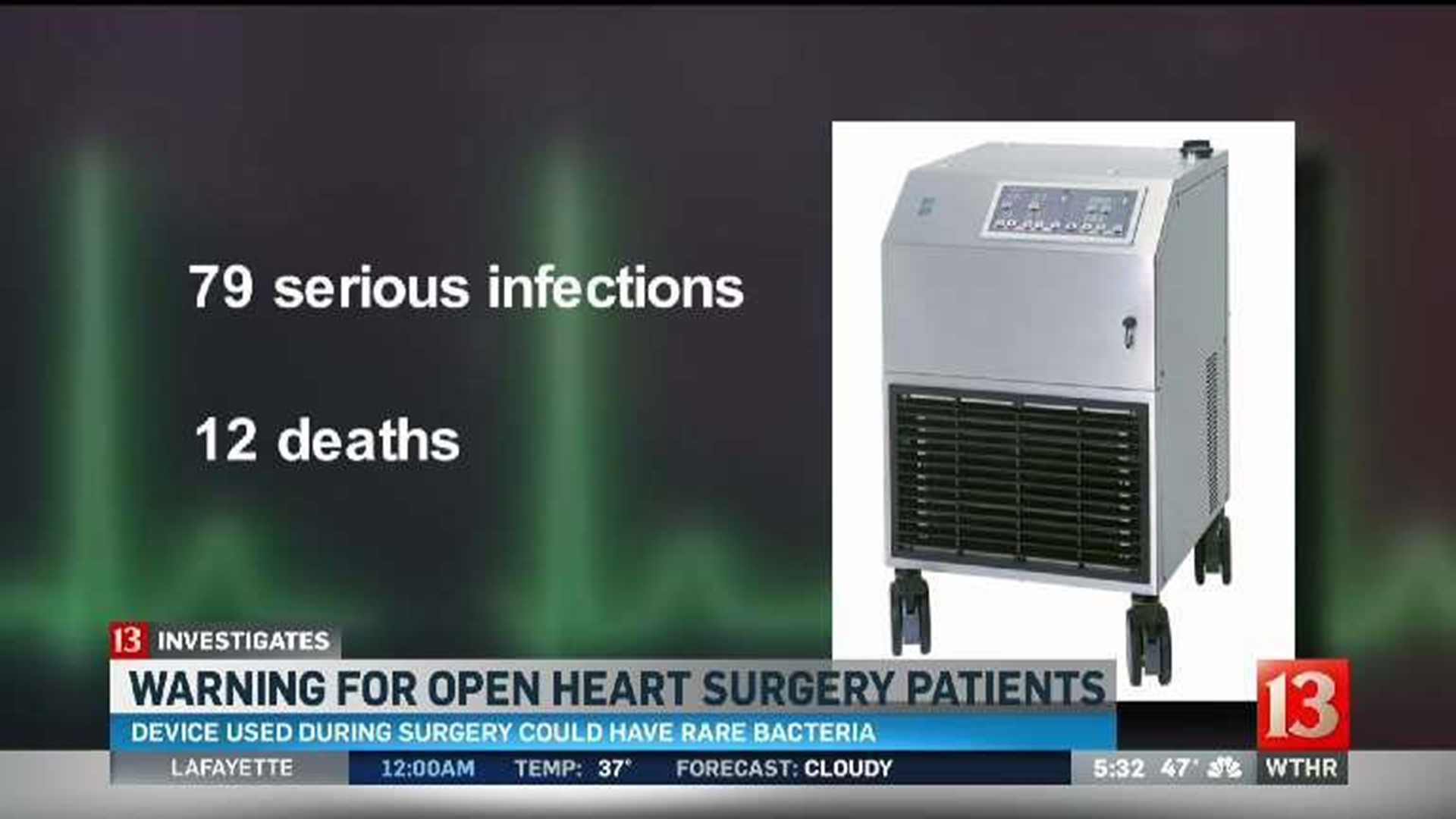 INDIANAPOLIS (WTHR) - 13 Investigates has learned at least a dozen Indiana hospitals are now sending warning letters to more than 8,000 open heart surgery patients to warn them they may be at risk of a life-threatening infection linked to a medical device used during their operation.

Among the notifications: IU Health says in the next few weeks, it will be sending letters to 6,500 patients who were hooked up to a Stockert 3T heater-cooler, a device commonly used to heat and cool a patient’s blood during a heart surgery. The Roudebush VA Medical Center tells WTHR it recently sent warning letters to 430 patients on whom it used the device. Franciscan Health says it notified about 800 open-heart surgery patients, and Community Health sent letters to about 600.

From 2010 to 2016, the U.S. Food and Drug Administration and U.S. Centers for Disease Control received at least 91 reports of patients who developed a nontuberculous mycobacterium (NTM) infection linked to the heater-coolers. Worldwide, the infections have resulted in at least 12 patient deaths, according to the FDA.

The Indiana Department of Health says it is not aware of any NTM cases linked to the heater-cooler units. Nearby states such as Michigan, Iowa and Minnesota have reported infections. The pulmonary illness can develop slowly over the course of months or years, and it can take more than a year of antibiotic treatment to cure.

The CDC recently advised hospitals who used the suspect medical devices to notify patients of the potential danger. The FDA released a warning, as well. About 600,000 patients nationwide who had heart operations involving the machines between 2012 and 2016 are at risk.

IU Health tells WTHR it used the heater-cooler units during heart operations at its Methodist, University, Arnett and Bloomington hospitals. After additional questions from 13 Investigates, IU Health acknowledged the device was also used on about 1,000 children who had cardiac operations at Riley Hospital for Children, the largest pediatric hospital in Indiana.

"We are complying with the CDC’s recommendation and are in the process of notifying approximately 6,500 patients (to be completed by mid-January), who received open heart surgery from 2012 until recently. We have no reported cases of the infection, and our physicians are aware of the situation as they provide patient care," explained IU Health public relations consultant Alexandra Neff.

Franciscan Health said heart patients at three of its hospitals -- Indianapolis, Lafayette and Crown Point – received letters over the past two months.

VA hospitals around nation – including those in Indiana – started sending warning letters to their impacted patients earlier this month.

"As if we haven’t dealt with enough," said Jean Brewster, whose husband Craig recently received a warning letter from the Minnesota VA hospital where he had a heart surgery. "He has some of the symptoms that they're listing for that possible bacteria (infection) as far as night sweats and fatigue… it makes me wonder," she told Minneapolis NBC affiliate KARE-TV.

"It’s important to remember this isn’t just a VA thing or an Indianapolis thing. It’s a national thing," said Roudebush VA Medical Center spokesman Pete Skovill. "It’s very unfortunate it happened, but it’s a manufacturer issue that’s out of our control. The good news is every one of our patients has been notified and their doctors are closely monitoring."

Skovill said the Roudebush VA Medical Center wants affected patients to be acquainted with the symptoms of NTM, and those impacted are encouraged to call the center’s hotline (317-988-3541) with concerns or questions.

Patients who have had a heart surgery and who are concerned about the possible infection risk are advised to contact their doctor for more information.

“Patient safety and quality of care are top priorities at Community Health Network. Following recommendations by the Centers for Disease Control and Prevention (CDC), Community is notifying patients who have had open heart surgery about a potential risk for a rare infection. Recent findings by the CDC indicate a device, which is manufactured by a third party and used by hospitals worldwide to heat and cool the blood during surgery, may have been contaminated during manufacturing.

Community Heart and Vascular Hospital began utilizing one of these devices in 2012, but immediately and voluntarily decommissioned the device in 2015 when it learned of the potential for contamination. The device utilized by Community has been tested by an independent laboratory and, to date, the results show no indications of contamination. No patients who have undergone open heart surgery at Community Heart and Vascular Hospital have been identified as having the infection.”

Four IU Health hospitals used this device – IU Health Methodist, University, Arnett and Bloomington. We are complying with the CDC’s recommendation and are in the process of notifying approximately 6,500 patients (to be completed by mid-January), who received open heart surgery from 2012 until recently. We have had no reported cases of the infection, and our physicians are aware of the situation as they provide patient care.

A device used to heat and cool the blood during open heart surgery was investigated by the FDA and CDC and was found to have been linked to a potential risk to patients from a rare bacterial infection caused by a type of bacteria known as nontuberculous mycobacterium (NTM). According to the CDC, for patients who have had one of these surgeries using this device, the chances of getting this infection are very low. CDC estimates the risk to be less than 1 percent. This infection cannot be spread person-to-person. Like many other hospitals across the United States, Franciscan Health hospitals in Indianapolis, Crown Point and Lafayette had used the device. Franciscan Health contacted patients who may have been at risk and provided them with information and a toll-free number to call should they have any questions. The patients’ physicians also were notified.

The Centers for Disease Control and Prevention (CDC) and the Food and Drug Administration (FDA) recently issued guidance in response to reports that medical devices used to heat and/or cool blood during surgery have been associated with Mycobacterium chimaera, a species of nontuberculous mycobacterium (NTM). The CDC has recommended that patients who have been exposed to the Soren coolers be contacted and made aware of their potential exposure. This medical device is employed at public, private and VA hospitals around the country. CDC puts the possible infection rate at less than 1%. It cannot be spread from person to person. The VA is dedicated to fully communicating the risk to our Veteran Patients. Richard L. Roudebush VA Medical Center notified 430 patients of the CDC findings to acquaint them with the symptoms. Patients receiving notification letters will be closely monitored by their primary care team and encouraged to call the facility hotline with any concerns 317 988 3541.

St. Mary’s Hospital in Evansville briefly used the Sorin Heater-Cooler Unit for performing cardio-pulmonary open-chest surgeries. These devices have been replaced since the FDA reports. We have no indication that the NTM bacterial infection affected any of our patients. In an abundance of caution, we have notified patients and ensured that they, along with their healthcare providers, were aware of these reports. For patients who had a surgery using this device, the chances of getting this infection are very low, as the CDC estimates the risk being less than 1 percent.

Terre Haute Regional Hospital is following the CDC’s national recommendations to hospitals which include notifying patients who have had an open-heart procedure using this device. Experts at the CDC have said the possibility of transmission is very low, and patients more than two symptom-free years from their surgery do not need to worry about this issue. We’re not aware of any infections among our patients from this device at this time. We are following the manufacturer’s updated cleaning and usage instructions, which are designed to eliminate risk.

As of 12/29, Indiana hospitals and hospital systems that have sent or are sending warning letters to their heart surgery patients (number of patients impacted):

Hospitals reporting that they did NOT use the heater-cooler device in their cardiac surgeries: 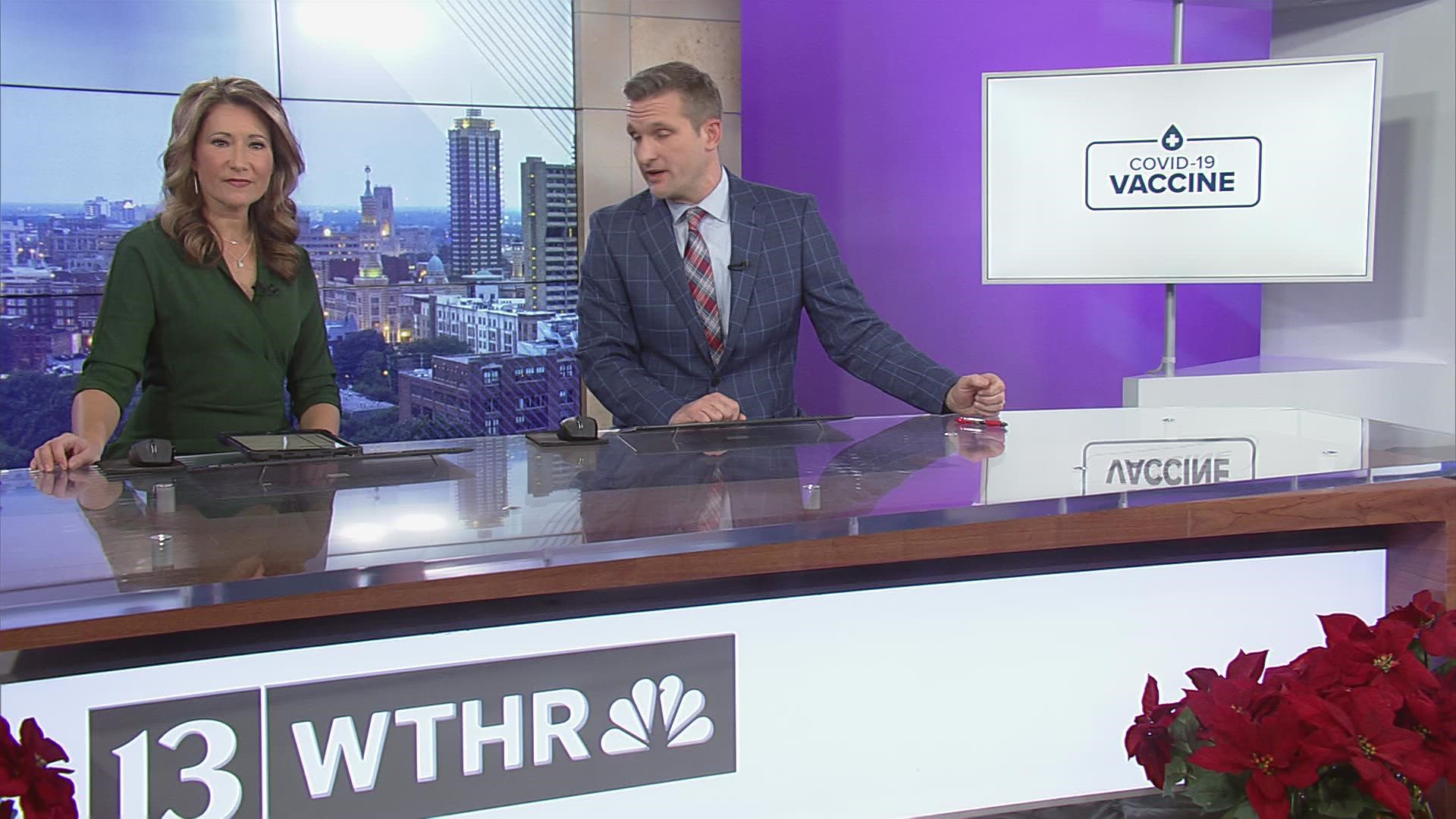