The directive to limit visitors came from the Centers for Medicare and Medicaid Services (CMS). 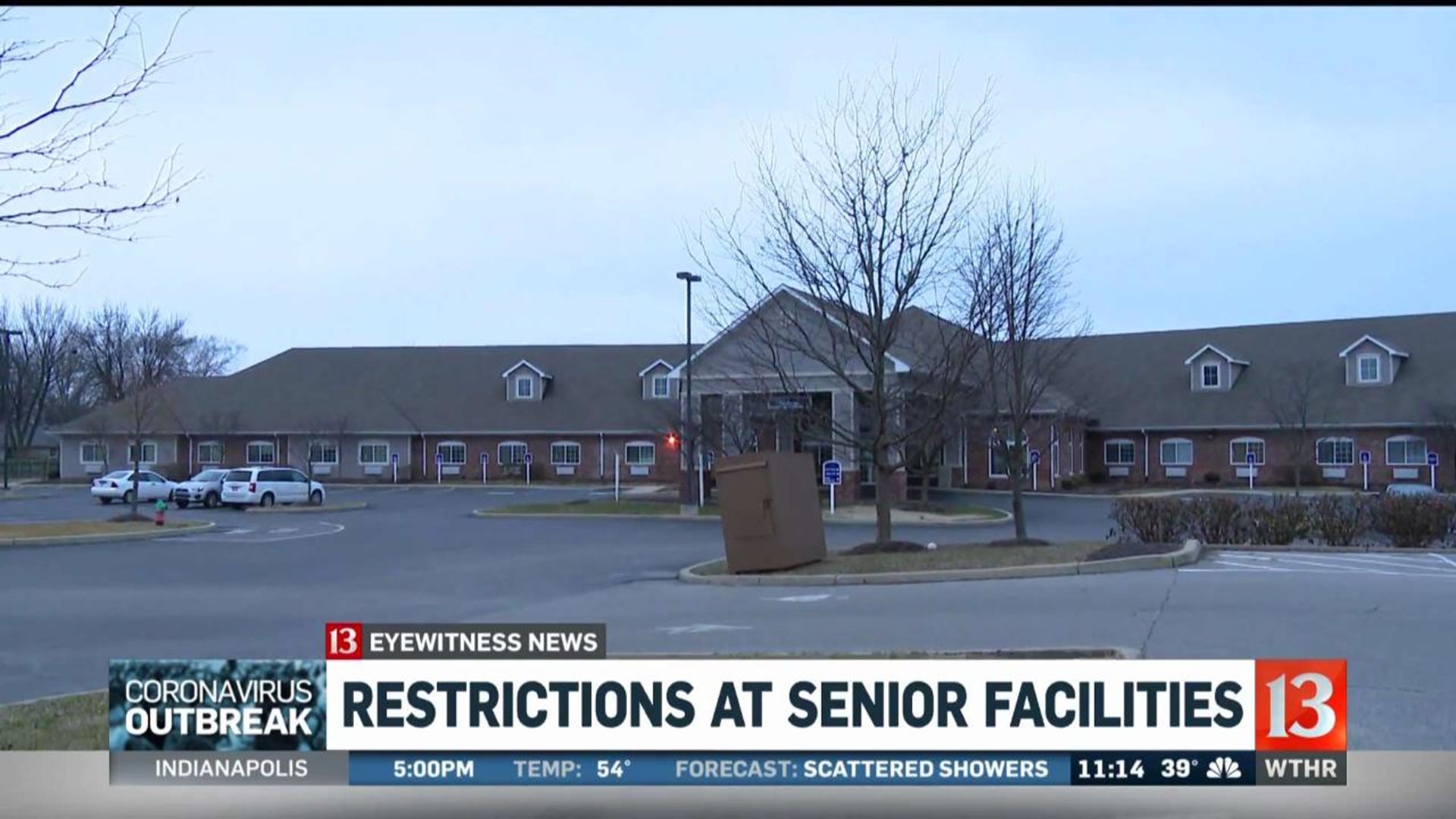 INDIANAPOLIS (WTHR) — On Tuesday, Eyewitness News began receiving calls and emails from people concerned that they were being told they could no longer visit family members in nursing homes.

In some cases they were told by nursing home staff that the information came from the CDC or Indiana State Department of Health (ISDH).

The directive to limit visitors came from the Centers for Medicare and Medicaid Services (CMS). The decision was made Monday and in many cases family members were informed Tuesday by nursing home staff that they would no longer be allowed to visit a loved one.

The directive is because those over the age of 65 and those with underlying medical issues are more at risk of death or serious issues from COVID-19.

The guidance applies to nursing homes in counties, or those counties adjacent to a county with a confirmed case of COVID-19.

The directive instructs nursing homes in those situations to limit visitors and gives the following example:

For example, a daughter who visits her mother every Monday, would cease these visits, and limit her visits to only those situations when her mom has a significant issue. Also, during the visit, the daughter would limit her contact with her mother and only meet with her in her room or a place the facility has specifically dedicated for visits.

In counties that fall outside of those situations where there is a case of COVID-19 nearby, nursing homes have been instructed to discourage visitors. Anyone visiting might be screened for symptoms or risk factors that could then prevent them from visiting a loved one.

CMS has not indicated how long these limitations on visitation could last.

Eyewitness News reached out to ISDH, who said, "ISDH has not issued any directives independent of CMS guidelines."

Robert Ziegler tries not to miss a day visiting his 82-year-old mother Dottie at Greenwood Meadows, a skilled nursing facility.

"I'm able to come most days after work or Saturdays in the morning," Ziegler said.

Now, though, those visits are on hold after American Senior Communities restricted visitors, an effort to prevent the coronavirus from spreading to residents at its facilities.

"Obviously, it's better to be a day early than a day late on that, so I think it's a good call," said Ziegler.

Under the guidelines, visitors are only allowed under certain situations, like if a resident is about to pass.

Ziegler isn't worried for his mother, an Alzheimer's patient.

"That's probably a little silver lining in this condition is she really won't notice most likely," Ziegler said.

Besides visitor restrictions, nursing facilities are taking other steps to prevent spread of the coronavirus.

Residents at Senior Apartments Benjamin Court recently received notification that all activities had been been canceled until further notice.

A letter also advised residents to stay in their apartments and not make unnecessary trips or have visitors.

"If it saves lives, yeah, I think that's alright," one resident told us.

But not all residents are happy. One who feared retaliation for speaking out talked with us by phone.

"It's almost like I am quarantined," the resident, who asked to remain anonymous, said "What about food? Are we supposed to get food? I guess. I don't know."

Eyewitness News called the property manager to ask about the restrictions. No one called us back.

Ziegler knows it could be a long haul, not seeing his mom until the virus is contained. He's not happy it's come to this, but he's accepted it.

"It's not pleasant, none of it's pleasant. I think it makes sense," he said.

If you have a loved one in a nursing home, you should check with the facility about any visitor restrictions that may or may not now be in place.

You can read more on the guidance from CMS to nursing homes here.