As a cold-natured person, I wasn't sure if I could make it the entire three minutes. 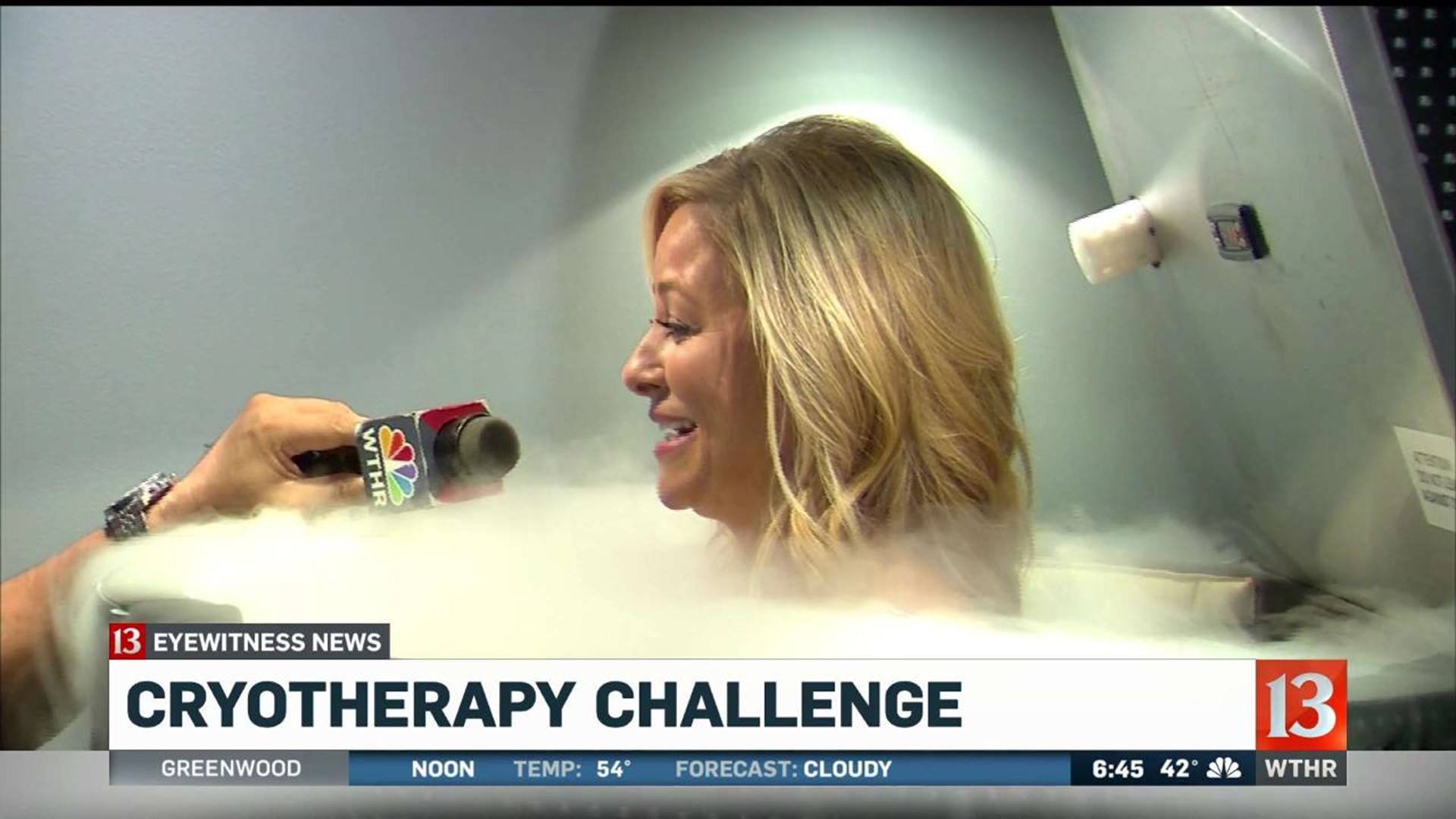 INDIANAPOLIS (WTHR) — I had heard of cryotherapy before. But as someone who is usually cold, to say I was not interested in standing in a tank that's -200 F is putting it mildly. I mean, I have a heating pad at my desk and on the set pretty much all year round.

But Carlos wanted Ben and me to try it for a story he was working on. Once I heard about all the potential health-related benefits, I was pretty excited to give it a try.

It was developed in Japan in its current form by Dr. Toshima Yamaguchi in 1978 to treat rheumatoid arthritis. Within several years, the medical community recognized whole body cryotherapy (WBC) benefits beyond treating arthritis and began using it more broadly to treat soft tissue pain, inflammation, fibromyalgia, psoriasis, increase metabolism, and to revitalize skin.​

Unlike when you go outside on a cold day, WBC is a dry process. Because dry cold does not penetrate the body like cold air with moisture, WBC temperatures are able to be much colder than what would be possible on a normal winter day.

I was simply told to bring my swimsuit, and prepare for the coldest temperature I'd ever felt. When we arrived we were greeted by a friendly staff and Dr. Charbel Harb who runs the Indianapolis clinic. Right away we noticed all the pictures of Colts players and other elite athletes who have used the clinic to speed up recovery after a game or an injury. That was reassuring to know: If they can count on it, we could too.

I'm certainly not an athlete, but I do work out regularly, so I often have aches and pains from running, rowing and lifting weights in my OrangeTheory class. I've also been dealing with a nagging tennis elbow recently. The doctor assured me people have gotten relief from this after a few visits. He also showed me some exercises he said will help, and even sent me home with an exercise ball and gel for the soreness.​

We had to sign a few waivers, but that makes sense and is no surprise. Before we went into the chamber, Dr. Harb took his time explaining exactly what we will do and how it will feel. He said the temperature of the chamber is still cooling down, but ideally is around -200 F to -240F for the treatment. You can only stay in for three minutes. I put my suit on and took off all my jewelry because you don't want any metal on you.

We got fluffy robes, gloves, socks and some sweet looking black Crocs to protect our extremities. But that's it, and you obviously have to take the robe off once you're in.​

I got to watch Ben go first, so it gave me a better idea of how I would react. Unlike me, Ben is always hot. I thought it would be easier on him, but the doctor does said women tend to do better than the men inside the chamber.

Ben did great, but he was absolutely ready to get out when his three minutes were up. I wasn't sure if I could do it considering how cold-natured I am, but it was my turn, so I had no choice. Once I got in and just 40 seconds had gone by, I was sure there was no way I was going to be able to last the entire three minutes.

We were told if we move around slightly it would help. At about a minute and a half, I started to switch feet and move as much as I could. It did help, but really only because it distracts you just enough. By two minutes, my teeth were chattering and my legs were the coldest part of my body. Finally, my three minutes are up, and I was so happy to get out and throw on my robe.

It really only took a few minutes to warm back up, so that is a bonus. The rest of the day I felt pretty normal. There was no amazing health breakthrough, but Dr. Harb assured me I would sleep like a baby, and feel great the next day. It was nothing drastic, but I will say I feel like I had more energy the day after. I would like to give it a few more tries to see if I get a more noticeable health benefit.