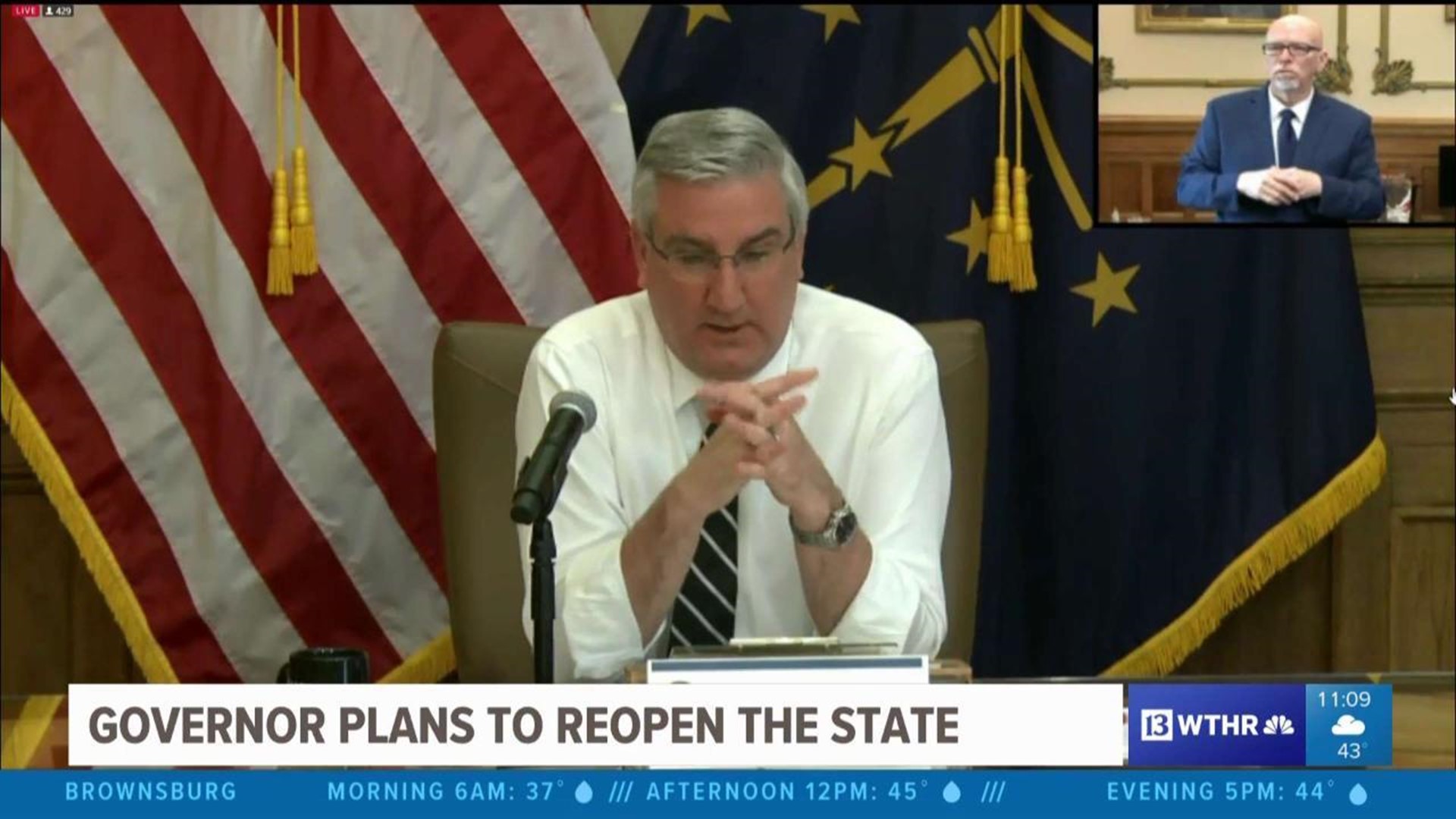 The Trump administration has issued new guidelines for states, individuals and employers on how to ease up on social distancing to deal with the coronavirus in areas where COVID-19 are on the decline.

The guidelines distributed to governors are published under the headline “Opening Up America Again.”

The guidelines say states or regions should meet certain criteria before moving to a phased opening. For example, there needs to be a downward trajectory of documented COVID-19 cases within a 14-day period and a robust testing program in place for at-risk health care workers.

The White House Coronavirus Task Force is providing an update on the national response. The President is expected to explain a plan for reopening the country and getting the economy started again.

For states and regions that satisfy the criteria for a “phase one” opening, the guidelines recommend that vulnerable individuals should continue to shelter in place. Others who go out should avoid socializing in groups of more than 10 people in places that don’t provide appropriate physical distancing. Trade shows are cited as an example.

For specific types of employers, it’s recommended that bars remain closed as part of phase one. However, theaters, sporting venues and churches can open “under strict physical distancing protocols.”

Trump to governors: 'call your own shots' on reopening states

President Donald Trump has told the nation’s governors “you’re going to call your own shots” as he prepared to unveil national guidelines on when and how the country starts to recover economically from the coronavirus pandemic.

Trump is set to issue new guidelines aimed at clearing the way for an easing of restrictions in areas with low transmission of the coronavirus, while keeping them in place in harder-hit places. Ultimately, decisions on when to ease up will rest with governors.

Trump talked to governors before he unveils the guidelines to the public in the evening. The announcement comes on the same day the government said 5.2 million more Americans applied for unemployment benefits last week.

Trump said on Monday that his “authority is total” to reopen states but has since backed away from that claim after governors pointed out the Constitution does not grant the president that power.

Trump told the governors some of them are in good shape to open their states quickly, but others are in tough shape. He remarked that requests for ventilators have gone away, adding, “I say that respectfully.” He also asserted that “we’re in excellent shape” on testing, which many health care officials have disputed.

Seven Midwestern governors announced Thursday that they will coordinate on reopening their state economies, after similar pacts were made earlier this week in the Northeast and on the West Coast.

The governors say they will work with experts and take a “fact-based, data-driven approach to reopening our economy in a way that protects families from the spread of COVID-19.”

Altogether, the 17 states covered by the three pacts are home to nearly half the U.S. population.

Governor Eric Holcomb said that they are thinking it will be early May that they will be able to reopen the state economy.

It will be a slow process that is done in parts.

A decision on exactly when will be made in the coming weeks as the governor said he didn't want to put a date on it right now.

About 45 percent of ICU beds are still available along with 75 percent of the ventilators in the state.

Indiana's primary election is set to take place on June 2.

Any registered voter can request an absentee ballot by mail anytime before May 21. Limited early in-person voting will be available from May 26 to June 1.

The state is requesting federal funds to secure PPE for voting sites and materials for sanitizing areas and voting booths.

Voting results will take longer to count and handle so there will be delays.

Students may not be returning to campus for the rest of this academic year, but 2020 graduates will still experience commencement.

Butler University announced on Thursday that it would postpone its spring and summer commencement's to the winter.

We're happy to announce that we will hold a formal Commencement ceremony for all May, August, and December, 2020 graduates on Friday, December 18 at 6:30 PM in Hinkle Fieldhouse.

Commencement will take place at 6:30 p.m. at Hinkle Fieldhouse.

"Saturday Night Live" star Michael Che is honoring the memory of his grandmother, who died from coronavirus, by helping out those in need impacted by the COVID-19 pandemic.

Che posted on Instagram Wednesday night that he thinks it's crazy residents of public housing in New York City are still being expected to pay their rent when so many residents can't even work.

The actor and comedian went on to explain that "in the spirit and memory of my late grandmother," Martha, he would be paying one month's rent for all 160 apartments in the New York City Housing Authority building where she used to live.

Che explained in his Instagram post that he knows paying peoples' rent for a month is just a "drop in the bucket" and he hopes the city has "a better plan for debt forgiveness for all the people in public housing, AT THE VERY LEAST."

The Indiana State Department of Health has released new data regarding COVID-19 in the state. On Thursday, April 16, Indiana had 611 new confirmed cases of coronavirus, totaling 9,542 confirmed cases.

Forty-one more people have died in the state from the virus, those deaths occured over the last two weeks. It brings the state's death total to 477 Hoosiers.

To date, a total of 51,115 people have been tested in the state, according to ISDH.

Marion County had the most new cases, at 113. Other counties with more than 10 new cases were are:

The wave of layoffs that has engulfed the U.S. economy since the coronavirus struck forced 5.2 million more people to seek unemployment benefits last week.

Roughly 22 million have sought jobless benefits in the past month — easily the worst stretch of U.S. job losses on record.

The United States has 638,111 confirmed cases of COVID-19 as of midnight ET Thursday morning, according to Johns Hopkins University. There have been 30,925 deaths and 52,640 recoveries in the U.S. More than 3.2 million tests have been conducted.

Worldwide, there have been more than 2 million confirmed cases with nearly 137,000 deaths and 512,000 recoveries.

For most people, the coronavirus causes mild or moderate symptoms, such as fever and cough that clear up in two to three weeks. For some, especially older adults and people with existing health problems, it can cause more severe illness, including pneumonia, and death.

Rams center first NFL player to reveal he has COVID-19

Allen is the first active NFL player to acknowledge testing positive during the coronavirus pandemic.

The third-year pro is not hospitalized and is “feeling good,” according to a statement issued by the Rams on Wednesday night only after Allen spoke to Fox Sports about his positive test.

Allen became the team's starting center last season. He played in nine games before missing the rest of the year with a knee injury.

The U.S. Food and Drug Administration has approved a low-cost ventilator developed by the University of Minnesota and aimed at helping COVID-19 patients breathe.

The FDA authorized use of the compact device, known as the Coventor, that was quickly developed and designed by a team of university researchers, a medical school resident and an engineer.

The developers hope the Coventor will be used in clinical settings where traditional ventilators are unavailable.