Updates on the coronavirus pandemic on Sunday, April 5, 2020. 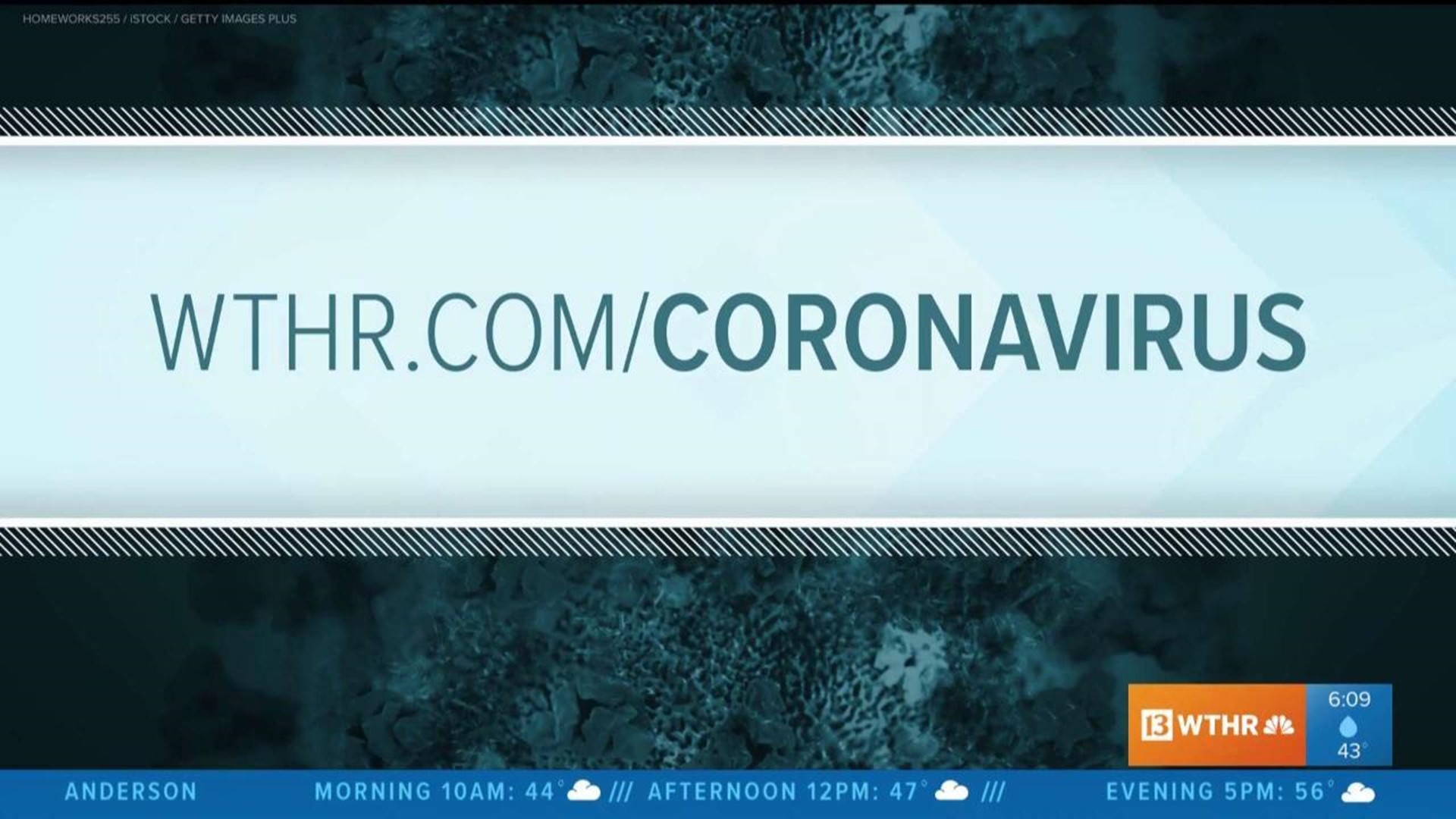 The President and White House staff are expected to hold a news conference about COVID-19. The presser is expected to happen at 6:45 p.m.

A tiger at the Bronx Zoo in New York City has tested positive for the new coronavirus. It's believed to be the first infection in an animal in the U.S. and the first known in a tiger anywhere.

The U.S. Department of Agriculture said Sunday that the 4-year-old Malayan tiger, and six other tigers and lions that have also fallen ill, are believed to have been infected by a zoo employee.

The zoo says all the animals are expected to recover.

BP says it is offering 50 cents off per gallon to first responders and health care workers for their next fill-up at a BP or Amoco gas station.

According to BP, the discount is being offered this month to first responders, doctors, nurses and hospital workers to thank them for their efforts amid the fight against the coronavirus pandemic

Anyone eligible must verify their community status online through ID.me to obtain the discount.

Once you have your discount code, you can redeem it at the pump the next time you stop for gas. According to BP, the discount codes can be claimed from now until April 30.

For more information on the offer, including how to receive a code, click here.

Queen Elizabeth II: History will remember your actions during crisis

Britain needed a message of hope. The queen delivered it Sunday. Queen Elizabeth II offered a message of support to a country locked down in the coronavirus pandemic, promising the nation that it would rise to the challenge and overcome the outbreak.

In a rare address to the nation, the 93-year-old monarch acknowledged the suffering that many families have experienced because of the COVID-19 crisis, which has infected more than 47,806 people in the U.K. and killed at least 4,934 of them. She drew upon wisdom from her decades as Britain’s head of state to urge resolve in a time of crisis.

Her Majesty The Queen addresses the UK and the Commonwealth in a special broadcast recorded at Windsor Castle. pic.twitter.com/HjO1uiV1Tm

Defense Secretary Mark Esper has issued new requirements for those visiting or working on Department of Defense installations regarding the use of cloth face coverings. Esper says that “to the extent practical,” all individuals on DOD property “will wear” the face coverings when they cannot maintain 6 feet of social distance from others.

The guidance is effective immediately. It follows a recommendation from the Centers for Disease Control and Prevention that encourages people, especially in areas hit hard by the spread of the coronavirus, to use rudimentary coverings such as T-shirts, bandannas and non-medical masks to cover their faces while outdoors.

Esper outlined the new requirements in a memorandum to senior military leaders Sunday. He said the requirement doesn’t apply to a service member’s personal residence on a military installation. But it does apply to work centers and other public areas.

The secretary says exceptions may be approved by local commanders or supervisors and then submitted up the chain of command for awareness.

According to Fauci, this is because it is unlikely to be under control globally.

Fauci is director of the National Institute of Allergy and Infectious Diseases. He says the virus is unlikely to be completely eradicated from the planet this year. That means the U.S. could see the “beginning of a resurgence” during the next flu season.

Fauci says the prospect of a resurgence is the reason the U.S. is working so hard to get its preparedness “better than it was.” He says that includes working to develop a vaccine and conducting clinical trials on therapeutic interventions.

Fauci also says states that don’t have stay-at-home orders are not putting the rest of the country at risk as much as they are putting themselves at risk.

Pope Francis has begun the first of several Holy Week ceremonies that will be held without the public this year because of the coronavirus pandemic.

Normally, tens of thousands of Romans and pilgrims, clutching olive branches, would have flocked to an outdoor Mass led by the pontiff. Instead, Francis was leading the ceremony inside the shelter of St. Peter’s Basilica, which seemed even more cavernous than usual because it was so empty.

Besides his aides, a few invited prelates, nuns and laypeople were present, sitting solo in the first pews and staggered, so they could stay a couple of meters (yards) apart to reduce the risk of contagion.

Wearing red robes and appearing pensive, Francis blessed braided palms held by the others, then held one himself. The Vatican has said there are seven cases of COVID-19 among residents or employees of the tiny independent city-state.

Queen Elizabeth II to use address to acknowledge suffering

Queen Elizabeth II is expected to use a rare address to the nation to acknowledge the suffering many families have experienced because of the COVID-19 pandemic.

The monarch will offer a deeply personal message, describing the moment as a “time of disruption in the life of our country: a disruption that has brought grief to some, financial difficulties to many, and enormous changes to the daily lives of us all.”

She plans to praise the National Health Service for its work and laud those who volunteered to help out in a time of crisis.

On Sunday 5th April at 8pm (BST)
Her Majesty The Queen will address the UK and the Commonwealth in a televised broadcast.

As well as on television and radio, The Queen’s address will be shown on The @RoyalFamily’s social media channels. pic.twitter.com/EADh7WNU7b

She plans to say that she hopes in the future everyone will be able to feel “pride” in how they rose to the situation and that “those who come after us will say that the Britons of this generation were as strong as any.’’

The address was recorded in the White Drawing Room at Windsor Castle. The location was chosen specifically because it allowed enough space between the monarch and the camera person, who wore personal protective equipment.

As the first alarms sounded in early January that an outbreak of a novel coronavirus in China might ignite a global pandemic, the Trump administration squandered nearly two months that could have been used to bolster the federal stockpile of critically needed medical supplies and equipment.

HHS declined this past week to say how many N95 masks it has on hand. But as of March 31, the White House said more than 11.6 million had been distributed to state and local governments from the national stockpile — about 90 percent of what was available at the start of the year.

Experts are now worried the U.S. will also soon exhaust its supply of ventilators.

Americans brace for 'hardest, saddest' week of their lives

Americans braced for what the nation's top doctor warned Sunday would be "the hardest and saddest week" of their lives while Britain assumed the unwelcome mantle of deadliest coronavirus hotspot in Europe after a record 24-hour jump in deaths that surpassed even hard-hit Italy.

"This is going to be our Pearl Harbor moment, our 9/11 moment,'' U.S. Surgeon General Jerome Adams told "Fox News Sunday."

Colts owner Jim Irsay said he has more than 10,000 N95 masks that he's donating to the Indiana State Department of Health to get to health care facilities that are in the most need.

Just procured 10,000+ masks ( N-95) and am passing them along to Indiana State Dept. of Health for distribution as most urgently needed.#INthistogether

Breakdown of Indiana cases by age and gender

Here's a full breakdown of the age groups making up positive cases:

Sunday, the health department reported 127 deaths. Of those deaths, 59.8 percent were men.

Here's a full breakdown of the age groups making up COVID-19 deaths:

Indiana has surpassed 4,400 positive cases of COVID-19. The most recent report from the Indiana State Department of Health says 4,411 cases have been reported across the state.

Marion County saw the most new cases with 191.

ISDH is also reporting 11 more deaths since Saturday, bringing the total to 127. ISDH said the agency reports the dates as they receive reports, so they could have happened over multiple days.

Sunday morning, 22,652 tests had been reported to the state — nearly 3,000 more than reported Saturday.

Fishers Police officers working the night shift on Friday showed up and flashed their lights to support and encourage health care workers at IU Health Saxony Hospital. They also cranked up the song "Eye of the Tiger."

Earlier that same day, officers dropped off lunch to the health care workers at St. Vincent Fishers. In turn, workers stood outside with signs to say thank you and to support the work of FPD. One of the signs said: "Heroes Helping Heroes."

Patricia Bosworth, an actress who once starred alongside Audrey Hepburn and later wrote biographies on several stars including Marlon Brando and Montgomery Clift, has died due to the coronavirus. She was 86.

Bosworth’s stepdaughter, Fia Hatsav, told The New York Times that pneumonia brought on by the virus was the cause of death. Bosworth died on Thursday in New York.

The number of U.S. deaths from COVID-19 passed the 8,500 mark shortly after 2:45 a.m. EDT Sunday after it was at more than 7,100 less than 24 hours before, according to numbers from Johns Hopkins University. More than a quarter of those are in New York.

For most people, the coronavirus causes mild or moderate symptoms, such as fever and cough that clear up in two to three weeks. For some, especially older adults and people with existing health problems, it can cause more severe illness, including pneumonia, and death.

The map is best viewed on desktop. Tap or click for bigger view from Johns Hopkins University.