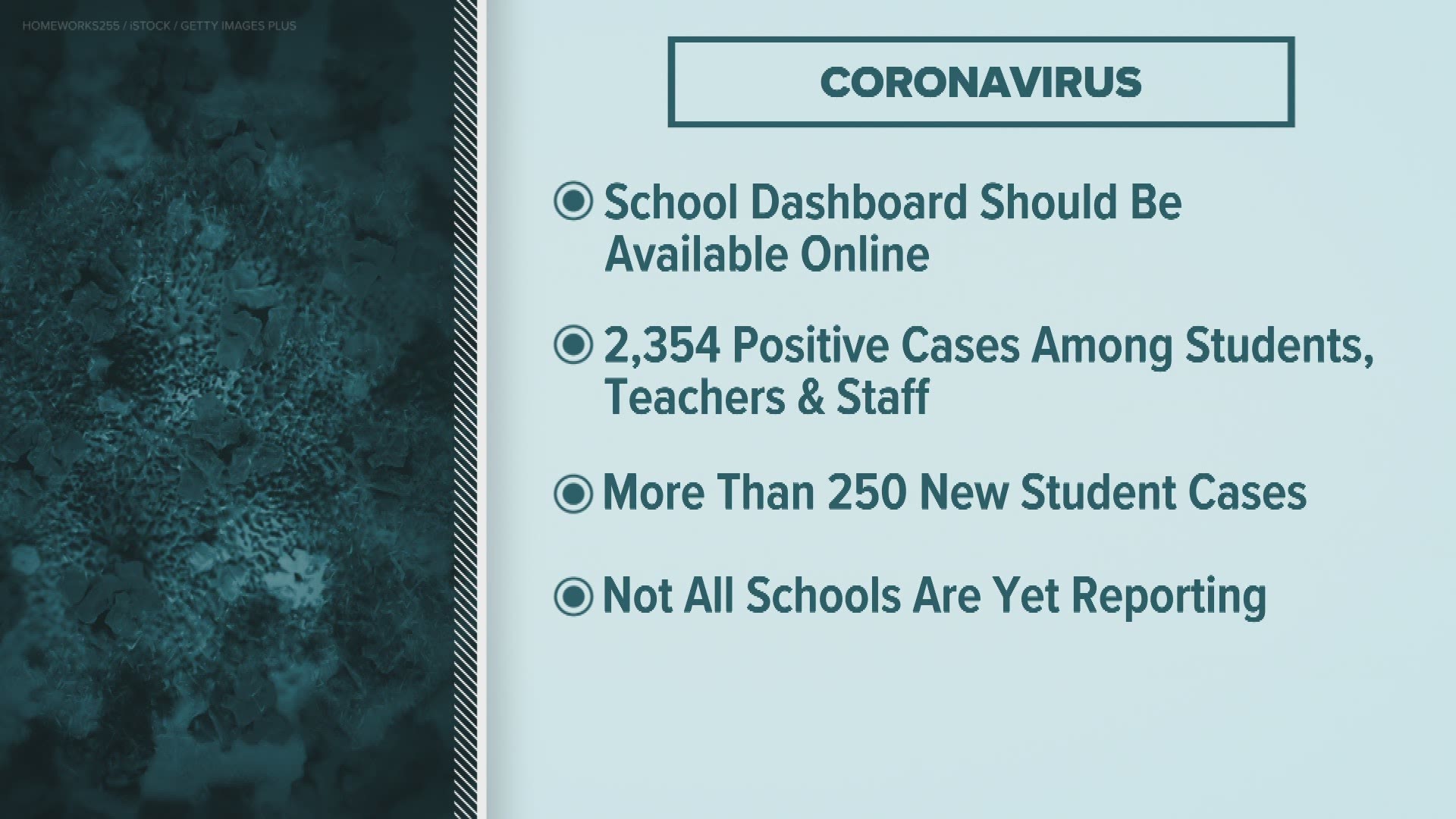 Governor Holcomb and health leaders are giving an update on the state's response to COVID-19.

Today, the @StateHealthIN commissioner talked about Halloween guidance and difference between a costume mask and a cloth mask. #WTHR pic.twitter.com/ctt7HjxYWo

ISDH gives latest update on COVID-19 data in the state

The Indiana State Department of Health reported that there were 965 new confirmed cases of COVID-19 in the state, bringing the total to more than 120,000 cases.

Additionally, there were 20 more deaths. More than 3,000 Hoosiers have died from the virus.

The first COVID-19 outbreak to hit the NFL has led to at least one game being rescheduled.

The Tennessee Titans were scheduled to host Pittsburgh in a matchup of two of the league's seven remaining undefeated teams on Sunday, but that game will now happen either Monday or Tuesday, the league confirmed Wednesday morning.

Tennessee suspended in-person activities through Friday after the NFL said Tuesday that three Titans players and five personnel tested positive for the coronavirus. The NFL had played three weeks without a COVID-19 outbreak.

An additional Titans player learned early Wednesday morning that they also had tested positive for COVID-19.

The NFL said the game will be played either Monday or Tuesday.

All Hoosiers — even those who are not Hamilton County residents — can be tested at Trinity Free Clinic. Sign up to make an appointment here.

Hamilton County's current testing site at 400 Lafayette Road in Noblesville will close Friday, Oct. 2. It will reopen Monday, Oct. 5 at its new location at Ivy Tech Community College in Noblesville. The entrance to the testing site will be at Door 9 on the west side of the building above WorkOne.

Newly released data reveals COVID-19 cases among children have risen dramatically over the past five months.

According to the American Academy of Pediatrics, less than 3 percent of coronavirus cases in April were from kids; however, in the last few weeks, children make up 12-16 percent of newly reported cases.

The good news is kids typically don't get as sick with coronavirus as adults.

In fact, children represent fewer than 2 percent of hospitalizations in the U.S. and less than 1 percent of total deaths.

Experts say pediatric cases surged in the northeast in April, in the south and west in June and in the Midwest in July.

Worldwide, there have been 33.64 million confirmed cases with more than 1 million deaths and 23.38 million recoveries.

More than a dozen football players at the University of Notre Dame have tested positive for COVID-19 and are currently in isolation.

According to a press release, the university tested 273 student-athletes on the Fighting Irish football team, and 18 tests came back positive.

Tens of thousands of Disney Parks employees will lose their jobs, the company announced Tuesday.

Josh D'Amaro, chairman of Disney Parks, Experiences and Products, released a statement saying about 28,000 domestic employees will be affected by the cuts. Of those, 67 percent are part-time cast members.

"We are talking with impacted employees as well as to the unions on next steps for union-represented Cast Members," D'Amaro wrote.

The layoffs come amid ongoing COVID-19 impacts on the theme park industry and the continued closure of Disney's parks in California.

D'Amaro wrote that "the continued uncertainty regarding the duration of the pandemic" has been "exacerbated in California by the State's unwillingness to lift restrictions that would allow Disneyland to reopen."

Disney Parks did not specify the number of job cuts by theme park locations.

How can I volunteer for a COVID-19 vaccine study?

Governments and companies are setting up websites where people can sign up to volunteer for COVID-19 vaccine studies.

Enthusiasm is high: More than 400,000 people have signed a registry of possible volunteers that’s part of a vaccine network set up by the U.S. National Institutes of Health.

But before raising your hand, it’s important to understand how the research works.

Initial studies include only a few dozen young, healthy volunteers, since this is the first chance to see if a shot causes a risky reaction in people. Older adults, anyone with a serious underlying illness, and pregnant women are typically excluded from this testing stage.

Mid-stage studies of COVID-19 vaccines recruit a few hundred people, including some older adults. The focus is on comparing how people's immune systems react to different doses, as well as getting more safety data.

In final-stage studies, scientists need tens of thousands of volunteers who reflect the diversity of the population, including those at high risk of severe illness from the virus. So volunteers can include people who are over age 65 and people with chronic health problems such as diabetes.

Inclusion of Black, Hispanic/Latino, & Native American communities in #COVID19 research is needed in order to develop vaccines & treatments that work for everyone. Trials should be as diverse as the people at risk for the disease: https://t.co/9cevztSbI1 #NIH pic.twitter.com/7XowjKv7lE

Enough study participants have to be exposed to the virus for researchers to be able to tell if the vaccine works. That’s why essential workers, such as grocery or transportation workers who come into frequent contact with others, are especially sought after for the last testing phase. It’s also why researchers are recruiting in places where the virus is spreading, not areas that have it under control — so even if you meet the eligibility criteria, you might not be called back, depending on where you live.

Volunteers won't know if they’re getting the vaccine or a dummy shot.

The World Health Organization counts 10 vaccines worldwide in this final stage of testing, and dozens more are in earlier stages.