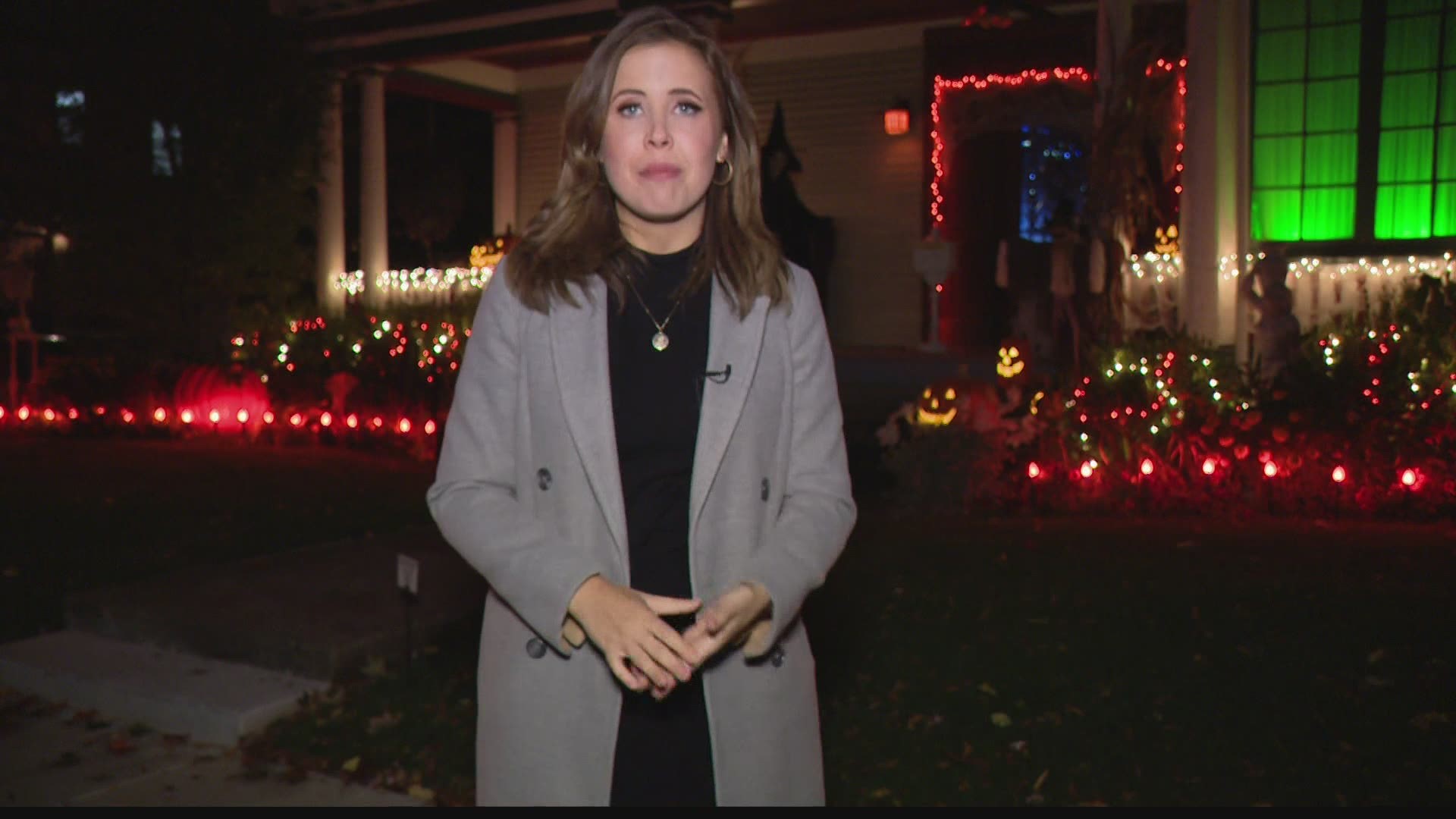 Mayor Hogsett opened the news conference with positive news: The positivity rate of COVID-19 in schools is steady.

Hogsett said the current seven-day positivity rate in Marion County is 5 percent. And while people are looking forward to loosening some restrictions, they would continue in an effort to mitigate the spread of the virus.

Hogsett reiterated the Marion County Public Health Department's guidelines on celebrating Halloween — avoiding face-to-face parties, trick-or-treating, and other events. He encouraged Marion County residents to continue being mindful of others and doing everything they can to slow the spread.

Caine said for now, she expects capacity at Colts games to remain at 12,500.

Gov. Eric Holcomb has officially signed an executive order to extend Stage 5 of the state's reopening plan and the state's mask mandate until Nov. 14.

The Eiteljorg Museum is taking one of its popular holiday celebrations online. The museum's Día de Muertos events will be all virtual this year.

There will be online experiences from Oct. 28 through Nov. 2. Participants will get to see a variety of cultural acts and artists. Here are some arts appearances on the schedule:

There will also a lineup of local favorites:

ISDH reports 1,962 new confirmed cases of COVID-19 in the state and 23 more deaths. That's a new single-day record for positive cases in the state, beating the previous record of 1,937, set last week.

State leaders have continuously said the goal is to keep the positivity rate below 5 percent.

ISDH reported 1,355 COVID-19 patients were in hospitals across the state Wednesday — the highest number since May 13, when there were 1,381 hospitalized patients receiving care for COVID-19.

Governor Eric J. Holcomb has tested negative for COVID-19, according to a statement shared by his office this morning.

The Governor was tested after learning that State Health Commissioner Dr. Kristina Box had tested positive for COVID-19 on Wednesday after she spent time with her grandson and daughter, who also tested positive.

According to Dr. Box and Dr. Weaver, the Governor and staff members did not meet the Centers for Disease Control and Prevention’s definition of close contact as they were socially distanced and wore masks during their interactions with Dr. Box.

“Janet and I are wishing Dr. Box and her family a speedy recovery,” Gov. Holcomb said in the announcement. “The coronavirus does not discriminate, and this further highlights the importance of wearing masks and social distancing.”

Dr. Box and Dr. Weaver have advised Gov. Holcomb that he can resume his normal schedule with vigilance about masking and social distancing.

Dr. Box will quarantine for 14 days.

The virtual press conference is scheduled to start Thursday, Oct. 15 at 3:30 p.m.

The number of Americans seeking unemployment benefits rose last week to 898,000, a historically high number and evidence that layoffs remain a hindrance to the economy’s recovery from the pandemic recession that erupted seven months ago.

Thursday’s report from the Labor Department shows that the job market remains fragile, and it coincides with other recent data that have signaled a slowdown in hiring. The economy is still roughly 10.7 million jobs short of recovering all the 22 million jobs that were lost when the pandemic struck in early spring.

The government’s report Thursday said the number of people who are continuing to receive unemployment benefits dropped 1.2 million to 10 million. The decline signals that many of the unemployed are being recalled to their old jobs.

The job search website Indeed said its job postings were unchanged last week, remaining about 17% below last year’s levels. Many employers still aren’t confident enough in their businesses or in their view of the economy to ramp up hiring. Job postings had rebounded steadily over the summer, but the gains have slowed in the past two months.

The recession has disproportionately hurt in-person service industries, especially restaurants, hotels, travel companies and entertainment venues. The damage to those industries has left millions of people unemployed, likely for an extended period until they are either finally recalled to their previous jobs or switch to new careers.

Ohio has added Indiana to its travel advisory list after testing rates rose higher than 15 percent, based on a 7-day rolling average of positivity rates of Oct. 14.

The recommendation is that people self-quarantine for 14 days after coming to Ohio from one of those states.

DeWine said people should self-quarantine at home or in a hotel.

This applies to visitors, as well as people who live in Ohio returning from vacation or business travel.

Worldwide, there have been 38.51 million confirmed cases with more than 1.09 million deaths and 26.68 million recoveries.

Gov. Holcomb announced Stage 5 would continue at least through the next month. The mask mandate will continue to stay in place.

Dr. Box said she has tested positive, along with her daughter and her grandson. Box said since the pandemic began, she has kept close contact only to her immediate family. She believes her grandson contracted the virus from daycare, and she picked it up from him and his mother.

Movie theater giant AMC Theatres is fighting to raise funds as the company faces a situation that could see its cash resources "largely depleted" by the end of the year.

As the movie theater industry faces unprecedented financial challenges amid the coronavirus pandemic, AMC's CEO says it's not considering bankruptcy at the moment.

AMC CEO Adam Aron told Bloomberg that the company was throwing all its efforts now into raising additional capital.

"We'd like to succeed in this effort. If we don't, obviously we'll have to consider other options down the road. But that time has not yet arrived, and any reports to the contrary are wholly inaccurate."

Aron was responding to reports from Tuesday that the movie giant was considering filing for bankruptcy.

While a majority of AMC locations have reopened, the film release calendar has shrunk and theaters are operating at reduced capacity.

Last week, Regal cinemas, the second-largest movie theater chain in the U.S., announced it was temporarily closing all its locations due to a lack of blockbuster films on the horizon and major markets remaining closed. But AMC, the country's largest theater chain, said it would remain open, the Associated Press reported. AMC's CEO acknowledged at the time that as the nation's largest theater chain, the Regal closings placed serious questions on the theater chain's future.

BIG News! MONSTERS, INC. is now part of the AMC Spooktacular Series! For just $5+Tax, you can see this fan favorite at #AMCTheatres. Check showtimes and get tix: https://t.co/nhVji2ZsHx pic.twitter.com/Fcl212VBWl

Canadian Prime Minister Justin Trudeau says the border will remain closed until the U.S. can get a handle on the coronavirus as cases rise again. The Prime Minister is also urging Canadians to think about the health risks if they choose to travel abroad.

“We will continue to make sure that Canadian safety is top of mind when we move forward. We see the cases in the United States and elsewhere around the world, and we need to continue to keep these border controls in place,” Trudeau said in a radio interview Wednesday.

Non-essential international travel into Canada has been banned since March, but with exceptions for trade. Trudeau said Canadian citizens can still travel outside the country, but wants them to be aware of the risks involved and how it may affect their access to health care when they travel abroad.

"If someone chooses to travel, we're not going to keep them imprisoned in Canada. There is a freedom of movement in this country," Trudeau said. "People have to recognize that they're putting themselves at risk, they're putting their loved ones at risk and they may not have the kinds of supports or health insurance or repatriation flights that we did early on if they choose to leave the country."