Parents, students, and others say the shot should be a choice, not a requirement, to work at IU or attend classes. 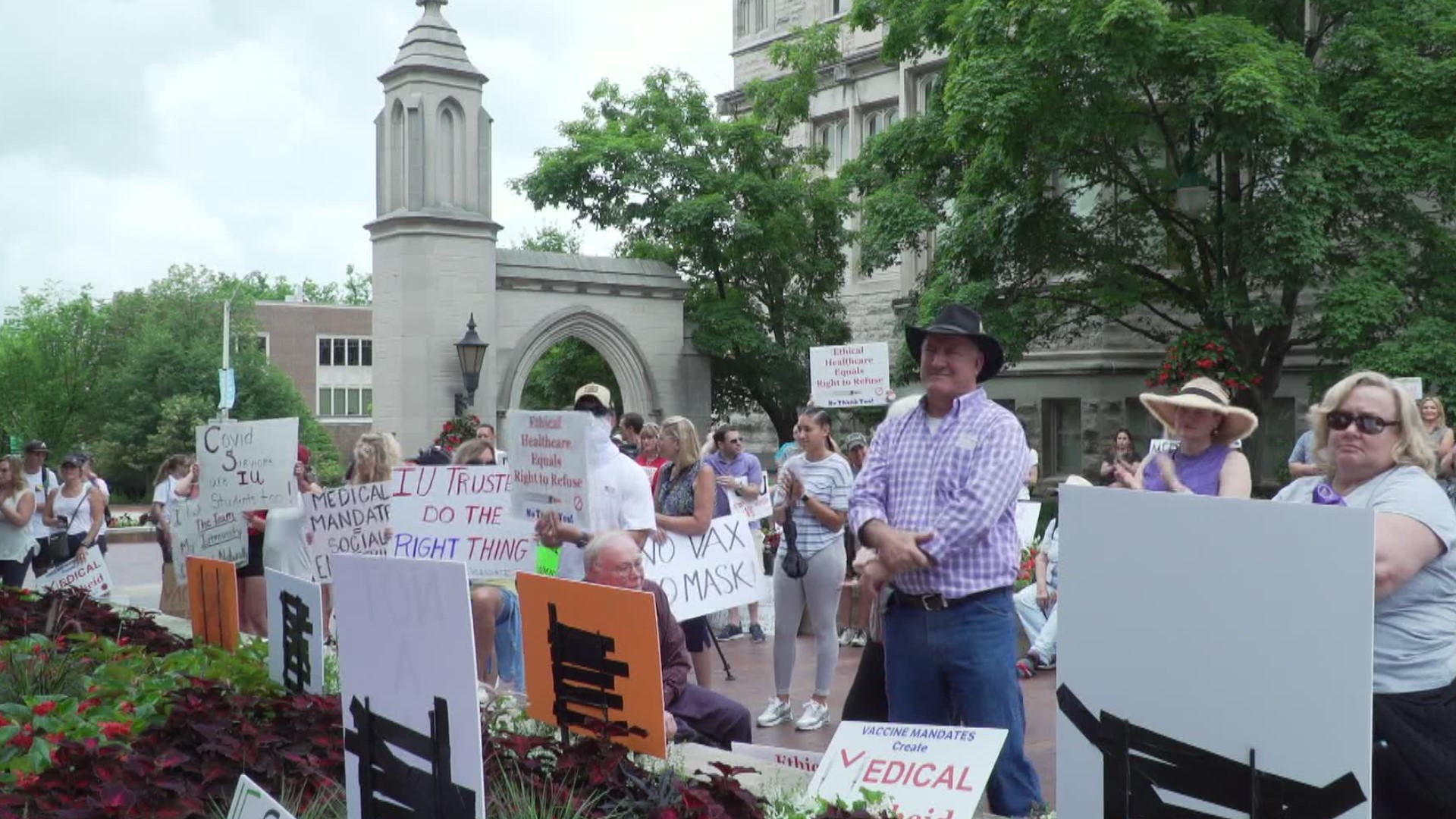 Parents, students, and others say the shot should be a choice, not a requirement to work at IU or attend classes.

Protesters claim many reasons for not getting the shot, clearly stated on signs they held and with their voices.

"To force this on our kids is not only morally and ethically wrong, it's criminal,” said Ann Dorris, an IU parent and now president of IU Family for Choice Not Mandates.

The group scheduled its protest to coincide with the IU Board of Trustees meeting.

"I hope what it will accomplish is the voice of the people to be heard, that this is a very concerning situation for them, that no one should be forced into doing something against their medical freedom,” said Dorris.

RELATED: Indiana University to require all students and staff to have COVID-19 vaccine by fall semester

IU is requiring every student, faculty member and staff to receive the COVID-19 vaccine before returning to campus in August.

Credit: WTHR
Protesters gathered outside the Sample Gates at IU Bloomington Thursday, June 10, 2021 to speak out against the school's COVID-19 vaccine mandate.

Laura McCormick attended the rally, holding a sign that read “medical mandates = social engineering” on one side and “It’s mutating into medical dictatorship” on the other. McCormick’s daughter just graduated from Hamilton Heights High School.

Mom is reconsidering whether to let her daughter come to IU this fall.

"My concern is for the freedom of my children and my children's children,” said McCormick. “I think that we've let our government and our private/public partnerships go too far in controlling our lives in America."

Jaime Carini is a graduate music student at IU. Carini told the crowd she has been advised against the vaccine because of her medical condition. But she's worried she may not receive an exemption.

RELATED: IU will not require COVID-19 vaccine documentation from employees and staff, but it will offer incentives

"I would encourage students, even if you want to get the vaccine, even if you don't, advocate for your personal choice, because some people are in really complicated positions,” said Carini.

Protesters believe IU is taking away their choice for a vaccine with only emergency use authorization and too many long-term unknowns.

Indiana University is requiring the vaccine, but will not require documentation that employees and students have received the shot. But those who provide proof will be entered into an incentive program and be eligible for prizes, including full in-state tuition.