Patient with muscular dystrophy issues call to vaccinate the vulnerable

William Kuhn is calling for high-risk patients like himself to be eligible to get the COVID-19 vaccine, even if they aren't yet within the state's guidelines. 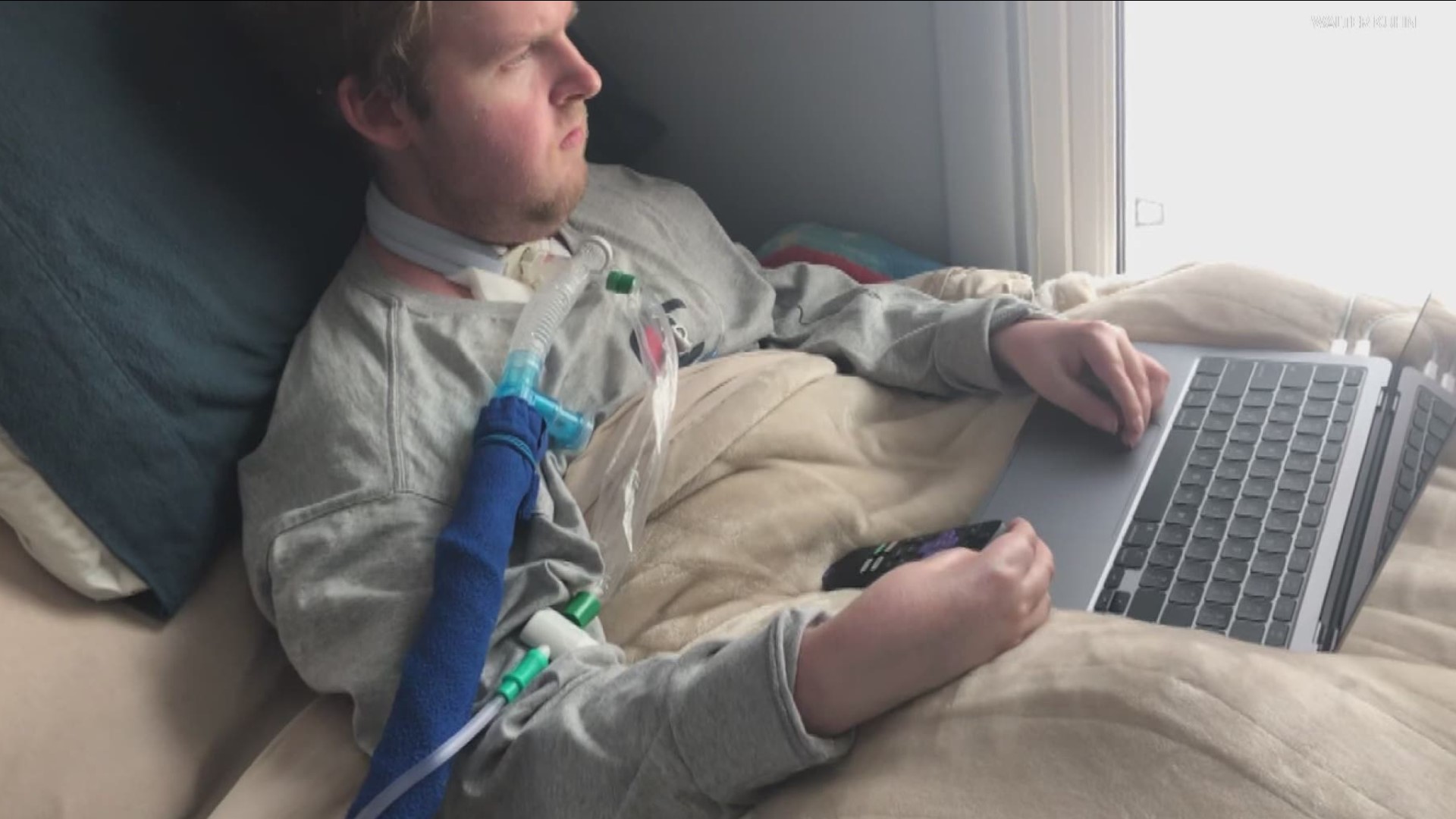 INDIANAPOLIS — Sitting at home waiting for a COVID-19 vaccine has been agonizing for William Kuhn. The 29-year-old has muscular dystrophy and has been "stuck" at his family home on the north side of Indianapolis since the start of the pandemic.

This week, he expressed his frustration on his Facebook page.

"I still don't understand why I can't get the vaccine yet. I've been stuck in my house for over a year, live on a vent and on oxygen," Kuhn wrote. He ended the post with #VaccinatetheLion and #FreetheLion.

For Kuhn, talking is complicated by the breathing tube placed directly into his windpipe. He mostly communicates through his computer keyboard from his bed.

His father, Walter, said the social media post was the best way for his son to reach out, vent, and let others know about his agonizing wait.

"We check the websites almost daily and as soon as we get... as soon as his number is called, we're there," Walter Kuhn said. "It hasn't been called yet and it's just frustrating because it's been six weeks since we've had a vaccine and started this process and he sees healthy people getting the vaccine, and here's a situation where (COVID-19) would be a death sentence to him."

The Kuhn family is caring for Will at home with the help of home health aides. If he were staying in a nursing home instead, getting a Pfizer or Moderna COVID-19 vaccine would be no problem.

"You know, he was almost being punished for not being institutionalized for having parents and family members that are committed to taking care of him at home. He's almost, like, being punished for it," said Dr. Louis Profeta, a family friend and emergency room physician at Ascension St. Vincent.

Profeta wrote an article published on LinkedIn about Will's life during the pandemic and how playing virtual poker with friends has helped him pass the time with joy.

The Kuhn family insists they don't want to jump the line, but they do question the decision to not provide a way to vaccinate the state's most vulnerable patients. Right now, the Indiana State Department of Health has restricted vaccine distribution to medical and emergency workers and Hoosiers who are 65 years of age and older. The winter storm delayed expected shipments of the vaccines to Indiana this week and stalled a plan to lower the age limit to 60.

Profeta supports the age-based distribution plan and suggests that it be supplemented with referrals from physicians statewide who could provide state authorities a list of patients like Kuhn who are at higher risk of dying from COVID-19 if they were to contract it.