Hospitalized Indiana firefighter's family pleads for people to get vaccinated

Justin Guillemette took precautions against COVID-19, but his wife said he was hesitant about getting vaccinated. 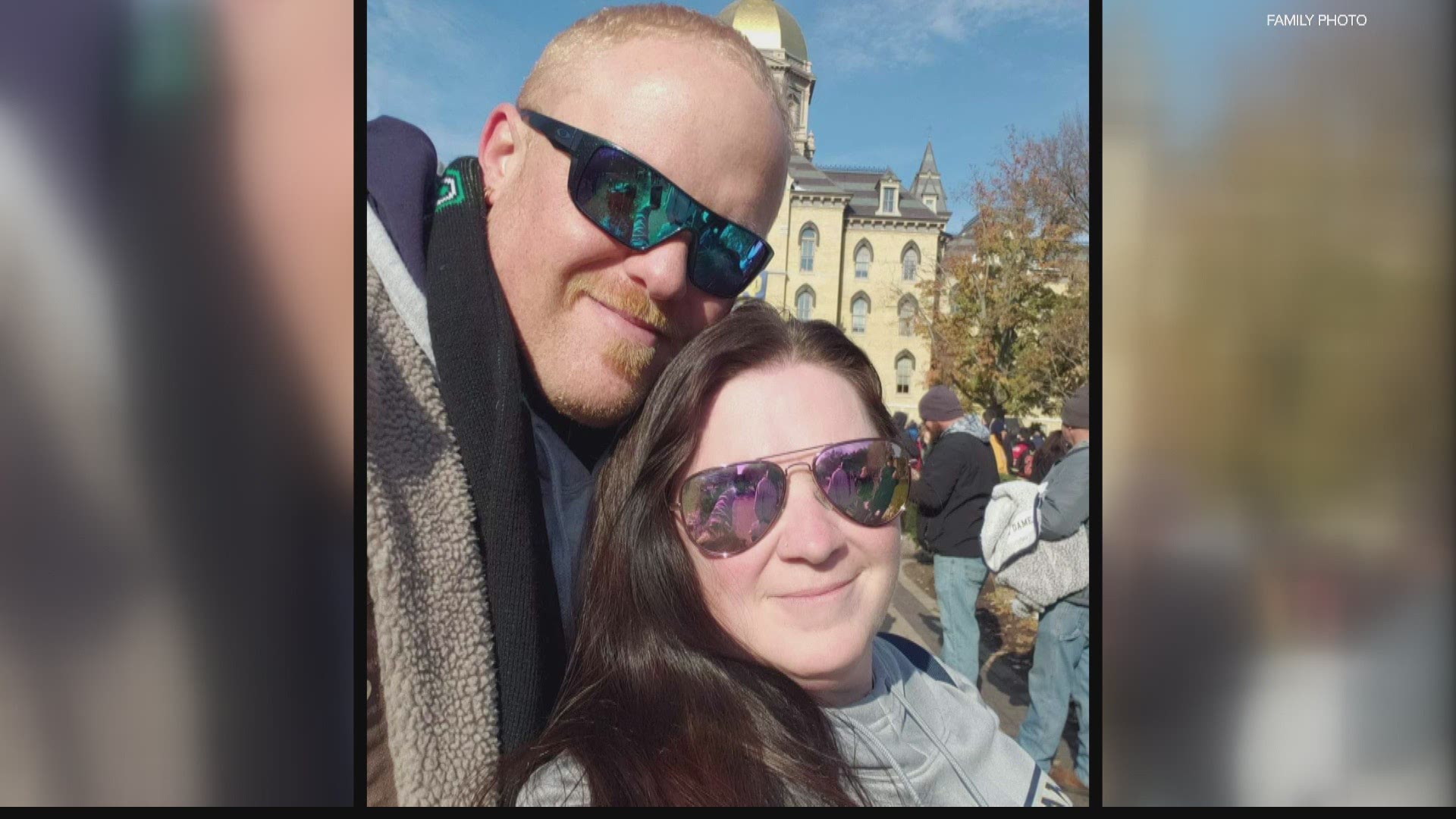 ELWOOD, Ind. — The wife of an Indiana firefighter is sharing an urgent plea for people to get vaccinated.

Holli Guillemette said her husband was hesitant about the shot, didn't get the vaccine and now her public safety hero is struggling to survive.

Her warning comes amid data from the Indiana State Department of Health showing COVID-19 cases rising rapidly in Indiana and most of the people hospitalized are unvaccinated.

As a volunteer firefighter/EMT with the Pipe Creek Township Fire Department near Elwood, Justin Guillemette has spent a decade protecting and saving people's lives.

But now his own life is in jeopardy from COVID-19. Leery of the shot, his wife said Justin wouldn't get vaccinated.

"It was a little bit of a battle between he and I," Holli said. "There was fear of the unknown, I think. Also, he thought he was safe. He felt he was taking enough proper protocols and the people around him that he would be OK and it hit him like a ton of bricks. Now, he is in the fight for his life. I mean that's basically the only way I can put it."

Justin's wife and daughter, who did get vaccinated, are praying for a miracle and pleading for others to get protected.

"He was very careful," Holli said. "So it says to me, 'get the shot, because anything that you can do to keep yourself from being where he is, you want to do it.' Protect yourself. Protect your family. It's important."

Credit: Pipe Creek Township Fire Department
Justin Guillemette has been a volunteer firefighter/EMT for more than a decade.

Just two weeks ago, Justin tested positive for COVID-19. Holli said a coworker at his full-time job got sick, then Justin did, too.

Within hours, the firefighter and Air Force veteran ended up in the hospital in Elwood. He and his sick coworker have since both been transferred to Ascension St. Vincent in Indianapolis.

Doctors tell Holli her husband's situation is dire. He's now on a ventilator and an ECMO machine.

"The ECMO is almost like their last effort to save COVID patients. It takes his blood, filters it for carbon dioxide, takes it out and puts good oxygen back into the blood and then reinserts it back into his body," Holli explained. "We don't know if he'll ever come home and have been told that if he does, it's going to take a lot of therapy to get him to even halfway normal, if ever."

Holli's now sharing Justin's journey on Facebook and she's leaning on support from the Elwood community.

"It's overwhelming how much love they've shown and how much they've all stepped up," she said.

Elwood is holding a vaccination clinic in Justin's name next Wednesday from 5:30 to 7:30 p.m. in between the intermediate and high school. It's sponsored by the city and the hospital.

She is hopeful for a large turnout.

"Some people say 'the vaccines aren't 100%.' Well, they may not be 100%. but they may keep you from becoming as severe as he is," Holli said. "The last thing I ever want to see is anyone else go through what we have."

She's also hoping no other family has to wonder "what if I'd just gotten that shot?"

"Justin, he told me before they put him on the ventilator that once he gets through it, he would definitely have the shot and that was before it got really, really bad," Holli said. "They always say hindsight's 20/20. Hopefully, it's not too late."

Holli said since sharing her husband's story on Facebook, people have reached out saying they got the shot because of him.

To learn more about the clinic and Justin's Journey, click here.