Behind the Mask: Respiratory therapist says it won't be the pandemic that changes his career choice

As a frontline worker, Ryan Spartz has seen the havoc COVID-19 can wreak on a person’s body. 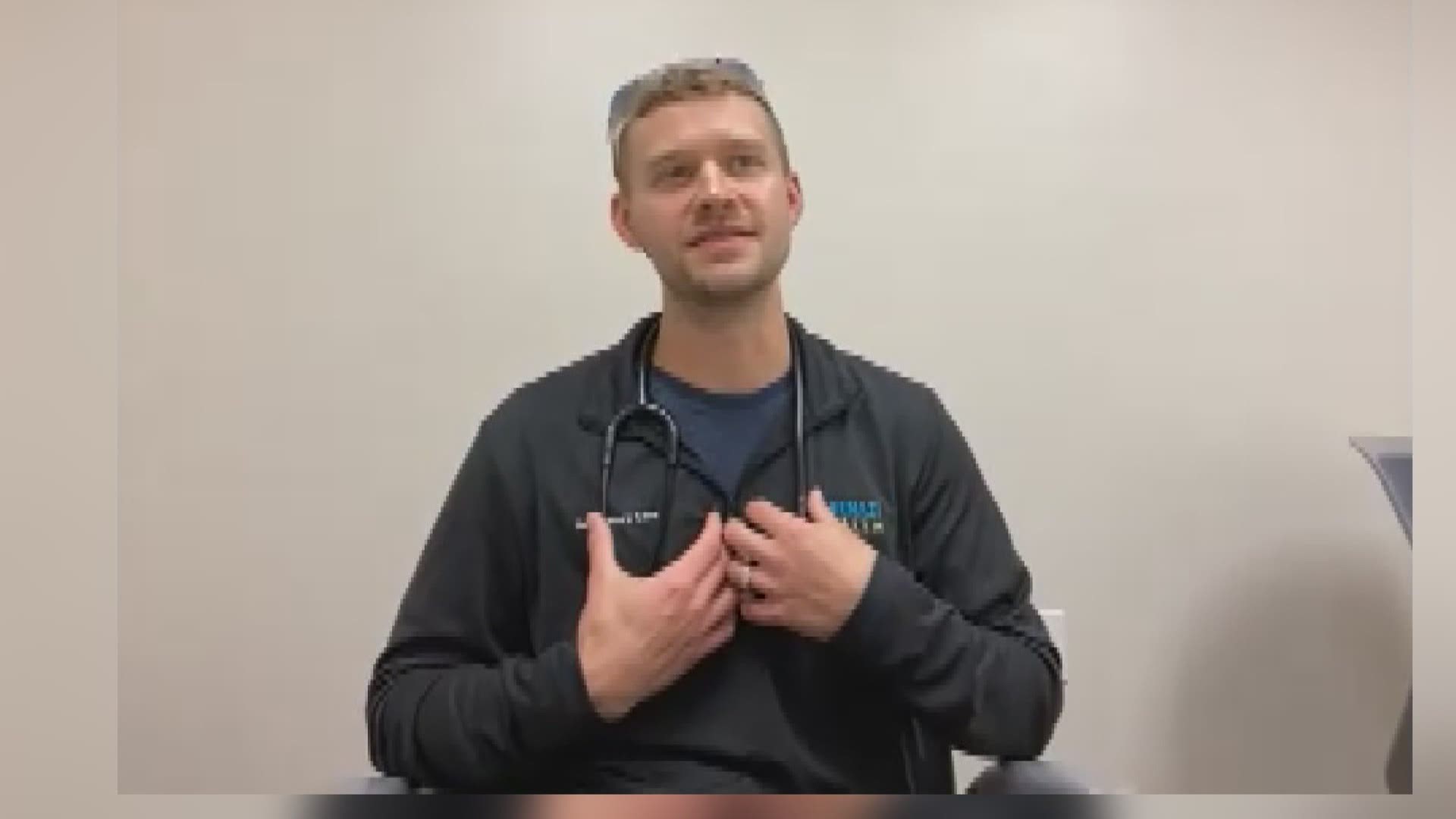 INDIANAPOLIS — Frontline workers will tell you; this pandemic is far from over.

“Right now, in the last week or two, our number of patients requiring a ventilator are going up. I can’t deny it,” said Eskenazi Health respiratory therapist Ryan Spartz. “We’re having to turn another part into an ICU and fill that also. We’re fully expecting to take on more (patients).”

Although we’re in another peak of the pandemic, Spartz said nothing compares to what we saw in March, April and May. That's when he intubated Eskenazi’s first few known COVID-19 positive patients.

“It was nerve wracking," he said.

Spartz, who has a one-year-old, said coming home this spring had him asking himself some hard questions.

“’Is it OK for me to hold her?’ Because after a long day of dealing with this stuff you just want to go home and see your kids. But I didn’t even know if that was appropriate at the time. It really started to wear on me for sure,” he said.

As a frontline worker, Spartz has seen the havoc COVID-19 can wreak on a person’s body.

“Seeing people that are near my age, that there’s nothing else wrong with them, and they’re needing to be on the ventilator. That was scary,” Spartz said.

When it comes to comparison, Spartz said COVID-19 is definitely not the flu.

“The amount of oxygen in their blood is just astonishing low. The flu doesn’t do that. I’ve worked in hospitals for numerous flu seasons. The flu doesn’t do that to people’s lungs,” he said. “We had just never seen an otherwise healthy person not be able to get oxygen into their body. It was astounding. We had to prone patients which we rarely did before."

Proning is a position which requires physically flipping patients onto their stomach in an effort to improve oxygenation.

“I never thought I would have to wear this big hood thing (PAPR hood) with the air filter attached on my back,” Spartz said.

He said the policy of isolating patients and not allowing visitors also took a mental toll on providers.

“These patients are lying there, and they might die, and their families can’t come in and say goodbye to them. It was an emotional roller coaster, for sure,” he said. “It was all just kind of an ominous feeling. It was a weird feeling in the hospital…I’ve worked in health care for over ten years, and I’ve never seen the hospital almost shut down like that.”

He told 13News he began questioning his career.

“When things got bad initially (in the spring) I can’t really compare that feeling to anything else. There was so much unknown. It was overwhelming. Almost like a panic attack. Anxiety for sure,” Spartz said. “We almost had all of our normal ventilators used up. A typical workday for someone in the ICU is maybe three to six ventilators normally. There were days (in the spring) where multiple therapists had at least 12 ventilators.”

He said the initial anxiety he felt in the spring has subsided as the world learned more about how SARS-CoV-2 is transmitted, and how to treat the disease it causes, COVID-19.

He said that although during the summer months he felt the pandemic became more manageable, he doesn't see it going away anytime soon.

And seeing what he and his colleagues see every day on the frontlines makes the comments from people who believe the pandemic isn’t real or that it’s over, that much more frustrating.

“I even got off social media,” Spartz said. “Because I think people are massively uninformed about what’s really going on in our ICU, let alone the other areas of our hospital that we had to turn into an ICU."

He said that amid all the sacrifice, he loves being a respiratory therapist because he finds it very rewarding. That the best part are the moments where he sees that he can make a difference.

This pandemic has most certainly impacted life for us all. For Spartz, it’s taught him to learn to appreciate the days when it’s a little slower. The days when he can talk to patients a little more instead of running room to room.

"It just taught me to appreciate the little things," Spartz said.