Anderson schools quarantine more than 100 students because of COVID cases

Anderson is "mask optional" this year, meaning masks are encouraged but not required. 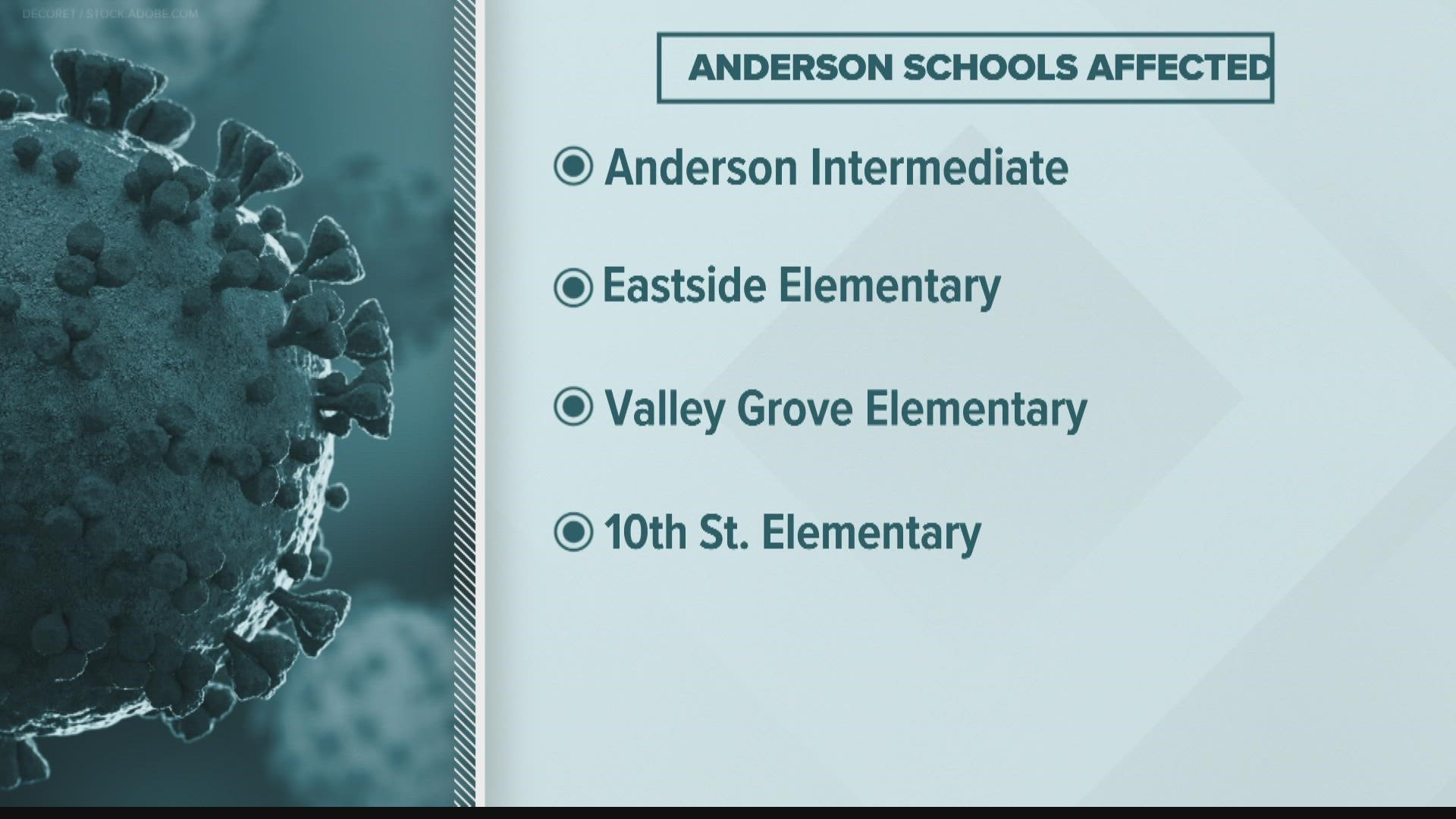 ANDERSON, Ind. — There's already a surge in COVID cases less than a week into the school year in Anderson.

The district started back to class last Wednesday, and by Monday, had to quarantine six classrooms in four different schools because students may have been exposed to COVID-19.

Less than a week into third grade, and Wyatt Garrett is already back home.

His whole class at Eastside Elementary is quarantined because of exposure to a COVID-19 positive student. His mom got the call Monday morning to pick him up from school, go home and get him tested.

"They said Wyatt had been potentially exposed in his classroom as of the first day of school last week and that he needs to quarantine for ten days," Taylor Garrett said.

He's not alone. Lots of parents in Anderson got the same message.

Anderson Community Schools learned about the first positive case on Friday. Then five more classrooms got quarantined on Monday.

Affected students will go to virtual learning during quarantine.

"I feel like on the fourth day of school, and you're quarantining six separate classrooms, that should be a red flag," Garrett said.

Brad Meadows, Anderson Community Schools' director for district and community engagement, said some high school students are under quarantine, too, after positive cases and contact tracing at Anderson High School.

"This is the same plan we put in place in February when we came back to school, to ensure that if there is a positive case, that we're doing all we can to ensure that it's not being spread," Meadows said. "At the elementary, we quarantine the entire class, because they're in that class all day and we're able to keep the teacher and transition to virtual learning and so there's some good continuity there. We do have had some other positive cases at the high school. Since they're not in the same class every day, we're doing contact tracing and making sure the folks who are in close contact are also being quarantined in addition to the students that tested positive."

Anderson is "mask optional" this year, meaning masks are encouraged but not required. School leaders say even with the spike in cases, there's no plan yet to change that.

But some parents say a surge in cases so early is cause for concern.

"This is the fourth day of school and he's being sent home. It just makes me feel a little more nervous about the no mask situation. I think that we kind of removed that a little too soon. I think that students and staff should still be wearing masks in the classroom, I don't think it should be an optional decision there," Garrett said.

"I think it's something that we're looking at," Meadows said. "At this time we're not going in that direction but it doesn't mean that, you know, down the line we couldn't consider something like that."

Meanwhile, more than 100 kids, including Garrett's son, will spend the next ten days at home.

"I'd rather send my kid in a mask than have this happen," Garrett said.

Anderson Schools would not share the total number of positive cases right now, saying that will come out on their dashboard on Friday. Last Friday, they had 11 positive cases, just a few days into the school year.

"I'd say the numbers are pretty consistent with what we saw last year when we returned and again you know the number of cases is still relatively low," Meadows said.

School leaders also have a message for families, to keep everyone safe and healthy.

"If you've got a child that's been that's not feeling well, make sure to keep them home," Meadows said. "If it's COVID-like symptoms, get tested."