A program called "School On Wheels" is helping parents get what their children need to keep up with their classwork online. 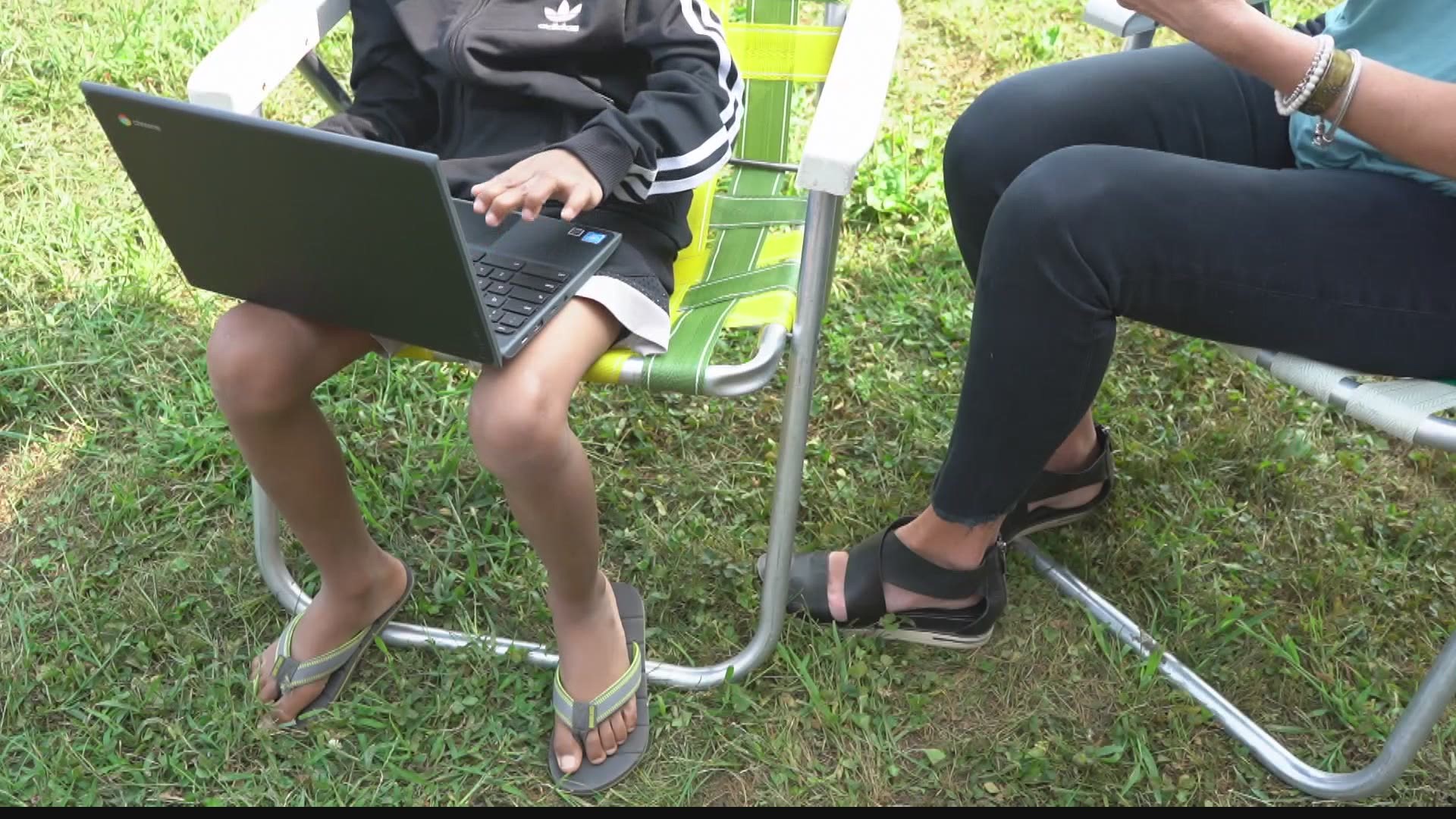 INDIANAPOLIS — (Note: The names of the mother and son in this story have been changed to protect their identities.)

Many kids would agree with Neal Long that e-learning “feels weird. I’m not used to having my face in a screen all the time.”

But for many families, it’s not about the differences, it’s about the hardships. The economic impact of this pandemic has meant uncertainty for many parents, uncertainty about where their next meal is coming from, uncertainty regarding job security and, for the majority of Americans living paycheck to paycheck, that can easily become uncertainty over housing.

T. Long was working in security and was finally getting back on her feet when the pandemic hit. She had a steady job and had saved up enough for an apartment while staying at a friend’s house. But then the schools closed.

Child care “was not a barrier until schools closed. And then daycares closed down and people didn’t even want to watch your kids in their home at that point,” she said.

Without childcare, T. lost her job and soon found herself in a housing crisis.

At first she lived in her car, but she was not about to let her son’s education take a back seat.

“I didn’t want, after this is over and we try to adjust to normalcy, to also have the added pressure of trying to catch up in school when you were way ahead of the curve,” said Long.

Her son is a third grader and reads above his grade level. Neal’s favorite subject used to be math and now he loves reading. His curiosity is unquenchable. After hearing the adage that cats have nine lives, he googled and read that in fact cats only have one life, but are quite agile.

At the end of his second grade year when the pandemic initially hit Indiana, the school provided all students with Chromebooks. But finding an internet connection was another issue.

“I didn’t have the money to pay my phone bill and have a hotspot for him, so we would have to look for places where I could find free internet, and drive up to a parking lot, or a friend's house who I knew. We were pulling up to restaurants,” said T.

Like many families going through a housing crisis, T. ended up going to a hotel.

“Being in a hotel made it easier to do e-learning because of the internet. (But) staying in a hotel had a daily bill over my head and zero income. I had to hustle and find odd jobs,” said T.

Now in stable housing, T. is working to get back on her feet again, and with the help of a program called "School on Wheels," she was able to get her son what he needed for the new school year.

T. said School On Wheels provided all the basic school supplies she needed, including books, pencils, crayons and paper, but more importantly “they gave time,” she added.

School on Wheels used to be an afterschool tutoring program provided two or three times a week for children in a housing crisis. Like any other service or industry, the pandemic has disrupted the way things once were. Now, School on Wheels serves families in whatever way is best.

“Every family situation is so unique,” said Karen Routt, the education director of school-based services for School on Wheels. "For example, a mom contacted me recently that they didn’t have any sharpened pencils. So I dropped off a pencil sharpener. It may seem like a little thing, but it was stopping the kids from getting their work done."

“Now, it’s sitting sometimes with mom and the student to explain a certain math problem so that they can be that at-home teacher,” said Routt.

For students spending most of their day learning through a screen, it’s also about a weekly one-on-one human interaction and connection with an educator invested in their success.

“It’s easier when I have someone helping me,” said Neal. “(Karen) teaches me about things I don’t know."

School on Wheels offers tutoring sessions both virtually or in person. In-person sessions are held outside because of the pandemic. The program is not certain how they’ll adjust when the weather becomes too cold for a jacket and blankets to allow for outdoor education. But one thing that’s certain is that demand is up.

“We have more kids this year than in the past because of the displacement some of our families are going through,” said Routt. 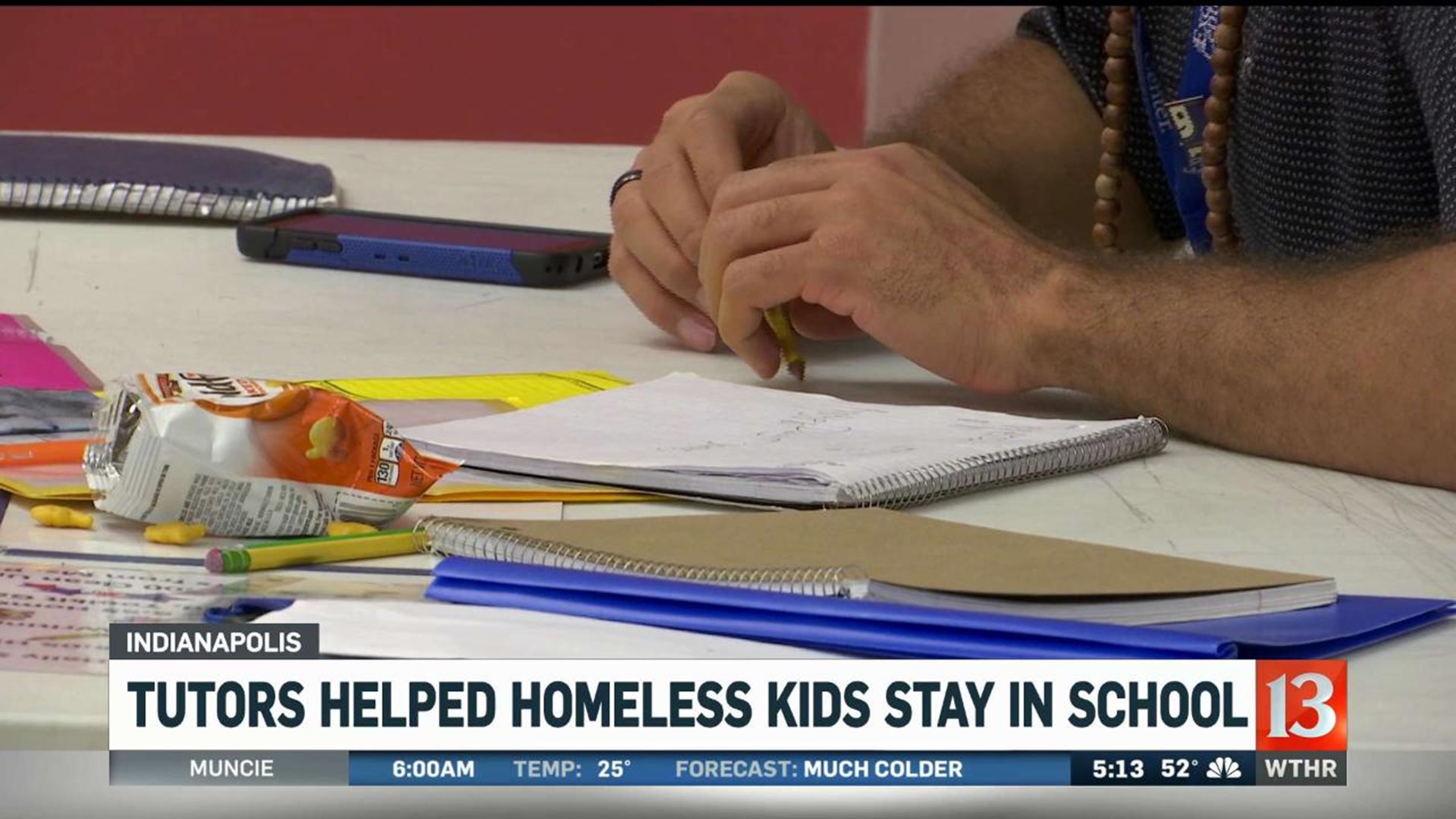 Their in-person tutoring is offered during the daytime. Some of the virtual tutoring sessions are offered in the evening. That flexibility is important for many families, especially since e-learning isn’t as flexible this school year as it was at the end of the 2019-2020 school year when the pandemic initially hit. T. said for families where internet access is still an obstacle, hard deadlines for every class and assignment are a challenge.

“When we have a certain time limit, or certain time frames to keep up with everything, that’s what makes everything harder,” said T. “I don’t know if I can get on internet right now, maybe I can get to it in the evening. So we can still get the work done, but depending on how the school or the teachers have it set up, it can also cause us to fall back because we’re not showing up at the desired time."

School on Wheels said they have connected families with lower-cost internet providers to help circumvent this issue. Like many things in 2020, navigating the distant future is unchartered territory, but School On Wheels is committed to making sure Indianapolis children living below the poverty line do not fall behind in their school work, especially due to the adjustments and shifts caused by e-learning.