Muncie police say they have stopped a student with a gun near Muncie Central High School. 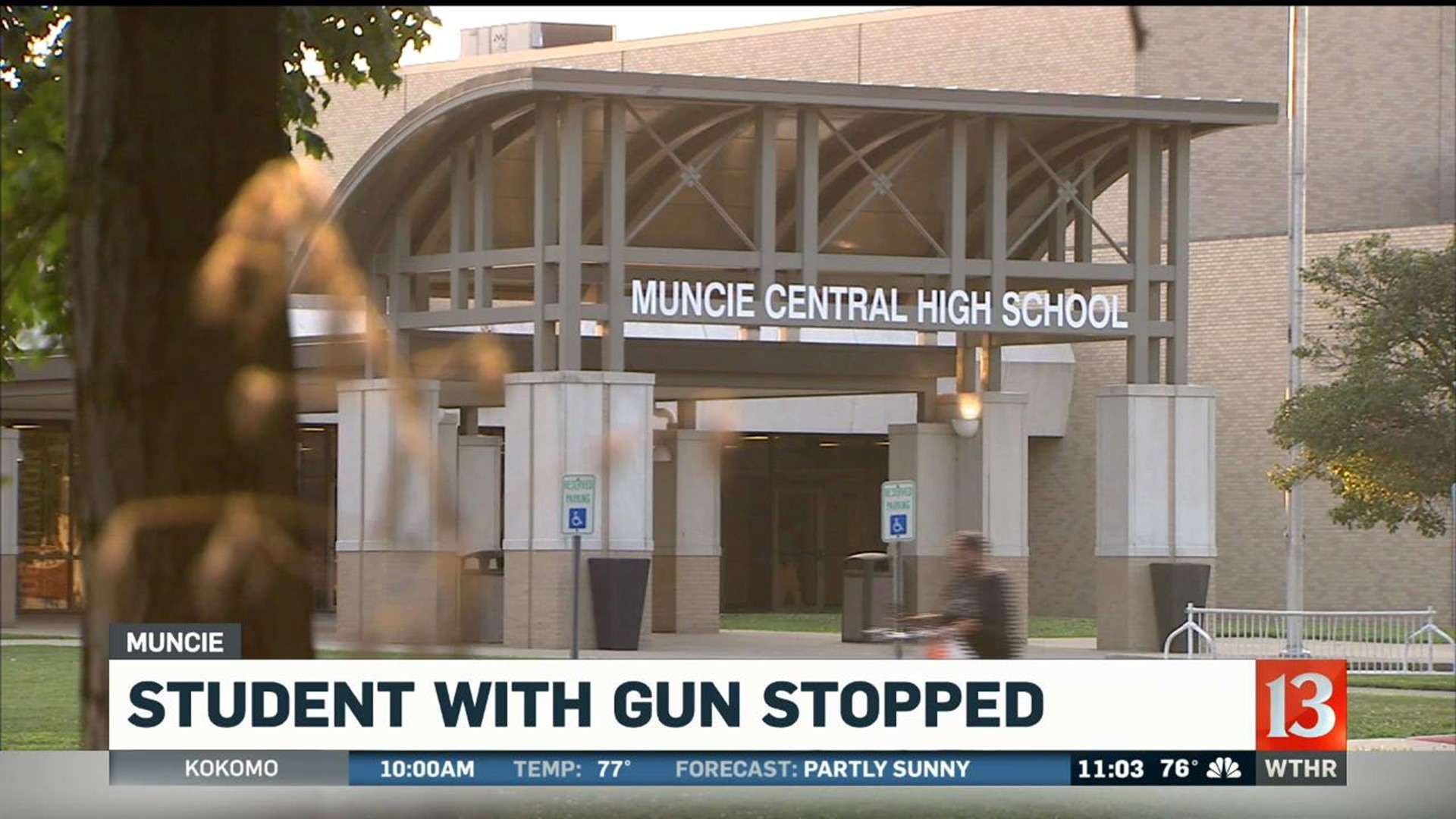 MUNCIE, Ind. (WTHR) — Muncie police say they have stopped a student with a gun near Muncie Central High School.

Police say a school resource officer was tipped off that a 15-year-old student at the school had left earlier in the day and was planning to return with a gun. Officers responded and found the student at the intersection of Walnut Street and Myrtle Avenue right next to the school around 2:30 p.m.

"The school resource officer had dealt with him earlier in the day, but it was minor, nothing alarming," Muncie Police Department Ofc. Chase Winkle said of the earlier incident.

Within three minutes of the tip coming in, two officers stopped that student across the street from the school.

According to Winkle, the student put up a brief struggle before they arrested him just a few hundred feet away from the school's front door. Police say that struggle happened when the student refused to show one of his hands.

Police confirm they did find a loaded handgun on the student, but say it is not yet clear what the student's intention was or where he got the gun from. Police say the school was never put on lockdown after the tip was received.

"I was told from the school it was not put on lockdown, given the fact this literally unfolded within minutes," said Winkle.

Muncie Community Schools released a statement on the incident:

This afternoon, a Central High School security officer received a tip that a student was armed outside of the building and the Muncie Police Department (MPD) was immediately contacted. Central High School security officers acted promptly to assist MPD. The individual was in custody minutes after the call was received. All students were safe and dismissed at their normal time.

School will be open as usual on Thursday and police say they will provide extra officers.

Still, the 14-year-old has grown up in a world of school shooting drills in the wake of it.

"I do be prepared sometimes. I panic a little, but then slowly calm down and think, 'OK, everything will be fine,'" said Hardy.

Wednesday afternoon, Muncie Police credit a tip as the reason Hardy never even realized her 15-year-old classmate was outside her high school with a loaded gun.

"I don't have anything to release today that says there was going to be a school shooting today. I think the fact we know for sure there was a student and that he had a handgun is not a good sign," said Winkle.

"We didn't really know anything," said Hardy. "It was a normal school day. Nothing really major happened."

Dulaney got a text from the school a few hours later.

"My heart fell to my knees. I immediately got an upset stomach," she said.

Her neighbor also didn't realize what happened almost right in her front yard.

"When I was a kid, we didn't have to deal with these things and now our grandkids do," said Reva Bayles.

Addison Hardy's used to it.

"You can't really control anything with people's minds and thoughts," the teenager said.

Her grandmother though, not so much.

"I wish we didn't have to worry about it," said Dulaney.

Muncie Police say investigators questioned the 15-year-old student and took him to the Youth Detention Facility.

No word on what charges he could face.