A State Police sergeant suffered a bite to the arm and a cut on his head after approaching a woman suspected of theft in a Walmart parking lot in Connersville. 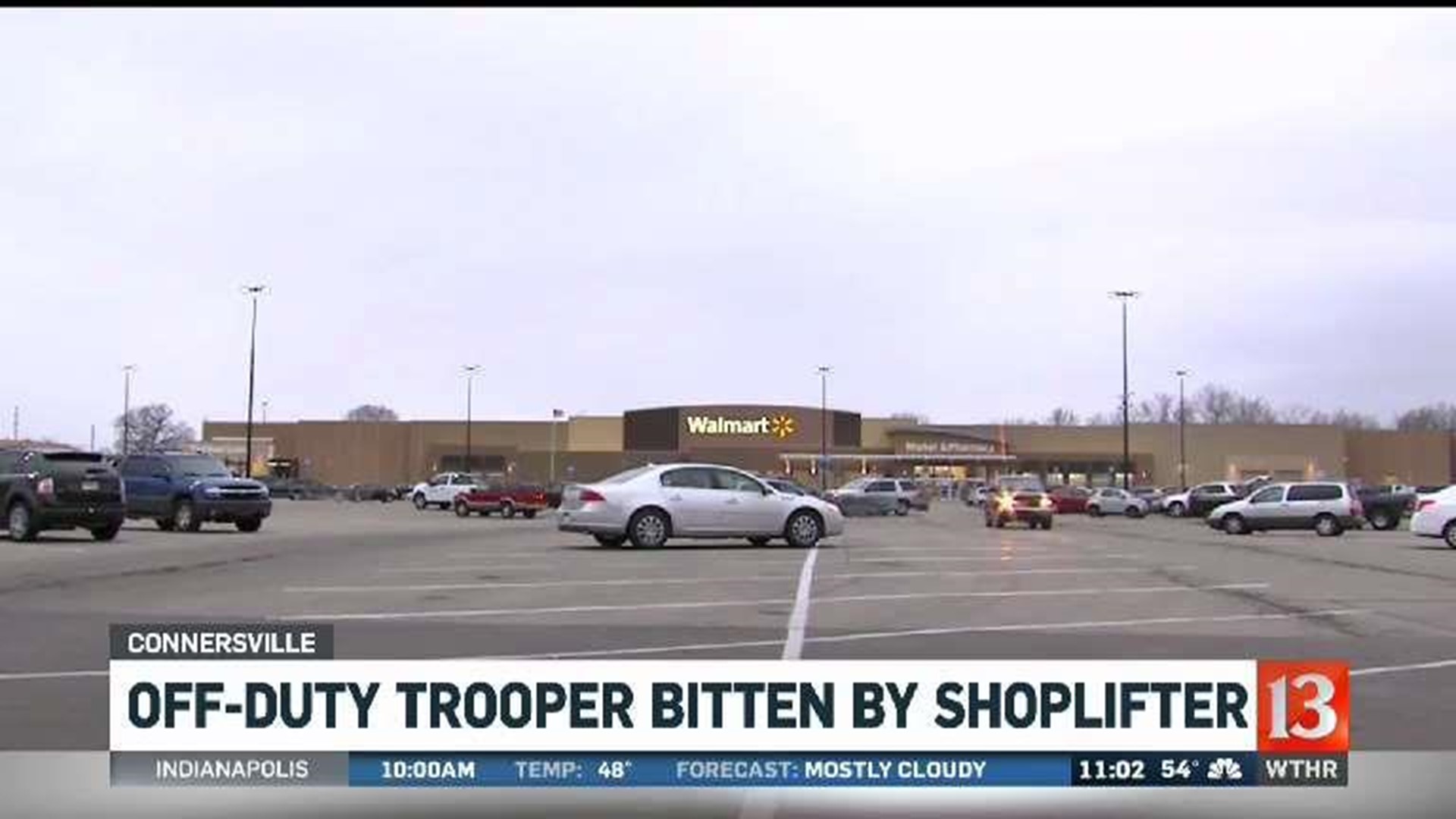 CONNERSVILLE, Ind. (WTHR) – What happened at the Connersville Walmart Monday morning was another clash that shows shoplifting’s serious side.

Indiana State Police Sergeant Brian Metcalfe was shopping off duty at a Walmart in Connersville around 9 a.m. when ISP says he noticed an “employee shouted and pointed at a woman walking across the lot saying she had stolen some items and struggled with employees when they confronted her.”

State Police Sgt. Metcalfe went over to talk to the alleged shoplifter and another woman who was in the car with her.

In the attempt to get away, the suspect bit Metacalfe in the arm and drew blood. The suspect also cut the sergeant's head with the handcuffs.

“Oh wow,” said a shopper Monday afternoon. “I believe it. Totally shocked but not surprised with Connersville.“

The other woman then helped Metcalfe take 29-year-old Ashley Goins into custody.

“It’s kind of weird. You’ve got a lot of people out here are just, they’re on. I don’t know why they would do that,” another shopper said.

Authorities later found out that the car Goins had attempted to get away with was reported stolen out of Anderson.

Goins was charged with felony battery on a law enforcement officer and felony possession of a stolen vehicle, in addition to theft and resisting law enforcement.

Goins was booked into the Fayette County Jail.

“It seems to be happening more and more,” said shopper Lee Shaffer.

He’s right. There have been several recent cases of shoplifters that turn violent when confronted. An Indianapolis hardware store employee was attacked and just before Christmas, suspects ran down two witnesses at Greenwood Park Mall as they tried to stop them from getting away in a car.

One of those Greenwood Park witnesses told us that night, “I was afraid somebody was going to pull a gun out.”

They feared for the store employees and witnesses who’d been pepper sprayed and hit by the car.

“The car ran into her and pushed her about 10 to 12 feet with her on the hood before she fell off onto the ground.”

Those suspect’s were then caught by a nearby Greenwood Police Officer.

State police say the suspect in the Connersville Walmart case, briefly got a handcuffed arm free and swung the trooper’s handcuffs around, using them as a weapon. The trooper needed four staples on his scalp.

ISP says it just goes to show “an Indiana State Trooper is never off duty.”