A Roncalli High School faculty member has been charged after a student accused him of battery. 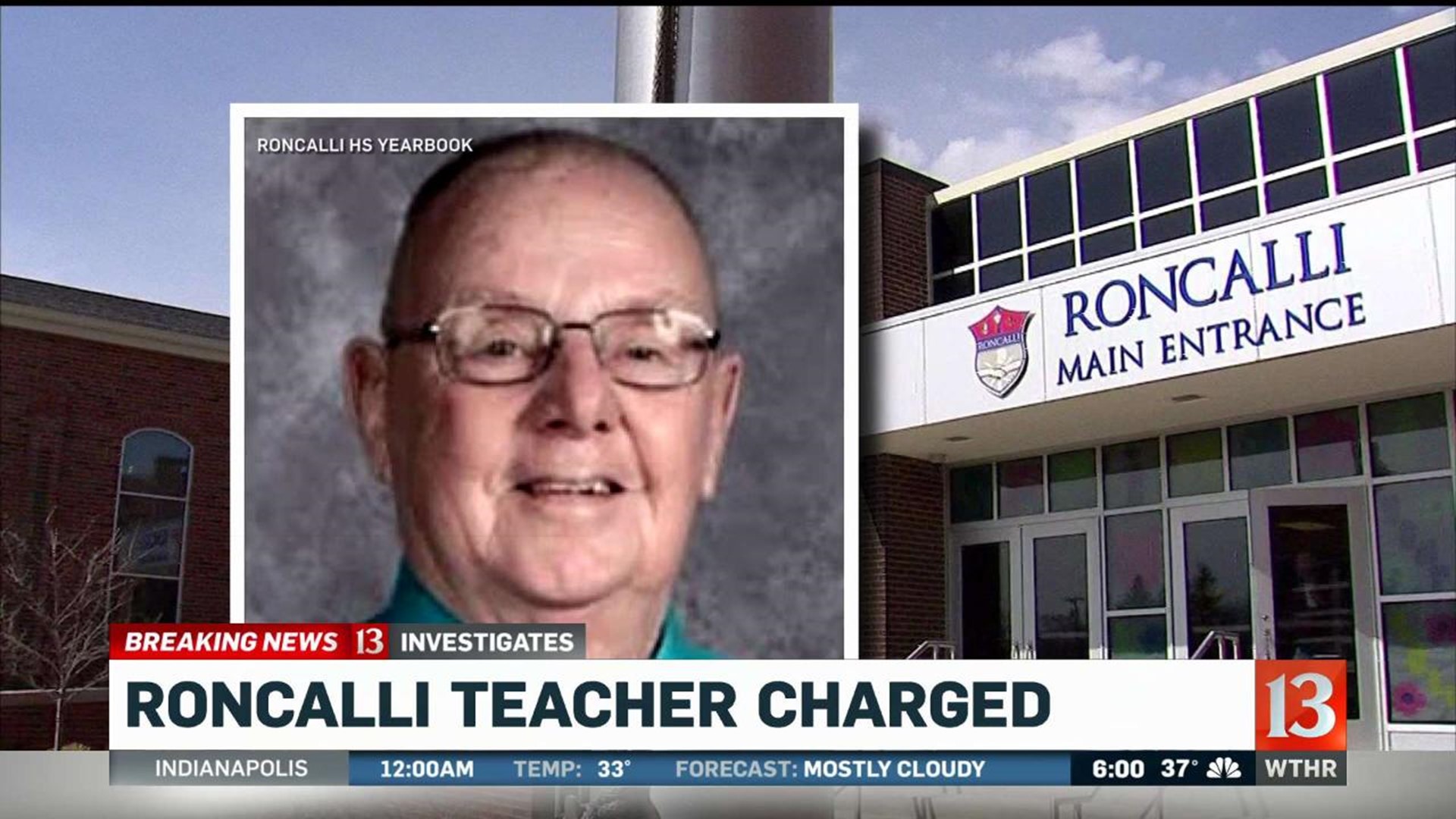 13 Investigates has learned the case stems from a Dec. 6 incident in the Roncalli cafeteria where Tully is accused of putting a student in a choke hold. That student suffered scratches, stiffness and was later diagnosed with a neck sprain, according to his family.

When he first spoke with police, Tully said he put his hands on the student’s shoulders but denied any type of choking action. He is scheduled for an initial court appearance Jan. 10.

This incident marks the second time this fall that IMPD has been called to the south side school to investigate separate cases of alleged abuse involving a student.

Chicken nuggets, mac-n-cheese and a headlock

Roncalli freshman Caleb Krauth met with WTHR to explain what happened on the day of the lunchroom altercation.

He said he had just purchased his lunch and was about to sit down at a table in the cafeteria when one of his classmates accidentally knocked the tray of chicken nuggets and macaroni and cheese onto the floor.

“We talked and agreed that he would clean it up, so I went to get another tray and came back to sit down and eat lunch,” Krauth said. “A few minutes later, that’s’ when Mr. Tully came by and started yelling and screaming about the mess on the floor.”

Krauth said Tully made what appeared to be a joke before approaching and giving him a shove in the back.

“It wasn't a punch, but it was hard enough to hurt. It was pretty aggressive,” Krauth recalled. “As he was walking away, my friend made a joke about the mess, and then we all laughed about it. And that's when Mr. Tully thought I was laughing at him, and as he was walking away, he came back.”

Krauth said he then found himself in what he described as a “firm chokehold,” as the teacher allegedly wrapped his right arm around the student’s neck and used his left arm to lift Krauth backward, with enough force and pressure to lift Krauth several inches out of his seat.

“I didn't resist. I just sat there. I was in shock. I didn't really believe what was going on,” Krauth told 13 Investigates. “During that time, he said something like ‘Is this a joke to you still? Are you still laughing?’ This happened for a good 30 seconds to almost a minute, and that's when I was like not able to breathe. My face was really red. I could not really breathe and that's when he let go.”

Krauth said he and his classmates sat in silence as Tully muttered something and walked away. A few minutes later, classmates encouraged Krauth to report the incident to school administrators. Krauth told WTHR his neck was sore and burning, but it wasn’t the physical pain that prompted him to go the school office to file a complaint.

“I wasn’t treated like a student. There’s definitely ways to handle situations like this and that definitely wasn’t one of them. If another student is in my situation, I wouldn’t want that to happen to them,” he said.

Krauth said he and another student who witnessed the event told Roncalli’s dean of students what had happened. The two boys were quickly separated and asked to write statements.

Unlike previous incidents this fall, in which school administrators waited days and even weeks to contact police and state authorities to report allegations that a Roncalli student with Down Syndrome had been abused by classmates in the school’s football locker room, this time school officials made the calls right away. Within hours of the incident, Roncalli notified IMPD and the Indiana Department of Child Services to report the cafeteria altercation. School officials also notified Krauth’s mother.

“The dean called me and told me that Caleb was assaulted by a faculty member, so I go right to the school and two hours later, he still had red marks on his neck. I was furious,” said Carla Krauth. “He's a good and respectful kid. He did nothing wrong. He did everything right. The dean and principal told us that. We pay good money to send our kid to school, and we expect our kids to be not manhandled.”

When an officer interviewed Tully the day of the incident, Tully said he went to the students’ table to tell them they needed to clean up the mess on the floor, and then he said he walked away. In a court document filed today, the officer says Tully reported that he returned a few minutes later to find the food still on the floor and a student laughing at him. The officer wrote, “Tully said he put his hands on the student’s shoulders and pushed down to keep him from getting up, not knowing what the student was going to do. Tully said that at no time did he do any type of choking action.”

The court document says that in the next few days, investigators met with six other students who were at the table with Krauth. The detectives wrote that all six of the students described Tully’s hold on Krauth as a “choke hold” or described Tully having his arms wrapped around Krauth’s neck.

The detectives also spoke with another adult, Ian Brown, who was on lunchroom duty that day. He told them that he did not see the confrontation between Krauth and Tully, but that one of the students reported being choked by Tully. Brown says he immediately reported the incident to the principal, who was at another table in the cafeteria.

Roncalli decided to place Tully on paid administrative leave while police and DCS investigated. That same night, the school emailed parents to let them know an incident happened in the cafeteria and how school administrators had handled it.

“We ask for prayers for all involved and assure you of our continued commitment to student safety,” wrote principal Chuck Weisenbach. The email did not name Tully, who has had what can only be described as a legendary career at the south side Catholic high school.

More than half a century at Roncalli

Known by many in the school community as “Mr. Roncalli,” Bob Tully is the longest-serving staff member in the school’s history.

According to a magazine published by Roncalli, Tully is now in his 58th year at the high school. During that time, he has served as a religious teacher, campus minister, football and track coach, athletic director, superintendent of finance, development director and bus driver. He is currently listed on the Catholic school’s website as vice president of mission and ministry. This fall, Roncalli renamed its football field “Tully Field at Roncalli Stadium” in honor of his contributions.

“Over the past 50 years, there is no one who has done more for our school and our community than Bob. He is a never-ending source of energy, optimism and love for young people. His passion for the students of Roncalli is unmatched,” the school said while announcing the dedication of the football field.

WTHR spoke with Tully by phone earlier this week. He declined to comment on allegations that he put a student in a chokehold, instead referring 13 Investigates to his attorney, James Voyles. The attorney also declined to comment.

The teacher’s reputation helps explains why Krauth and other students are so surprised by what they saw in the lunchroom on Dec. 6.

“Bob Tully is pretty well-known man. They even named a football field after him, and he’s a likeable person at Roncalli,” Krauth told WTHR. “People were just in disbelief that this was happening.”

This week, 13 Investigates interviewed other students who witnessed the cafeteria incident, and they shared very similar details to what Krauth recalled from the day of the altercation.

“Mr. Tully came over and was angry and basically told the table to act better. When someone made a joke and Caleb laughed, [Tully] came back and put him in a headlock,” said Roncalli ninth grader Kevin Staley, who was sitting two seats away from Krauth during the altercation. “He looked like a mix of angry and serious. He wasn’t joking or kidding around at all.”

“Yeah, Mr. Tully started yelling and screaming at everybody at our table, and then he really got in [Caleb’s] face and put him in a headlock. He was causing a really big scene,” said another student who asked not to be identified for fear of retribution by the school. “I’ve seen him shove students and joke around in a playful way before, but Caleb’s face was bloodshot red and I could tell Mr. Tully was not fooling around. I thought it was very out of his character, and I didn’t think Mr. Tully was capable of doing that. He’s considered to be a friendly, nice guy.”

Staley agreed. He said the headlock, which he recalls lasting between 20 and 30 seconds, caught students off guard.

“I was just really surprised because he’s known as one of the nicest teachers at Roncalli,” he said.

After a doctor at Franciscan Health diagnosed Krauth with a neck sprain, the student said he is now facing a different type of pain. Since reporting the incident, Krauth said he is being bullied on social media by Roncalli classmates and alumni who are angry that police were called to investigate a beloved faculty member.

“Some of the messages are really nasty,” he told WTHR.

“One person told him he is now the most hated kid at Roncalli. This is has literally flipped his life upside down,” said his mother. “I know his safety is at jeopardy if he does go back to Roncalli because of all the threats and harassment he's been getting from the student body.”

“This whole thing is messed up,” said Curt Johnson, an attorney hired by the Krauth family. “It is such a disappointment that you have alumni and kids who are viciously attacking this young man for doing nothing more than being the victim.”

Citing her safety concerns, Carla Krauth has notified Roncalli that Caleb will no longer attend classes there. She plans to enroll him in a different school in January, putting Caleb’s dreams of playing varsity baseball at Roncalli and graduating from the school on hold.

Krauth said he is still in disbelief that those dreams changed so suddenly and does not understand what prompted Tully to place his arm around his throat.

“I just want to ask him ‘Why? Why?’ he said. “There's definitely ways to handle situations like this, and that definitely wasn't one of them.”

Late Friday, Roncalli High School and the Archdiocese of Indianapolis issued the following statement about the charges:

Roncalli High School and the Archdiocese of Indianapolis were made aware today that Bob Tully, Roncalli’s vice president for mission and ministry, was charged with battery stemming from an incident involving a student in the school’s cafeteria on December 6.

Immediately following the incident, the school called the student’s parents and the police, and a report was made by the school to the Indiana Department of Child Services. The police met at the school on December 6 with the individuals involved. The student required no medical attention. Roncalli cooperated with the police and DCS throughout their investigation.

Roncalli notified all school parents of the incident on December 6.

Mr. Tully has been on administrative leave since December 6 and will remain on leave while the criminal proceedings continue. Following the conclusion of the case further action may be taken.

The safety and well-being of every student is of utmost importance to us, and we are committed to continuously seeking ways to improve practices and procedures related to student safety. We ask for prayers for all involved and assure you of Roncalli’s continued commitment to student safety.