Police: Man that struck, killed Colts player and another man was in U.S. illegally

State police say the driver of a truck that struck and killed two people on Interstate 70 is in the United States illegally. 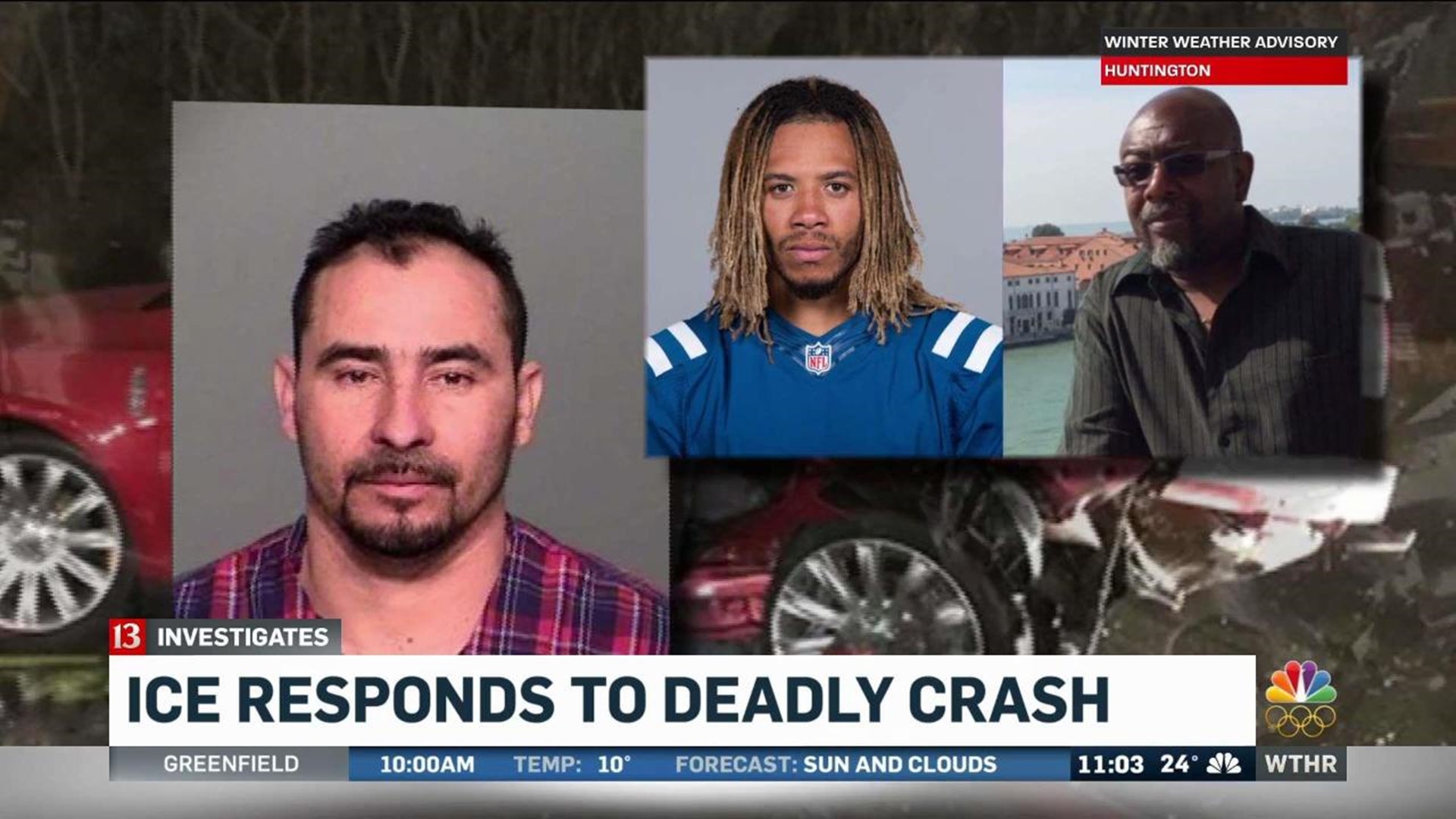 INDIANAPOLIS (WTHR) - Indiana State Police say the man accused of hitting and killing a Colts player and an Uber driver along Interstate 70 over the weekend was extremely intoxicated, had no driver's license and was in the country illegally after two previous deportations.

Manuel Orrego-Savala, 37, faces four preliminary felony charges and is being held on a $40,000 bond in the Marion County Jail. ICE has a hold on him, as well.

Indiana State Police say early Sunday morning, Orrego-Savala crashed a pick-up truck into two men stopped on in the emergency shoulder on I-70. Jeffrey Monroe, an Uber driver, and 26-year-old Edwin Jackson, who played for the Indianapolis Colts, died in the collision.

Police say Monroe had pulled his vehicle over to help Jackson, who was sick. Both men got out of the vehicle and were struck by the pick-up.

Investigators say Orrego-Savala ran from the scene of Sunday's crash.

When troopers caught him on a highway ramp, court documents say a portable breath test showed the 37-year-old had a blood alcohol level of .239, nearly three times the legal limit of .08. A blood draw was taken at the scene, as well, the results of which won't be back for at least a week.

"Somebody made the decision to get behind the wheel of a vehicle after drinking and now you have two families and a lot of people that are forever affected by that decision and it's so, so simply avoidable," said Indiana State Police Sgt. John Perrine.

Monday evening, Vice President Mike Pence tweeted that the crash "was a senseless and avoidable tragedy."

On my way to Alaska. I was very saddened to hear of the passing of Indianapolis @Colts linebacker Edwin Jackson. This was a senseless & avoidable tragedy. This is a great loss for the entire Indiana community. My prayers are with his family in their time of grief. https://t.co/JKkzxakfmE

"This is a great loss for the entire Indiana community. My prayers are with his family in their time of grief," he wrote.

Pence wasn't the first politician to weigh in on the matter.

Republican Congressman Todd Rokita released a statement on Monday, saying all Hoosiers should be sad and angry about what happened.

The red car driven by Jeffrey Monroe was stuck on I-70 and Monroe killed, along with his passenger, Edwin Jackson, Sunday, February 4, 2018. (Image provided by Indiana State Police)

Immigration officials say Orrego-Savala entered the United States illegally, without inspection, in mid-2004. In 2005, he was convicted for driving under the influence in Redwood City, California and has "many other misdemeanor criminal convictions and arrests in California and Indiana."

His prior deportations came after arrests in San Francisco.

Orrego-Savala gave a fake name to troopers at the crash scene - Alex Cabrera Gonsales - one of several aliases police discovered is linked to several traffic offenses, dating back to that first deportation. It includes a conviction for driving without a license in Boone County that Orrego-Savala pleaded guilty to last fall.

"He's used (the alias) enough to create a paper trail but our investigators, our detectives started looking into it a little bit deeper and discovered that he actually, discovered his real name, his given name and that he's a citizen of Guatamala," Perrine said.

Immigration attorney Sarah Burrow works to help and advocate for immigrants. She calls this case a tragedy.

Eyewitness News asked her how someone could return to the U.S. illegally three different times. She says it's rare and difficult.

"My guess is in this person's situation, he was removed once, reentered the country without documentation, was apprehended and then that first removal was reinstated," Burrow said. "It boils down to a border issue, because once someone's deported, they can certainly attempt to reenter and some are successful and some aren't. It is not easy, actually. Once someone's deported, trying to reenter the country becomes increasingly more difficult. They typically are not eligible for a non-immigrant or immigrant visa unless they go through some sort of lengthy legal process and if they attempt to reenter without documentation and are apprehended, they face very serious criminal consequences and are often just removed right on the spot."

This case obvious stirs up the immigration debate, but Burrow cautions against an extreme reaction. She warns people should not painting all immigrants as criminals because most simply are not.

"This is a situation where restrictionists will jump on the opportunity to depict all immigrants legal or otherwise as criminals and we are fighting day and night to avoid that widespread imagery," Burrow explained. "This is one example. This is one case where we can't and shouldn't associate with the whole."

Faith in Indiana, an advocacy group that promotes inclusion of immigrants, echoed Burrow's concerns in a statement on Monday:

"We are sending our heartfelt condolences to the families of Edwin Jackson and Jeffrey Monroe. While these deaths are tragic and certainly untimely, our focus must be on ending drunk-driving, not making this a political issue. The tragedy here is that this Mr. Jackson and Mr. Monroe lost their lives due to the negligence of someone who decided to drive under the influence. It was a horrible decision and this decision could have been made by anyone, regardless of legal status. What we should not do is minimize the loss of life by politicizing the driver's immigration status. Legal status is not the culprit here; drunk driving is. At this time, the only thing we should be focusing on is supporting and the Jackson and Monroe families; and all families impacted by drunk driving."

Orrego-Savala is in the Marion County Jail on a $40,000 bond. He has not yet been formally charged, but faces four preliminary felonies:

State police say even if he makes bond, Orrego-Savala won't be released to the public. Immigration and Customs Enforcement (ICE) has him on a federal hold.

Fans and teammates shared their condolences over the young player's passing on social media on Sunday.

Just learned about the passing of one of my favorite teammates.. Always happy.. always uplifting.. always humble..he was a true shining light on this earth..Such an incredibly sad day for anybody who has ever been lucky enough to be around or befriend Edwin Jackson.. RIP Ed..damn pic.twitter.com/RxKoA8OQ9j

It breaks my heart to hear the news about my brother & former teammate Edwin Jackson. He was always such a joy to be around, always smiling and always laughing. An absolutely incredible friend. RIP Ed, my thoughts & prayers are forever with you and your family 🙏🏿 pic.twitter.com/TpdE9GBuDE

RIP Big Bro You Will Def Be Missed, Ain't No Life Worth Being Taken Because Of Dumb Decisions!

No photo more perfectly captures who Edwin Jackson was. A passionate player, he loved life and took every opportunity to give back to his family, his friends, his fans, and his community. He put his whole heart into everything he did. And he’ll be in our hearts forever. 💙 #RIP pic.twitter.com/ScmlBJIGGh

I dont want to believe this! One of my favorite people in the world. Always smiling, genuine, upbeat regardless of the circumstances. Taken from us way too soon! Love you bro!

The Colts shared a statement Sunday afternoon shortly after State Police identified Jackson as one of the two people killed:

“We were heartbroken to hear the news of Edwin Jackson’s passing. Edwin was loved by all in the Colts organization. We admired his outgoing personality, competitive spirit and hard-working mentality. He was well-respected among all with whom he crossed paths, and he will be greatly missed in our locker room and throughout our entire organization. We also understand that another person lost his life in the accident, only adding to our sorrow on this day. We are shocked and saddened by this tragedy, and our thoughts and prayers are with the families of both men during this difficult time.”

It is with a heavy heart that we share the loss of one of our own.

Edwin Jackson always brought a smile to our locker room and the community. Our thoughts are with his family and friends during this difficult time.

"It's really sad for our city," said one fan at a downtown bar preparing to watch the Super Bowl. "I feel like it hits close to home, too."

"Indiana for sure holds our sporting teams very close to our heart," he said. "to see a situation like that is always a shame."

Jackson, from Atlanta, was signed as an undrafted free agent by the Colts in 2015 and started eight games in 2016.

Our hearts and prayers are with Edwin Jackson’s family. Terrific young man, respected and liked by all. Rest In Peace, Edwin.