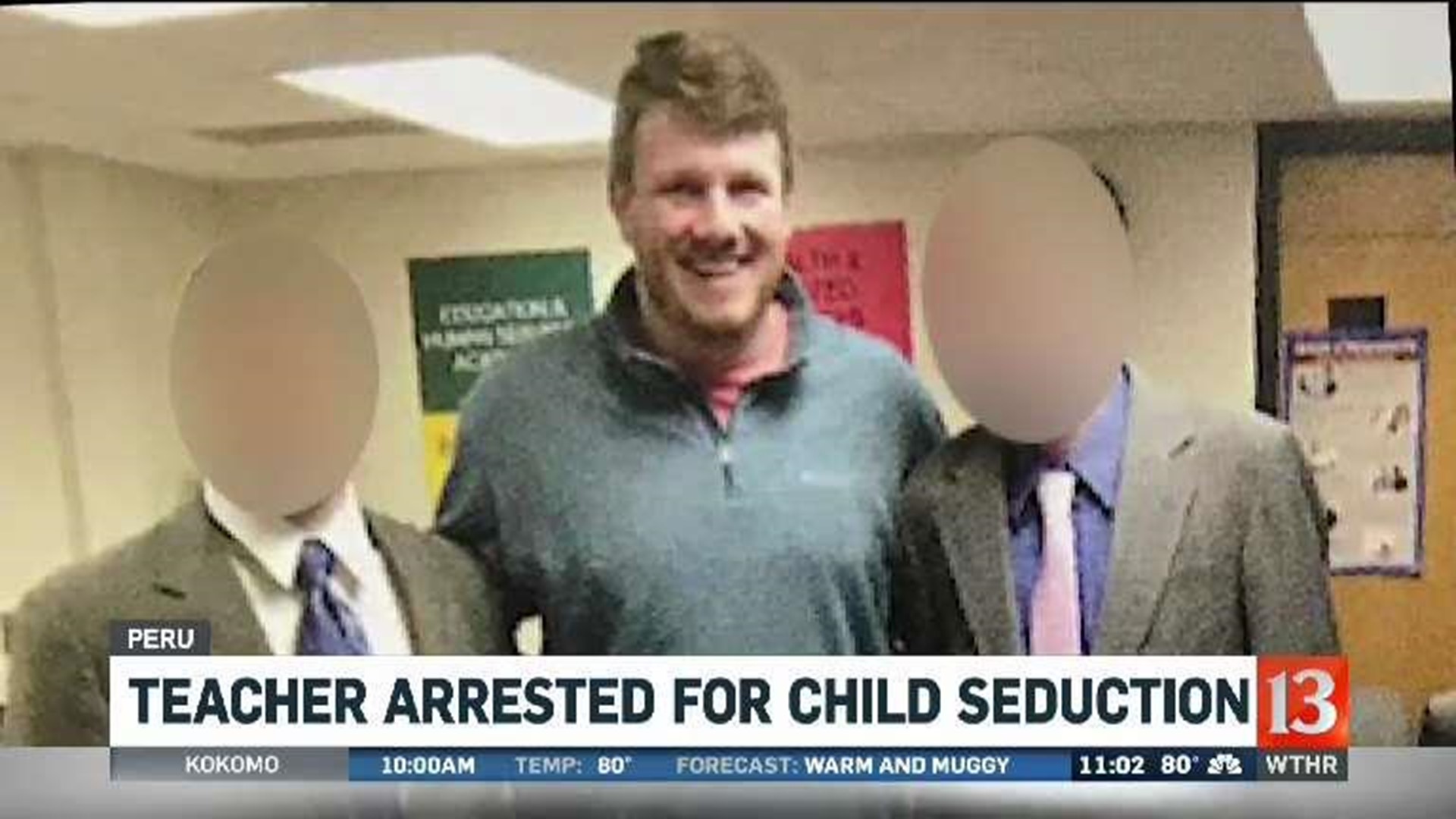 PERU, Ind. (WTHR) — At Peru Junior High School the news that one of their teachers was arrested for child seduction hit hard Tuesday night.

Elizabeth Wolfe, a parent attending a ball game said, "It’s a shock to me for sure. Hard to believe? Yup."

28-your-old teacher Mason Zimmer was arrested for allegedly having sex with a female student.

"Actually the mother contacted us," said Peru Police Chief Michael Meeks. "Let us know there may have been some inappropriate contact between the teacher and her daughter."

Someone else had let the mother know she should start looking into something her daughter was involved in.

"In particular we’re looking at Snapchat," said Chief Meeks. "There were social media outlets that were used." Meeks says photos and videos were sent between Zimmer and the female student.

"At this point we believe yes." Police say they believe the images were of a sexual nature.

Peru Police seized all the cell phones involved and got search warrants to examine them.

Police say they know the contact went on for at least two to three months.

"I thought it was really surprising because I know Mr. Zimmer to be a really nice guy. Good teacher overall. Like I’ve never even heard of him doing anything wrong," said 18-year-old Andrew Overton. "It’s upsetting because I know the whole school is going to suffer because his dad is a teacher at the high school so it’s going to be like a really depressing couple of days couple or weeks."

Overton and his 18-year-old friend once attended Peru Junior High where Zimmer taught until this week.

He was one of the more popular teachers, helping coach football students say.

At the high school two years ago he taught a class that helped students prepare for the job hunt, telling the yearbook: "We do resumes, job applications, cover letters, and many more things to prepare students for the real world."

We asked parents, "How do these things happen?"

Elizabeth Wolfe summed up the way a lot of people viewed Zimmer.

"I don’t know him personally so I wouldn't want to judge him unless I knew the whole story," said a grandmother stopping in at Tuesday’s game.

Paula Guyer says, "Sometimes you hear the stories and if they’re not true it’s ruined his life."

"In our little small town I hope it’s not true."

The school district tells Eyewitness News Zimmer has been suspended with pay and is on administrative leave until the investigation is over.

The superintendent also said, "The staff member in question will not be allowed to interact with students or staff or be allowed on school property or attend any Peru Community Schools events and programs."

“Peru Community Schools is aware and has taking the appropriate steps to ensure the safety and security of all involved.

The staff member in question has been suspended and placed on administrative leave, with pay, until the investigation is complete.

The staff member in question will not be allowed to interact with students or staff, or be allowed on school property, or attend any Peru Community Schools events and programs.

Peru Community Schools is in cooperation and communication with the Peru Police Department regarding this matter.“