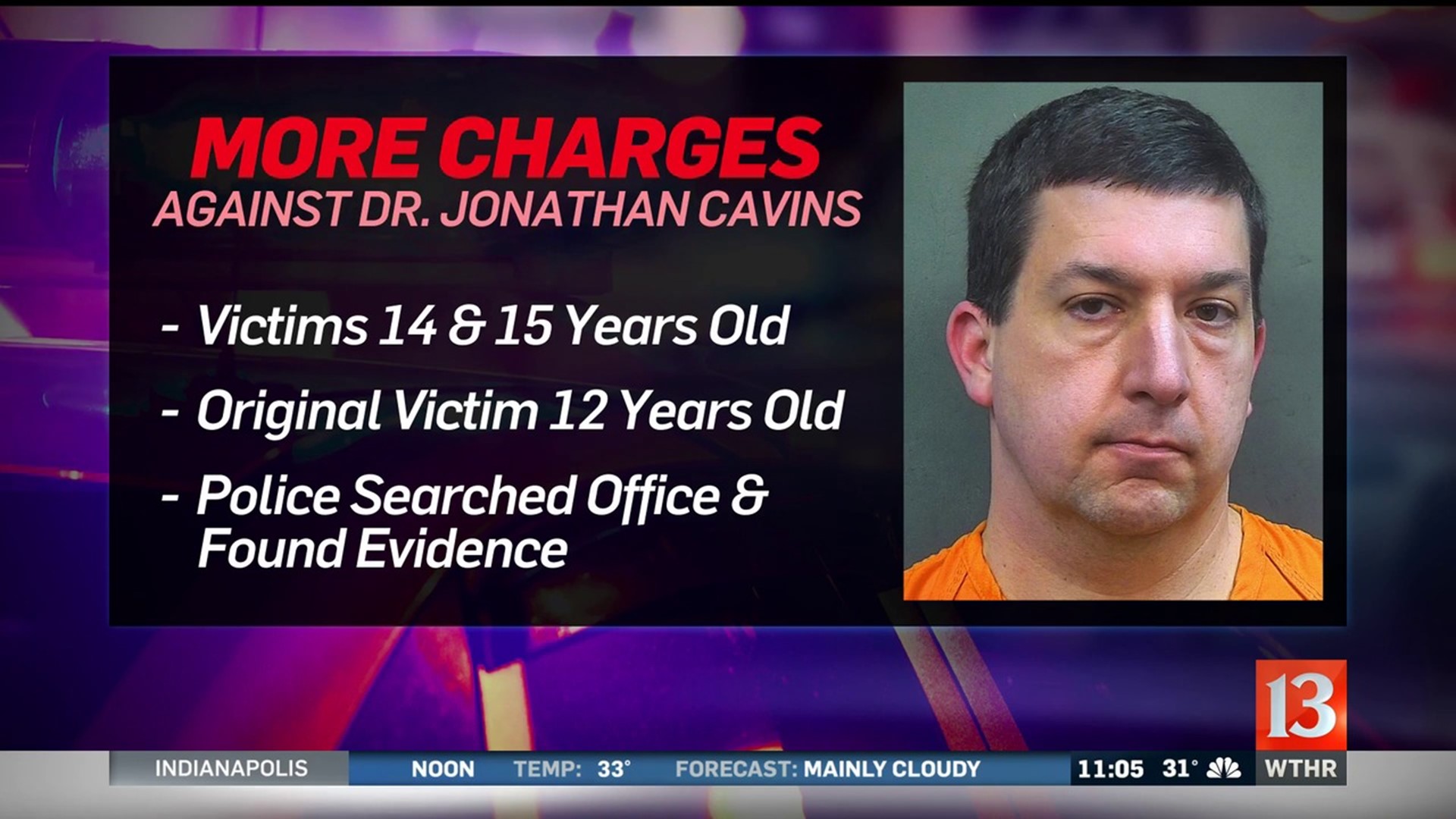 The latest victims were 15 and 14 years old. Those victims' accounts have led to additional charges against Dr. Jonathon W. Cavins who has now lost his position with Witham Health Services. The charges include: two counts of Sexual Misconduct with a Minor, a Level 5 Felony, and one count of Vicarious Sexual Gratification, a Level 5 Felony. Cavins already faced a charge of child molestation, a Level 4 Felony.

A 12-year-old male victim told police on February 7 that, during a physical examination three days earlier, Cavins fondled his genitals.

Detectives searched Dr. Cavins' personal office and the examination room where the incident occurred - both of which are in the Witham Health Services Pediatric suite. They said they found evidence that verified the victim's statement and was not consistent with the routine medical and physical evaluation the victim was supposed to be getting.

According to court papers, it happened February 4th. The boy was in for a routine check-up and school sports physical.

At one point in the exam, the doctor allegedly touched the 12-year-old inappropriately “in ways that could not be construed as a routine medical physical exam.” That’s according to other doctors questioned by police.

The doctor also allegedly asked the boy if he was sexually active. While the patient said he was not, the doctor gave him a wrapped condom anyway.

According to court papers, Dr. Cavins said “no,“ when asked by police if he fondled the boy, and “I don’t know,“ when asked why the boy would claim “he was fondled for an extended period.”

“Very shocked, but at the same time I was like, it’s not really a big surprise,“ said Marlyne Bishop, mother of a former patient. Tara Whiffing, her now 24-year-old daughter, was a Cavins patient for nine years.

“I wouldn’t say inappropriately, but he liked to do a lot of physical exams. Like every doctors appointment, which was strange,” Tara told us Friday.

She says she sometimes at first felt uncomfortable but the doctor made her feel comfortable. “I still think he’s a good doctor, but I think these rumors aren’t rumors. I think it’s true.“

“The vibes I got from him. I don’t know how to say it. He made me feel creeped out," Bishop said.

But there was also much praise for the doctor as a person, who gave hugs, stickers and high-fives, making kids and parents feel good.

“I don’t want to believe it because he’s been a great doctor,” said Michelle Clevenger. A great pediatrician, she says, to both of her boys. Now ages three and five, both were premature births.

She says she would still recommend the doctor to other parents. But she also recommends parents stay in the examining room when their children are being checked.

“Usually, he always has somebody working alongside of him or the nurse is usually present if the parent is not," she said. “To me a 12-year-old still has to be supervised by a parent."

“We are shocked and troubled by the additional allegations of misconduct being made against Dr. Jonathon Cavins. We take this matter very seriously and Dr. Cavins is no longer employed here."

Eyewitness News has also learned that Dr. Cavins was a 5th grade boys' basketball coach at Granville Wells during the winter of 2016-2017. He was also a coach of a 4th grade boys' travel team this past fall.

Administrators with WBCCSC are aware of the charges that have been filed against Dr. Cavins. WBCCSC is not aware of any connection between these allegations and any student or staff member of WBCCSC.

Dr. Cavins will be back in court in April for his pre-trial and right now his trial is set for July.