A boy was injured in a shooting at the Kokomo Beach Family Aquatic Center Tuesday. Witnesses said the facility was mostly full when the shooting happened. 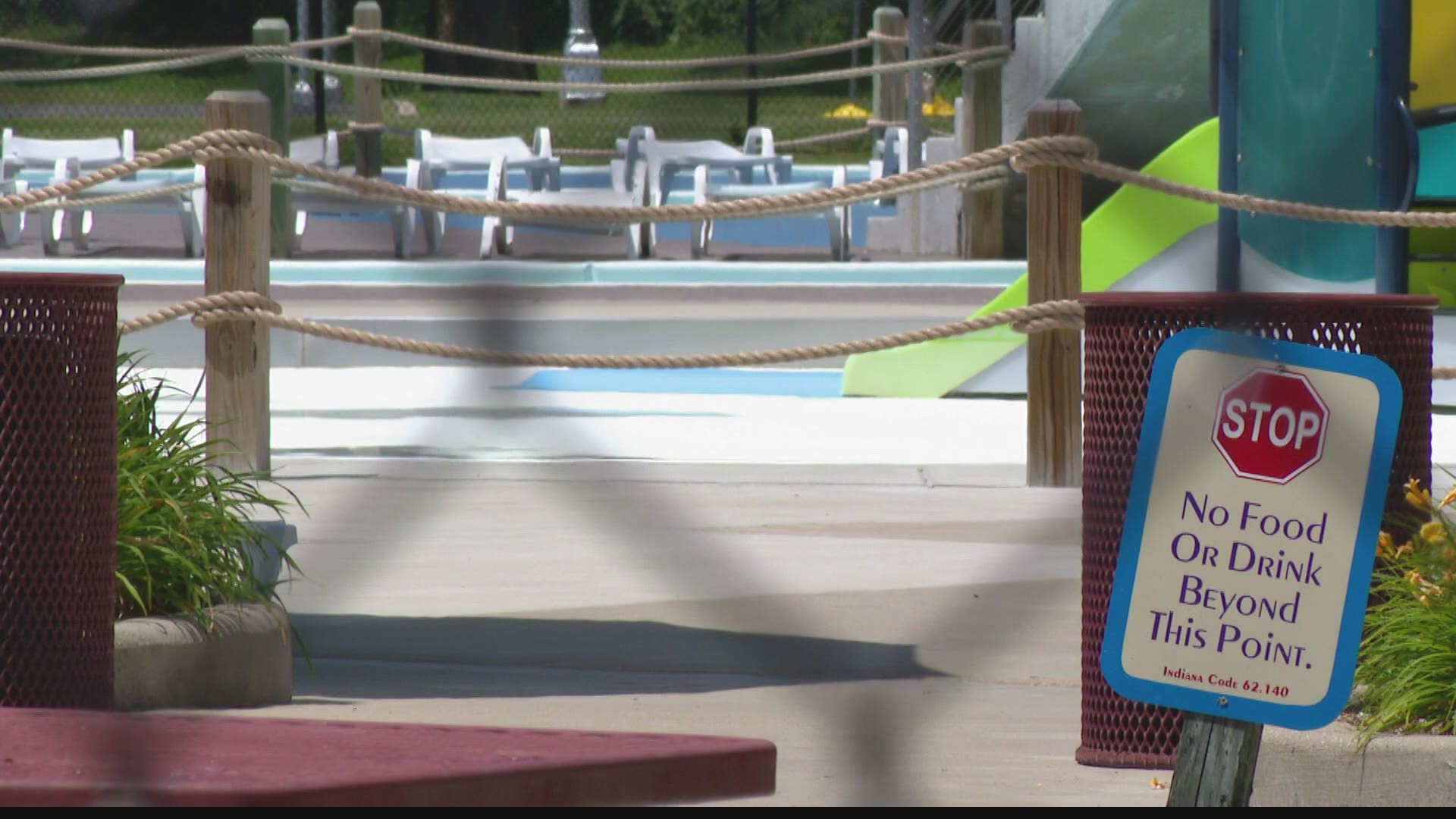 KOKOMO, Ind. — A teen was taken into custody after another teen was shot at Kokomo Beach Family Aquatic Center Tuesday.

Kokomo police officers went to the family aquatic center, located at 802 W. Park Ave., shortly after 5 p.m. for a report of a shooting.

When officers arrived they found a boy suffering from a gunshot wound. The boy was taken to a local hospital, then later flown to Indianapolis for further treatment. Police have not released any further details about his condition.

Deputies from the Howard County Sheriff's Department located another boy leaving the area who had a gun. He was detained and taken to the Kinsey Youth Center for dangerous possession of a firearm and possession of a stolen handgun. Both crimes are felonies.

Police said the victim is 15-years-old and the alleged shooter is 17-years-old.

Credit: Kokomo Tribune/ Tim Bath
Detectives with the Kokomo Police Department are shown in the beach breezeway at Kokomo Beach on Tuesday after one juvenile was shot.

Witnesses to the shooting told WTHR's news partner the Kokomo Tribune that Kokomo Beach was mostly full when the shooting happened, and they described the scene as hectic.

Kokomo resident Brittney Miller was visiting the facility with her two young boys when she heard what she thought were fireworks or a car backfiring until she saw people running.

"It was pure chaos," Miller said. "I just looked up and saw everyone screaming and panicking."

Witnesses told police at least five boys had gotten into a fight shortly before the shooting. Detectives are trying to identify the individuals involved in that fight.

Miller told the Kokomo Tribune that several of the Kokomo Beach employees quickly ushered patrons to safety, and some people also took cover in the dressing room area.

"It was definitely scary," she said. "My one son was at the top of the slide when it happened, and so I ran to get him. My sister was supposed to be here but wasn't, and now she probably won't ever want to come here."

Credit: Kokomo Tribune/ Tim Bath
Officers with the Kokomo Police Department walk into Kokomo Beach on Tuesday after one person was shot in front of the family aquatic center.

"This is our home," Miller added, citing what she feels has been a recent uptick in juvenile-related crime throughout the city. "We just had another one of these shootings recently at Chuck E. Cheese. It's awful when you have to worry about taking your kid anywhere in this city just because you want to try to get them out of the house."

Kokomo Beach remained closed Wednesday, but it's unclear when the water park will reopen.

Kokomo Police Captain Scott Purtee said Wednesday the department is continuing its call for parents to know where their kids are at all times, and help police prevent kids from breaking the law.

"Officers of Kokomo Police Department have noticed a disturbing trend with some of the most recent incidents," Purtee said in a release. "Many times, Officers are not only encountering uncooperative juveniles, but then are dealing with parents who are also uncooperative with the police."

Purtee also said the department and the Howard County Prosecutor's Office are taking a zero-tolerance approach to anyone who participates — in any capacity — in crimes at county parks, trails, or other public facilities.

Kokomo Mayor Tyler Moore said Wednesday there will be a police presence every day the beach is open the remainder of the summer and police will be checking bags as people arrive.