An animal control officer said he only took photos from the owner's porch and driveway to get a search warrant, but a judge found that not to be the case. 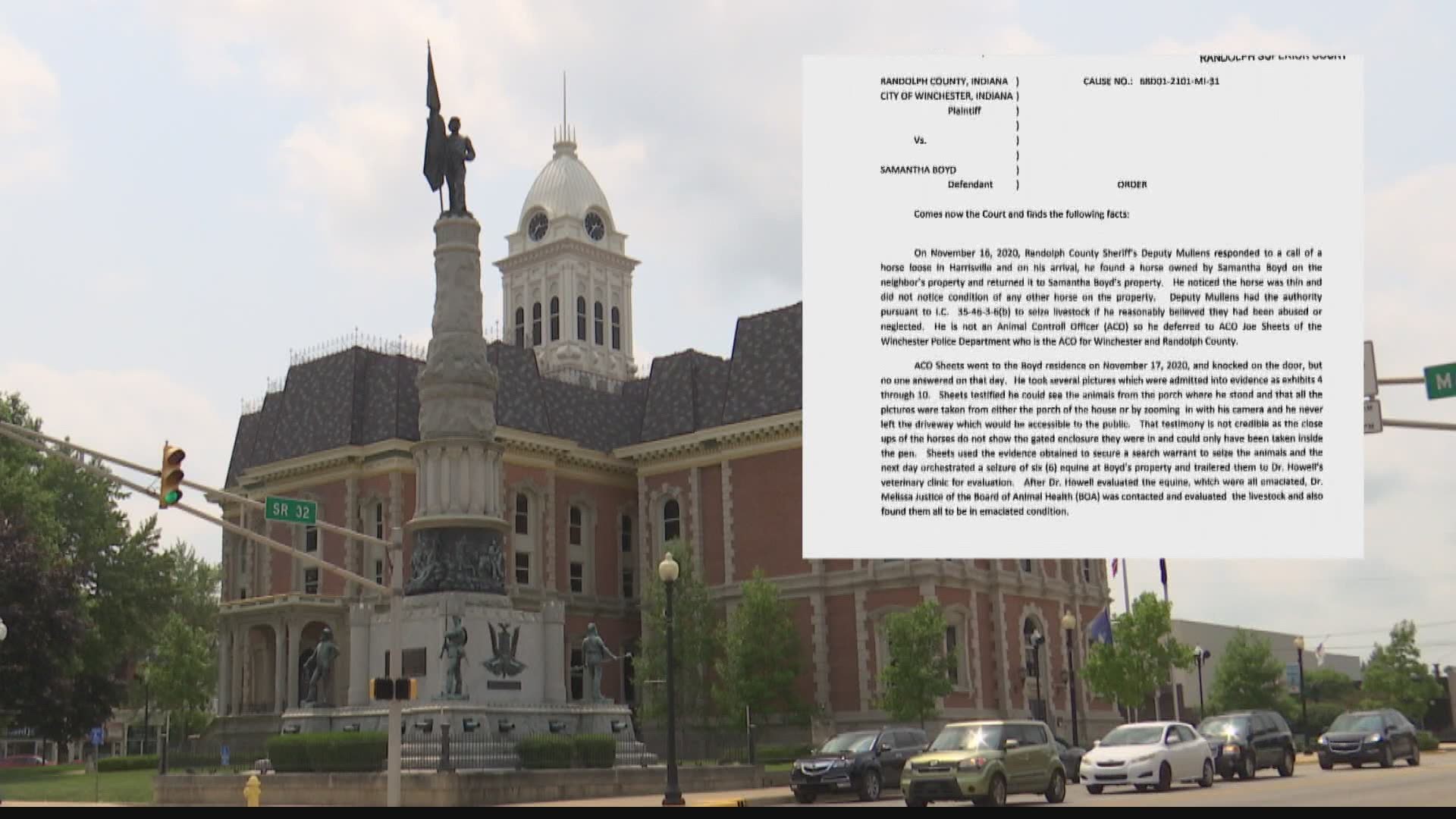 RANDOLPH COUNTY, Ind. — Six emaciated horses seized last November because of their dire health are back with their owner in Randolph County.

A county judge threw out the search warrant and thereby the charges of animal cruelty against Samantha Boyd.

Animal advocates in the community say they're furious with the failure of the system to protect the horses.

Amanda Vonbillian owns the Dare to Dream Stables in Ridgeville. She boards and trains horses and supports the 4-H members competing this week at the Randolph County Fair in Winchester.

Vonbillian helped with the removal and care of the six horses that were seized from the property in Union City in November 2020.

"Freaking horrible, like death warmed over,” is how Vonbillian described the health of the horses at the time. “I doubt they would have made it another two weeks probably. They were crap."

"When I found the horses, it was probably the worst I have ever seen an animal that was still living that was skin and bones,” said Sheets. “I mean it was just heartbreaking."

In November 2020, police were called after one of Boyd's horses got loose. The Randolph County deputy that responded returned the horse and noticed the horse was thin. The deputy called Sheets, who went to Boyd's home the next day. When she didn't answer, Sheets took photos of the horses on the property and submitted them as evidence to seize six horses. Sheets said he took the photos only from Boyd's porch and driveway, but a judge found that not to be the case.

Even though a veterinarian found all of the horses were emaciated and a doctor with the Board of Animal Health found the same, the judge ruled the evidence used to seize the horses was illegally obtained, which means those evaluations are then also inadmissible.

The judge additionally found that Boyd did not get a chance to have a hearing in a reasonable amount of time. Boyd filed for a hearing on Nov. 30, 2020 and it wasn't held until seven months later. As a result, on July 16, the judge ordered the horses be returned to Boyd immediately, and the charges against her were subsequently dropped.

The horses were returned to Boyd Monday. She declined an interview request Wednesday by text with a reply of “don’t contact me again”.

A Go Fund Me fundraiser collected over $17,000 to nurse the horses back to good health. Many of the families competing with their horses at the county fair this week donated money or materials to help save the horses.

"Here we are with nothing to show for it, other than we got them fat and fine,” said Vonbillian. “But yet right now they don't have a happy ending."

Since April, Vonbillian took care of a pony among the seized horses named Beauty. Vonbillian’s four-year-old daughter Harlan quickly became attached to the pony and Amanda expected to adopt Beauty. She said she hated surrendering the pony on Monday.

"It was hard because I could trust her doing anything with (Harlan),” said Vonbillian. “It's the first thing she wants to do in the barn. ‘Where's Beauty at? I want to ride Beauty.’ That little turd never did anything wrong."

Credit: Amanda Vonbillian
4-year-old Harlan Vonbillian with 'Beauty', one of the seized horses nursed back to health.

Sheets says the prosecutor is working on an appeal to reinstate validity of the search warrant.

No horses were in plain view on the property Wednesday.