The warrants involve what law enforcement sources describe as a "major drug-trafficking organization" that involves heroin, meth and cocaine. US attorney Josh Minkler says it was dismantled "top to bottom." 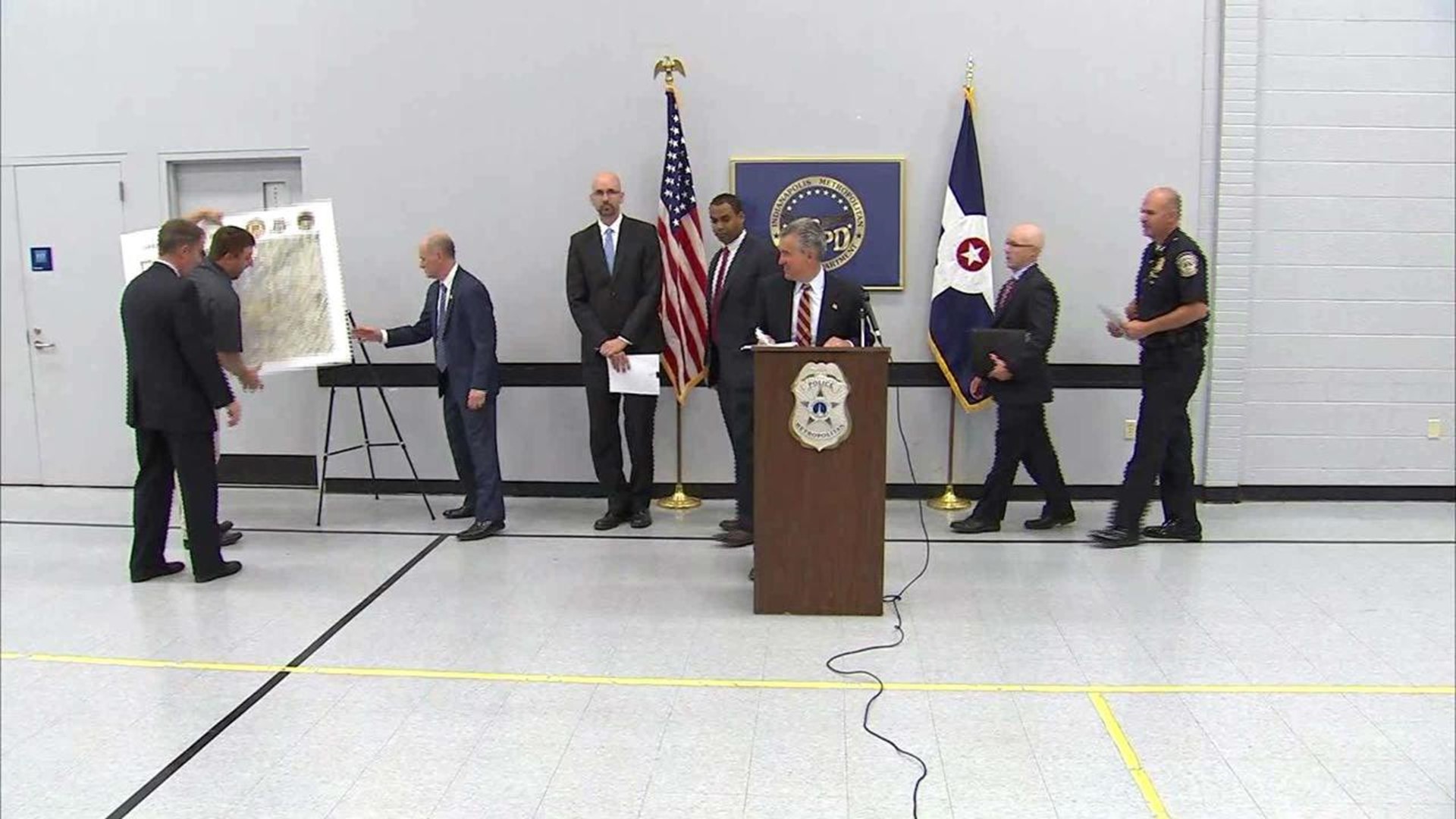 US attorney Josh Minkler says the enterprise was dismantled "top to bottom."

"We are all in. We will do what is necessary to support the reduction of crime and, more importantly, violent crime," Minkler said.

"Operation Glass Houses" started around 6 a.m. with a surprise visit to a house near 53rd Street and Moller Road. Officers rode in a SWAT vehicle, parking it in the front yard of one house, where officers led other family members outside.

Other officers hit the 5700 block of Port Lillian Drive, even searching cars for evidence. During the operation, officers confiscated 94 guns. That find is a relief for Diana Messner.

"We recently had a shooting in our neighborhood, but the individual who shot the gun, we never knew who did it, but yes, that's a real positive," she said.

Officers also hit a southeast side warehouse on Brookville near Kitley. Plus, at a different location on Holt Road, police took another one of their suspects into custody.

Police say "Operation Glass Houses" not only shut down a huge drug operation, but it's the start of keeping the next drug dealer from setting up shop.

"It's our responsibility to keep them from doing that," said IMPD Chief Troy Riggs. "Over time, we continue to do this with that long-term approach, we will see some benefits."

"Perhaps this might send a signal to those who are trying to infiltrate our city and make it a drug haven," Messner said.

Sources say the majority of police activity was in Marion County, as well as one location in Parke County and one in Putnam County.

Chopper 13 located a heavy police presence at at least three locations on Indianapolis' southwest side. Our crews have seen at least one person taken into police custody.

Sources say raids are also taking place at several other location in the western U.S., and they're all tied to Mexico.

The task force conducting the raids in Marion County includes a total of 18 SWAT teams and roughly 700 agents/officers from local, state and federal agencies.

Investigators were seen dusting firearms for fingerprints outside one of the raid locations.

No injuries were reported to either the officers who conducted the raids or those targeted by the sweep.

Many of the suspects in Operation Glass Houses face a minimum of 10 years in federal prison time if convicted of the charges they now face. The case is far from over, as police search for the remain 12 people indicted in the case by a grand jury.

The federally seized cash of about $85,000 will be split among the agencies participating in the drug bust. Authorities could also be in contact with immigration officials about any of the suspects who are in the United States illegally, but will still have to do federal prison time if convicted and possibly face deportation once out of prison.

Residents were pleased to see the efforts to clean up the neighborhood, but they didn't want to go on camera out of fear of retribution. One resident pointed to a home that was raided and said more people come and go from the house than at K-mart.

Some neighbors reported hearing what sounded like gunshots around 7:00 am, then saw a slew of officers in the area. A few said they weren't surprised the raid involved drugs, considering the activity they'd noticed at one of the homes that was targeted.

People who live near Holt Road and Oliver Avenue on the city's southwest side say for the most part, they've felt safe in the old, working class neighborhood, but there have been changes and concerns.

There's also been talk about the what's been going on at one home.

"I just know there's been a lot of traffic, and people moving in and out of there every so often," said Opal Starks.

Josh Shaw, a father of three, said he became aware of the raid driving his kids to school. "As I came around the corner, I saw the state troopers there."

While he wasn't surprised it involved drugs, it scares him.

"I'm concerned if there's a meth lab, cooking up something," he said. "I've always heard about meth explosions and being that close, it's a worry."

He and others said while people in the neighborhood are always looking out for each other, they fear the overall drug problem is getting worse, and it can't help but affect everyone.

"There's a lot more drugs around than when I was growing up...now it's stuff that's killing people," Vicki Snyder said.

Shaw, who works in retail and sees a lot of people every day, said, "I notice it more and more, people looking like they're methed out. I'm not surprised but it's scary."