4 arrested for deadly quadruple shooting on east side

IMPD has arrested four people linked to the shooting that killed four young people on Indy's east side Wednesday, Feb. 5. 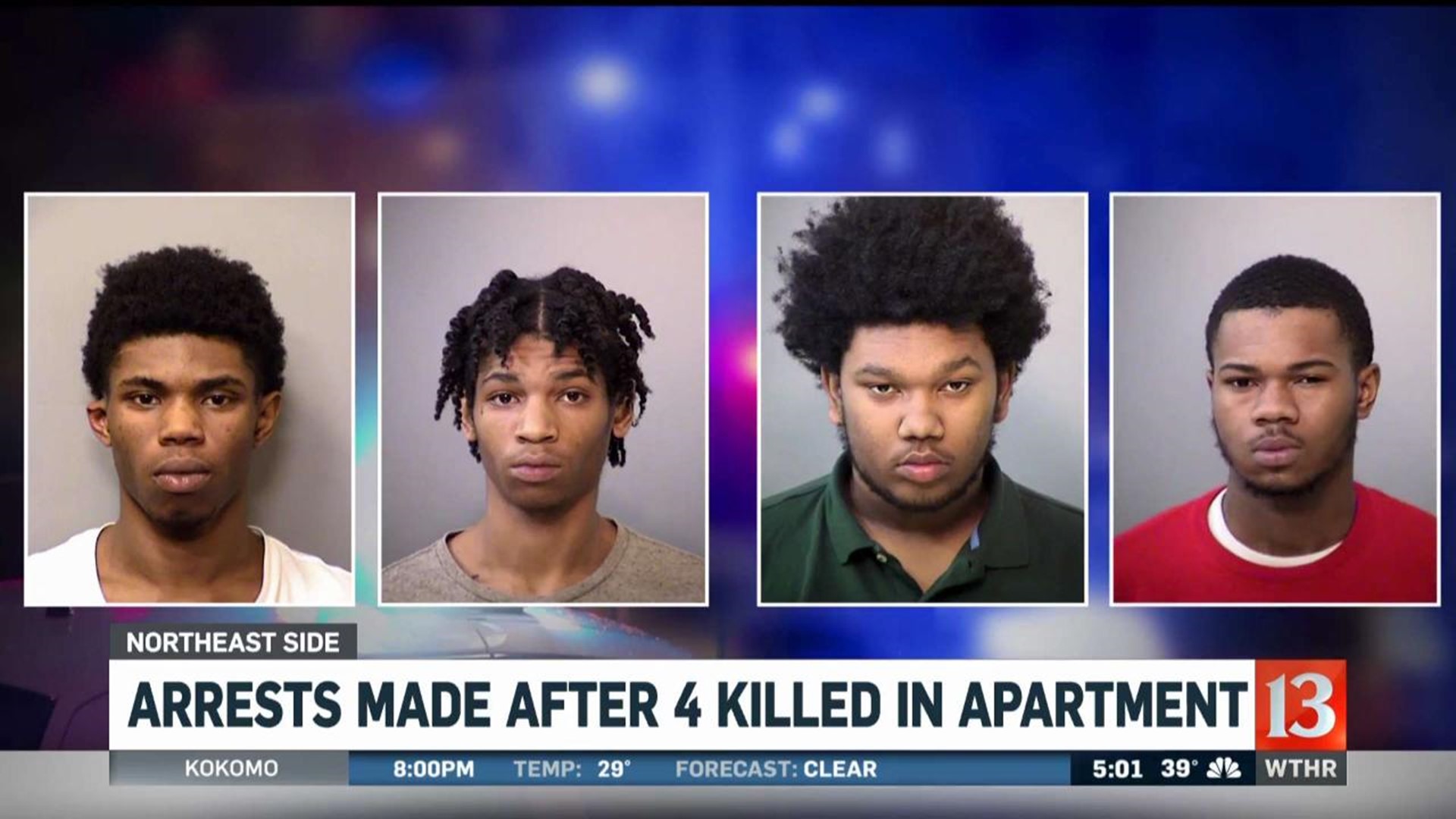 Each of the suspects is facing eight counts of murder and four counts of robbery.

(Clockwise from top left): Marcel Wills, Jalen Roberts, Braxton Ford and Kimari Hunt were killed in a shooting Wednesday on the east side. (Family photos)

A witness told police he was at Wills' and Roberts' apartment when the suspects came in and Watkins had a gun. The victims were shooting dice inside the apartment, according to the witness.​

According to charging documents, the glass door in the back of the home had been shot out and the home was ransacked.

Surveillance video shows three people get out of a suspect's car around 9:55 p.m. Police believe Anderson stayed inside the car.

Charging documents reveal Roberts called Anderson twice while the suspects were in the home. Shortly after, Anderson sent Roberts a text message.

The autopsy report showed all of the victims were shot multiple times.

Police ran a temporary license plate number on the getaway vehicle, which was registered to Anderson. Anderson initially told police his car had been stolen.

Police say Anderson dropped off the other three suspects at Cameron's home, then drove to his own home.

Police arrested Anderson Feb. 13, and brought Cameron and Desmond in for questioning Feb. 14.

Cameron said he was at his mother's home at the time of the crime. Desmond told police he was with a friend smoking when the crime occurred and Cameron was with him. After that, they refused to answer questions.

Police arrested both of them that day. Watkins deleted his Facebook page after the other three suspects were arrested. When police searched his phone records, they discovered he told his girlfriend he was with Cameron on the day of the shooting.

“Our officers and detectives work around the clock to hold accountable the individuals who perpetrate violence in our community, and their efforts have resulted in today’s announcement. These arrests would not have been possible without community partnership, and I am grateful for the relationships and trust we have built between our officers and our neighborhoods," said Chief Randal Taylor, IMPD.

Detectives credited the IMPD Narcotics unit, video surveillance and members of the community speaking up for leading to arrests.

“I want to applaud the quick action and thoughtful investigatory work of the Indianapolis Metropolitan Police Department, as well as the cooperation and collaboration of community members. Today would not be possible without the work of IMPD officers, dedicated to building relationships, creating community dialogue, and utilizing best practices in policing," said Mayor Joe Hogsett, Indianapolis.