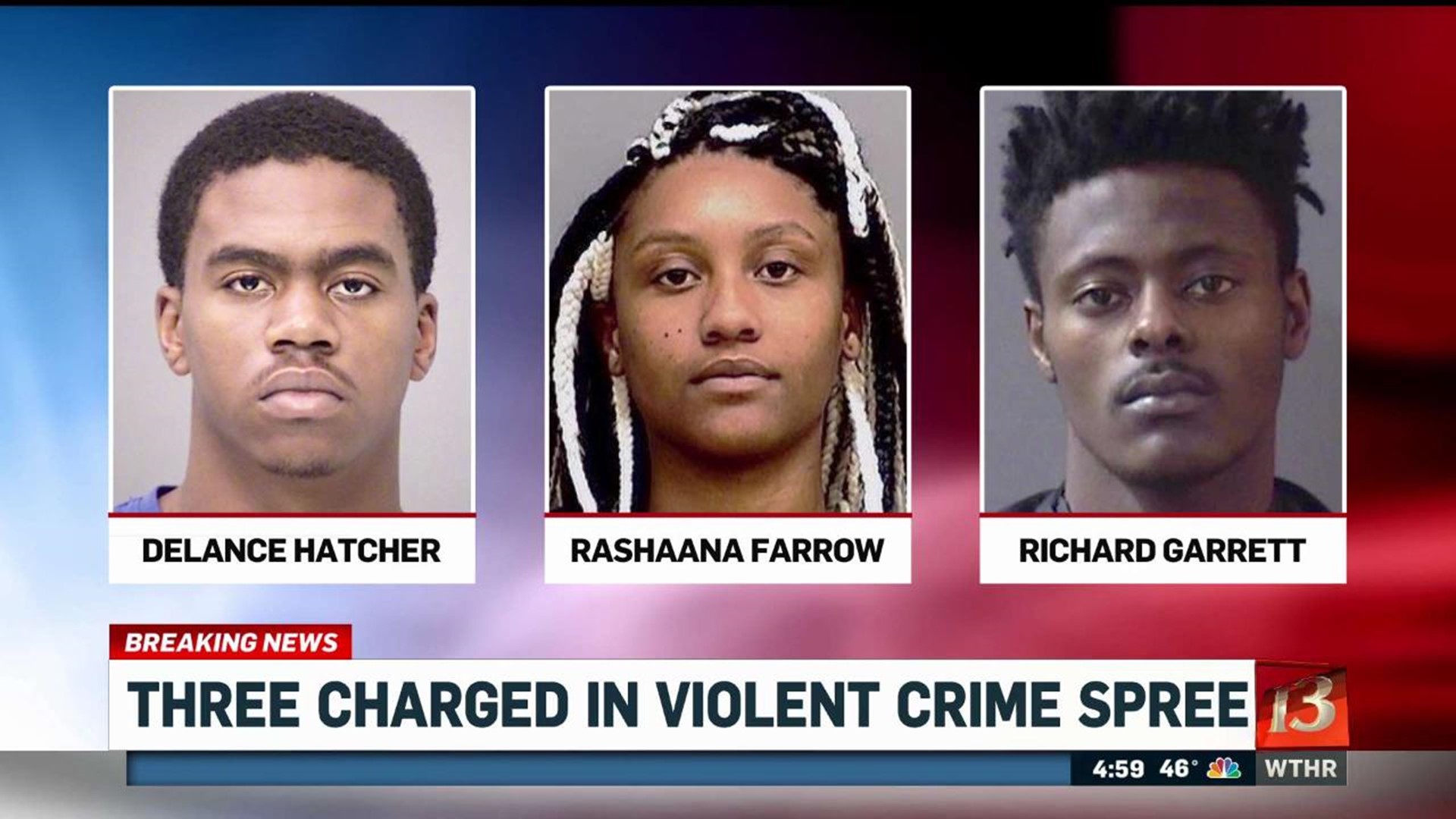 INDIANAPOLIS (WTHR) — Three people are being charged with a crime spree involving robberies, hit-and-runs and murder.

The three are facing charges in 13 incidents including shootings, armed robberies, and the murders of Devon Gillespie.

Garrett is also charged in the fatal hit-and-run of Anthony Mack. Garrett is the same man accused of shooting and killing Fishers Police K-9 Harlej in November 2019.

There were 18 victims including nine that were shot and two who were murdered.

"Their sole mission is to focus on serial shooters, get them of the street and end the shooting cycle," Assistant Chief Chris Bailey said.

IMPD commanders want other cities to follow Fishers and join the program increasing the chances that evidence shooters leave behind, leads detectives to them.

Here is a timeline of the crimes they are accused of committing:

Officer and detectives with IMPD were called to an area near E. 38th Street and N. Sherman Drive.

A man said he got into an argument with Hatcher at a gas station and when he left shots were fired at him.

They later found a home and car had been hit by bullets.

After her arrest, Farrow told a detective that Garrett was upset at the women's brother and that both Garrett and Delance shot the women.

Shell casings matched guns found later during the arrests of Garrett and Delance.

Police were called to an apartment complex at 4156 Edgemere Ct. There they found Devon Gillespie shot multiple times in the basement of the apartment building.

Gillespie's girlfriend said he had gone to take out the trash and never returned. A witness saw several men and a woman run from the area and get into a newer, dark 4-door car.

At that point, detectives had already identified Delance hatcher and Richard Garrett in several armed robberies in that area where shots had been fired.

Police say that in some of those robberies, surveillance video showed Hatcher and Garrett holding semi-automatic pistols.

Three people were shot near 30th Street and Capitol Avenue. It happened outside a liquor store.

Shell casings matched a gun found during the later arrest of Garrett.

Police were called to an area near E. 33rd Street and Emerson Avenue. A dark color sedan had been driving through the neighborhood with two men firing guns out of it.

During the shooting, a home was hit.

Shell casings matched a gun found during the later arrest of Garrett.

During the incident, a woman said a dark colored car sideswiped her and a passenger then fired shots from a rifle at her car.

Fortunately she was not hit and no one else was injured.

IMPD officers responded to a shooting near Keystone Avenue and E. 30th Street.

A witness told police that a person had been walking on Brouse Avenue when a car pulled up. The driver and passenger behind the driver opened fire on the victim hitting him in the wrist.

The victim was taken to the hospital in stable condition.

Nearby homes were hit by bullets, but no one was injured.

Surveillance video from the area showed a dark colored Mazda speeding away at the time of the shooting,

Indianapolis Metro Police were called to a fatal hit-and-run near E. 35th Street and Keystone Avenue.

Anthony Mack had been hit by a dark car and left in the road.

A witness said the car that hit Mack was traveling east and had crossed over into the westbound lane to hit him. The car then sped off.

A piece of the car left at the scene came back as belonging to a 2018 dark blue Mazda 6.

A woman called police to say she had been carjacked at 3405 N. Sherman Ave.

A shell casing found when the car was recovered matched a gun found during the later arrest of Garrett.

Several bullets had been fired at an apartment building.

No one was hit.

Shell casings found outside the building matched guns found during the later arrests of Hatcher and Garrett.

Detectives stopped a car carrying Delance Hatcher. In the car they found a pistol with an extended magazine matching one used in recent robberies. His clothing also matched that worn by a suspect in those robberies.

Police located the dark colored 2018 Mazda 6 they had been looking for.

Damage to the windshield matched the deadly hit-and-run involving Anthony Mack from the previous day.

Inside the car were shell casings.

Surveillance video from a local store shows what appears to be Richard Garrett buying the ammunition and wearing the same shirt as a suspect in recent robberies.

A call came in to police about a person shot at 425 Harvard Place.

Two people had been shot.

A car found nearby matched one carjacked from a woman back on Oct. 17.

Shell casings found matched a gun found during the later arrests of Garrett.

The Fishers Police Department was alerted to a car driving eradically on I-69.

Police attempted to stop the gold Cadillac when it sped away.

Officers chased the car and stopped it capturing Rashaana Farrow.

The driver, Richard Garrett ran off. Police K-9 Harlej was sent after him and was shot and killed.

Police later found Garrett and the .45 pistol used to shoot the K-9.

An IMPD detective was called to the Hamilton County Jail by Rashaana Farrow on Nov. 12.

She told the detective that Garrett was her boyfriend and she was with him during several shootings and robberies in October.

Farrow told the detective she was with Garrett and hatcher during the murder of Devon Gillespie. She said they had actually gone to the apartment to kill someone else when they say Gillespie.

Farrow told the detective that Hatcher was upset with Gillespie for allegedly selling him a gun and then stealing it back.

Farrow also admitted to being in the car when Garrett allegedly hit and killed Anthony Mack as he was walking in the street. She had complained because glass from the shattered windshield got in her eyes.

She also admitted to being with Garrett and Hatcher during the road rage shooting on Oct. 17 and shooting on Brouse Avenue. 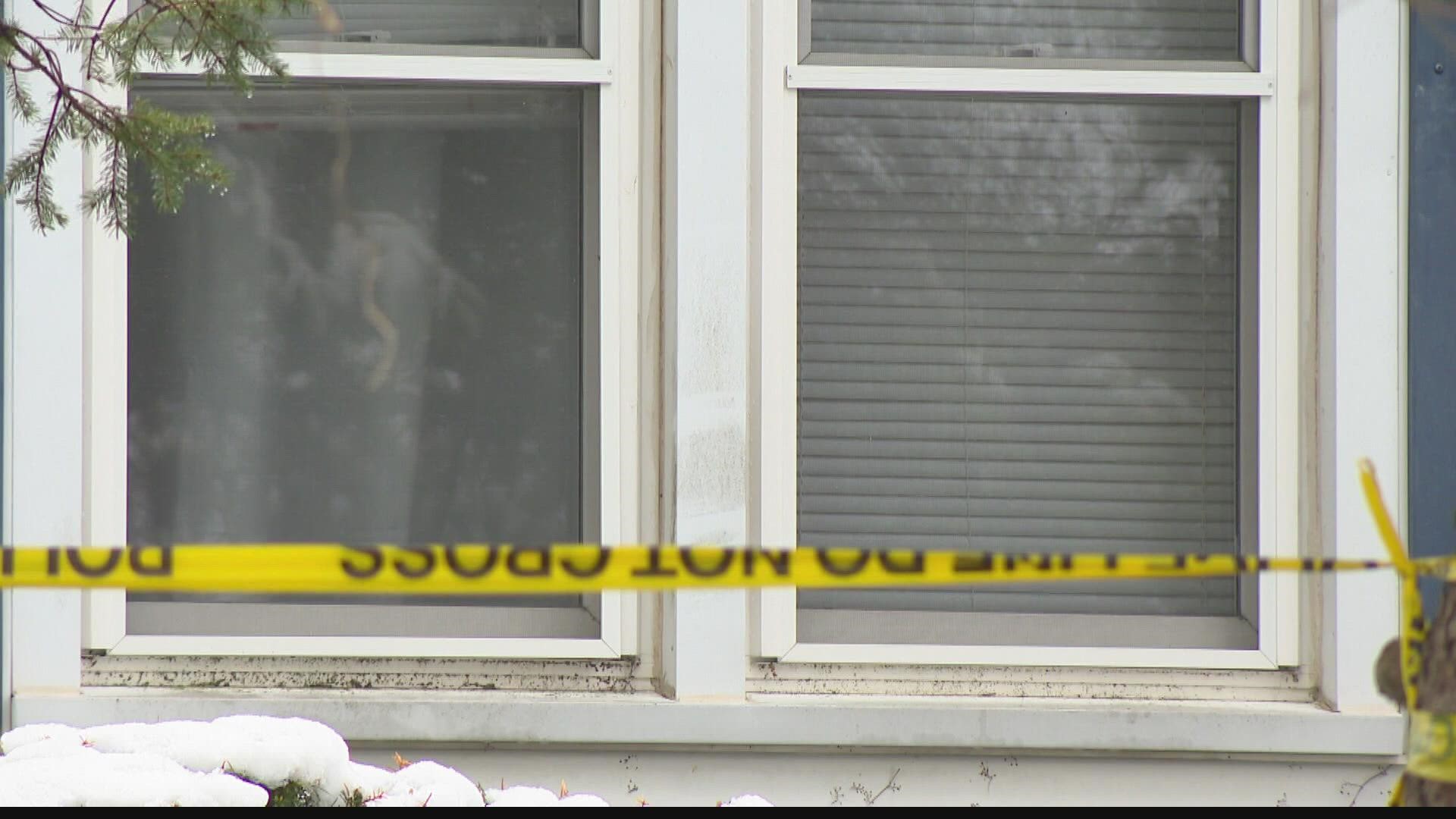