For every pair of socks sold, Sky Footwear gives away another pair to a homeless shelter. 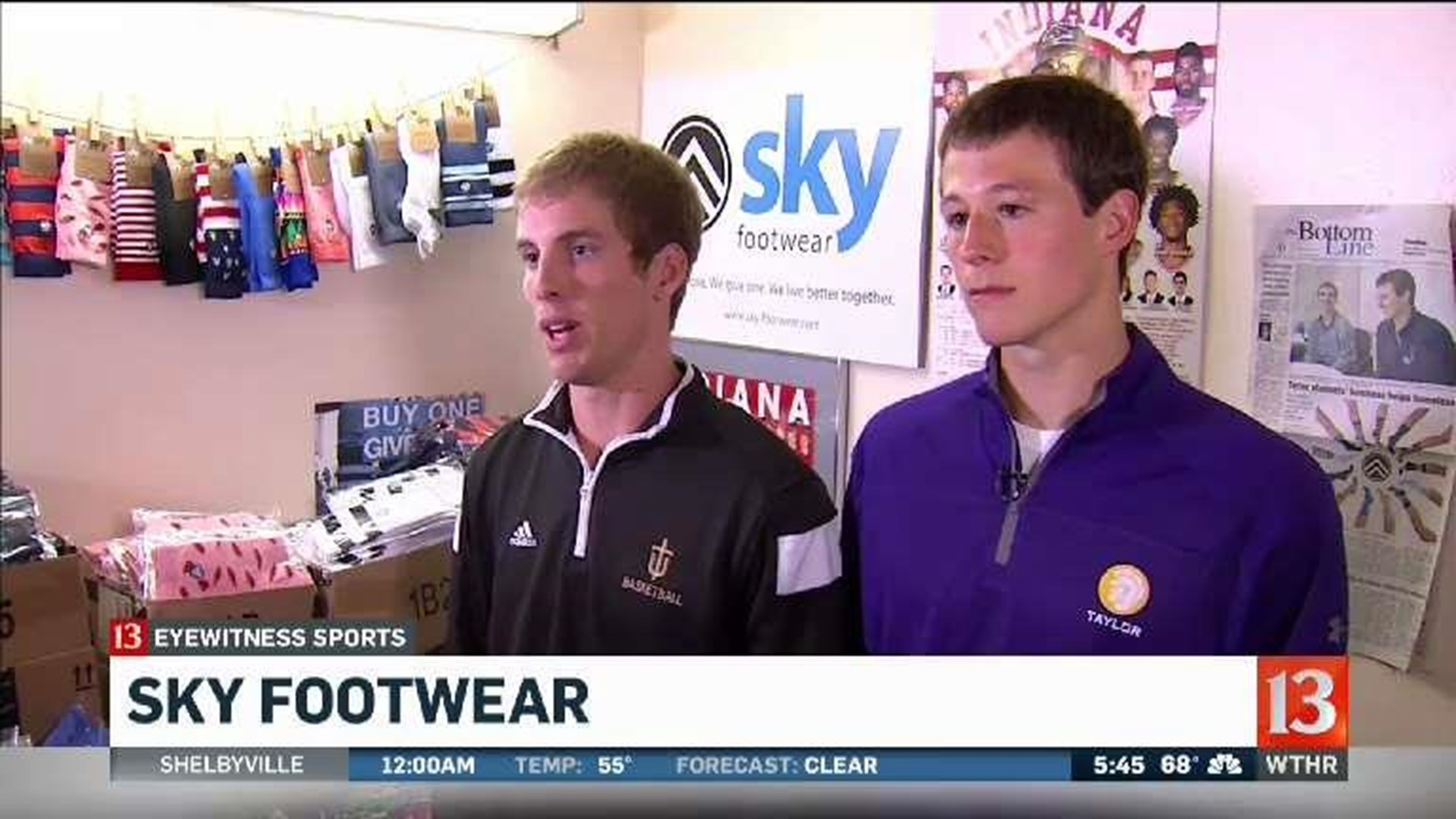 The campus home of junior Keaton Hendricks and senior Eric Cellier also serves as the headquarters of Sky Footwear. The two business majors and Taylor basketball teammates started the sock company last August with a mission.

For every pair of socks sold, Sky Footwear gives away another pair to a homeless shelter. While volunteering at a homeless shelter in his hometown of Bloomington, Hendricks learned that socks were the most needed item.

“People just overlook it,” said Hendricks. “They just think everybody would have a pair of socks, right? But that's not the case. For these people, they usually only have maybe one pair of socks, two pair of socks, so they go through them quick."

The logo on every pair of Sky Footwear socks features two stacked right angles pointing upward like arrows inside a circle.

“A symbol of hope, and really hope is what we're trying to provide to these people,” said Cellier. “Optimism and looking forward - and so we think the sky name is a symbol for that."

Sky Footwear sold a record 665 pairs in March, 262 in April. A matching donation goes to a different shelter in a different city each month. Wheeler Mission in Indianapolis has received socks, as well as homeless shelters in Louisville, Milwaukee, Evansville, Bloomington and Muncie.

“The last time we handed them out we saw someone put them on right as we handed them to them,” said Cellier. “So just seeing that it's a need that is being met through something that we're doing is what it's all about. We've had the opportunity to meet these people and hand out the socks. We learn a lot about ourselves in the situation we've grown up in. We've learned a lot about compassion for others and not just people that are like us or have grown up in similar situations as us.”

“The reward for us comes really when we get to hand out the socks or give the socks to the homeless shelter that we raise it for," added Hendricks. “It just goes to show that our impact is being made and people are buying in to the mission that we have and want to be a part of something that's bigger than them and bigger than us.”

The Taylor Trojans men’s and women’s basketball teams wore Sky Footwear socks this past season. Hendricks started every game and led the Titans in scoring (13.1 points per game) and rebounding (6 rebounds per game). Cellier led the Trojans in three point shooting (50.6%).

They filled the basket while filling online orders three times a week.

“Basketball and athletics are what kind of drove me to business, because I feel like business is a big sport for the rest of my life,” said Hendricks. “It's also a hobby for us. We enjoy doing it. Prioritizing time for it is not an issue. Each day we would try to work on something. Over a period of time, we would look back and wow, we have something coming together here.”

“That competitive drive that we have for basketball and sports definitely plays a factor in how we try to run a business and beat our competitors,” said Cellier. “To see that we started something that people like and want to spend money in is an accomplishment, so it's been cool to see the support that we've had from so many people across the country.”

The inventory is in Hendricks’ room. Just a few doors down the hall is the shipping department in Cellier's room. Each package mailed out includes a hand written note:

“Thank you for the order and for supporting our mission. These socks will be going to help support the Muncie Mission this month. Enjoy your stylish pairs as well. God Bless,” -Keaton

The socks range in price from $10-12 per pair and are also for sale in the Taylor University bookstore and Athena’s Fashion Boutique in downtown Indianapolis.

“We didn't know how people would receive what we're doing and our mission,” said Hendricks. “We didn't set any clear goals. We still haven't set any clear goals, because that's not what our focus is on. Our focus is on the people and the impact that we're making. We don't want a great mission, but then a bad product, so really great quality and also we've hit on dress socks. We have all kinds of socks for different people, different styles.”

All Sky Footwear revenue to date has been reinvested in the business.

“Our goal right now is continued growth,” said Cellier. “From the beginning it's been centered on people and how to raise as many pairs as possible. I guess it's kind of cool that the more that we sell the more we can donate so the business and giving aspect can hopefully increase."

Cellier is about to graduate from Taylor University and will move to Chicago for an internship. But the sock partnership and mission will continue. The sky is the limit.