Grocery store coming to food desert on Indy's northeast side

The owners of Wall Street Market at 38th and Sheridan are getting a big boost from a local company to help their community. 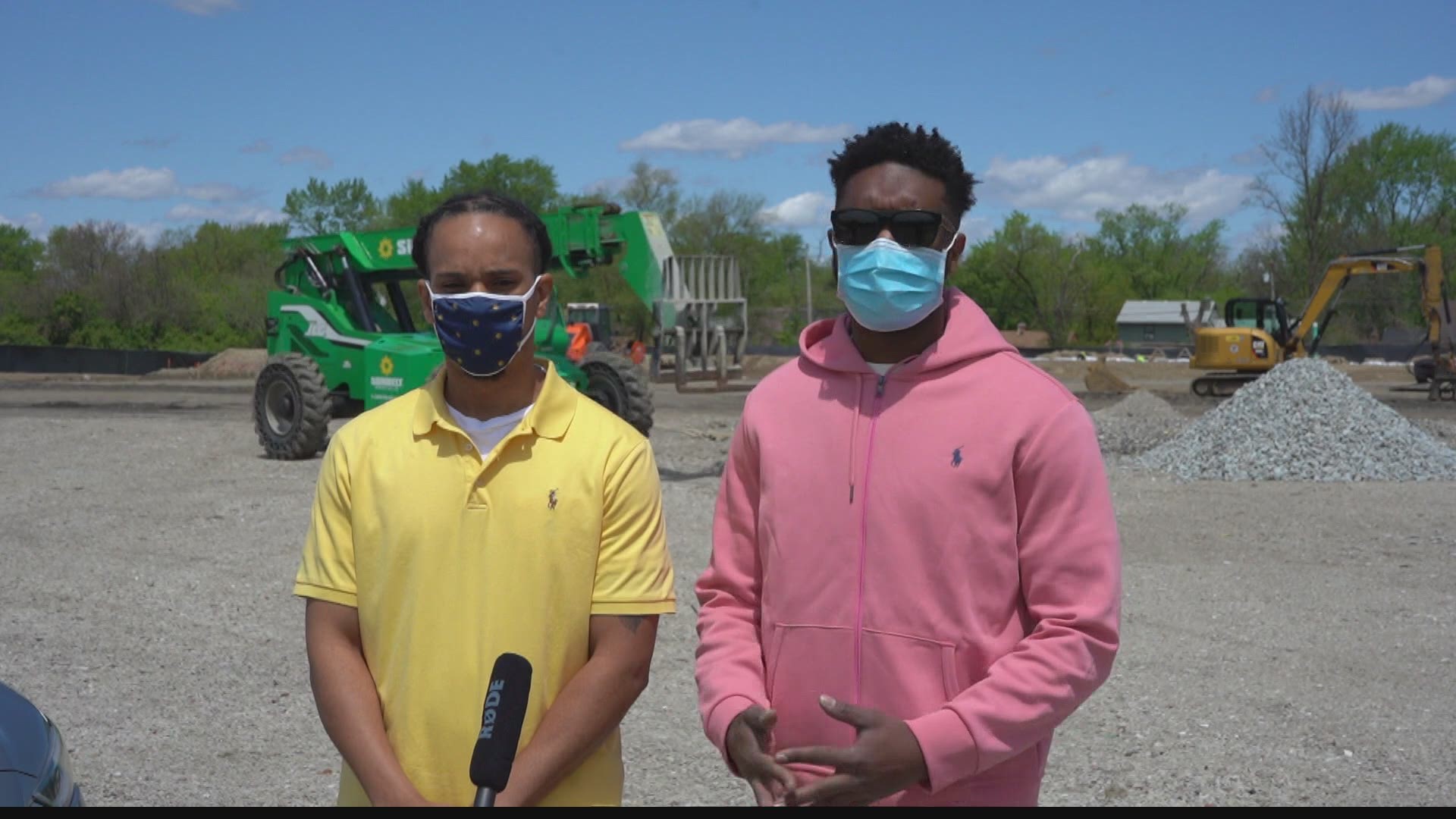 INDIANAPOLIS — Construction is underway for a grocery store on the northeast side of Indianapolis.

"We're from this neighborhood and there's no grocery stores in the area," said Markus Williams.

Williams and Michael McFarland opened a small grocery store a few blocks away from the intersection called "Wall Street Market." Although it's now closed, within the course of an hour, several people will come by to see if they can grab a few items.

"We started a small grocery store and then Cook (Group and Cook Medical) came along and gave us an opportunity to start a big grocery store to feed the whole neighborhood," the men said.

It will be called Indy Fresh Market.

"It'll be about 15,000 square feet" when it's complete, said Pete Yonkman, president of Cook Group and Cook Medical.

"Because of our great partnerships with Goodwill and CICF (Central Indiana Community Foundation) and the IMPACT fund (IMPACT Central Indiana) we are, Cook, is going to build the building and donate it. CICF will help cover some operating funds up front and the model is ‘lease to own,'" said Yonkman. "Our intent is that Michael and Markus will own the real estate, the building, the business outright with time."

Why is a medical device company helping build a grocery store?

"The building will have 100 jobs and our intention is to hire people directly from the community. (The facility is) surrounded by housing," said Yonkman.

The construction opportunity is also creating jobs in the area. While working on expanding their business, Yorkman said Cook Medical noticed something.

"We were working with our community, it was a clear a big obstacle was food access. We saw the incredible work Markus and Michael were doing, we thought, 'Why not put our resources together and see if we can make this work?'" said Yonkman.

They decided to work with the community to build a grocery store right next door to their medical device manufacturing facility.

"Over time, we've seen so many communities where manufacturers left, then the grocery stores leave, and then the housing starts to get depleted, or the schools don't get invested in. Our goal is, with this project, to help this community and be neighbors in this community, partners in this community," said Yonkman. "But also, how do we create a model that brings opportunity to everyone?"

Is this a model that could be replicated?

Supermarket consultant Joseph Welsh, also known as "Joe the Grocer" said "food deserts are one of the primary reasons I was contracted by the City of Indianapolis two years ago, I've known Markus and Michael that long, we work together in their store Wall Street Market and built that into a small new business."

"Food insecurity is a problem in this neighborhood, as it is in many neighborhoods in Indianapolis," said Welsh.

He believes it will bring "significant jobs to the neighborhood" and said they are "working with Martin University and they're going to create a retail certification track so we can begin generating more entrepreneurs and hopefully bring more stores like this throughout the city."

"This is a good example of corporate, public and private coming together and accomplishing something to put out food hunger," said Welsh.

Why it's important to engage the community

McFarland and Williams said that as young entrepreneurs from the area, who had already opened a small market, they appreciated that Cook Group/Cook Medical came to them rather than reaching out to a large grocery chain.

McFarland said he sees Cook as a "compassionate company" because of their actions. McFarland and Williams said they believe that because they're from the neighborhood and know the area and the community, they can better serve the needs of the community. They said they plan to have a hot food bar in addition to all of the regular staples one would find at any other grocery store.

"The evolution of philanthropy is really using your core business opportunities. You know, if you have an opportunity to expand a manufacturing plant, why not go to a community in your state of your area that hasn't seen opportunity in a while," said Yonkman.  "There are a lot of areas in this country that are looking for that opportunity and if we as companies provide that first step and opportunity, they'll be a lot of people that take them."

He said it's an approach that not only helps the community group, but creates loyalty among employees and helps areas prosper.

"At some of our other facilities, we have three generations of people working in our facility. I've had meetings with a grandmother, a mother and a daughter all in the same meeting," said Yonkman. "And that's our hope for this new facility. If you're going to do something like that the community has to be just as successful as we are, and we're only as successful as the community. So we want to make sure we're partnering with this community to give it every opportunity it has to reach its full potential."

Yonkman said companies still talk about being community-minded, but "that meant something different years ago."

"It meant much more community engagement and involvement," he added. "(People used to) support our local banks, and our local restaurants... and I think we need to return to that."

"There's a really opportunity for corporate America to rethink how we engage with communities," said Yonkman.

"For so long we've seen job and opportunities leave the country and that's for a lot of reasons," said Yonkman. The economy may have rebounded from the 2008 recession, but many Americans did not. And now the high unemployment and economic impact of this pandemic is taking its tolls on individuals and families.

"Right now, in particular, there's a time where people are rethinking how we work, how we live, what it means to be a community itself. And if companies were to think a little bit different about this and re-engage with communities, and move opportunities where they're most needed, I think we'd see a transformation in how people view companies, how they think about how they view them and their role in society. And I also think, people would have a different view about the opportunities in their community," said Yonkman.

Economically, he said, "if we're going to be successful as a society, we're going to have to have services where we make things again. We tend to buy things and move those things around and we're not really making a lot of stuff. It's really important that we think as a society how do we reengage our people, our talent, to make things again and to have the ability, because that's really the core where the middle class comes from. If we don't have that strong, then we have a problem," said Yonkman.

Through creating financial opportunity for growth, people can invest in their communities and create jobs and the ripple effect can continue. Rethinking corporate philanthropy could be a solution to strengthening the economy.