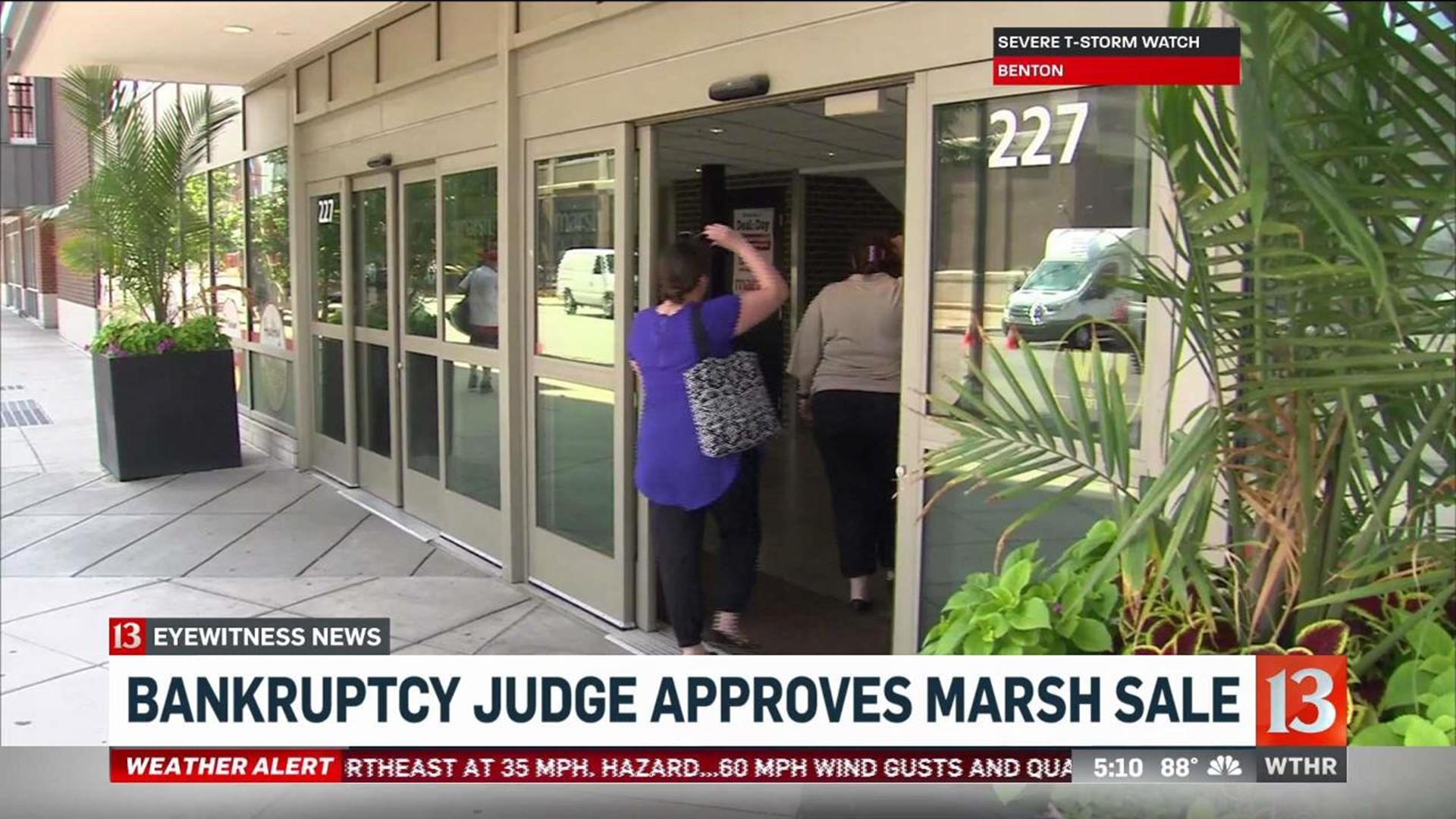 INDIANAPOLIS (WTHR) - A bankruptcy judge has approved the sale of 26 Marsh grocery stores - 11 to a Kroger subsidiary and 15 others to an Ohio-based company called "Fresh Encounter."

Marsh on Tuesday released the winning bidders who will take ownership of 26 properties across Indiana and Ohio. The successful bidders were announced in a filing to the bankruptcy court handling the case after the auction process wrapped up Monday.

The 18 remaining stores Marsh owns, the ones that did not sell, will close for good by July 1.

In downtown Indianapolis, home to two Marsh stores, shoppers were relieved to hear they'd still have a grocery store, though under new ownership.

The Marsh on Michigan Street will become a Kroger. Lori Mardi, who often shops at the store, said, "It's important to have a grocery store downtown...when (my co-workers and I) heard the Marsh may close and go out of business, we were kind of freaking out, because we do love to walk over here."

The store opened three years ago amid much fanfare with its open store concept, specialty foods and grab-and-go offerings. It was downtown's first new grocery store in 30 years and one desperately needed as millennials began moving downtown.

"With how fast-moving life is and everything going on, it's nice to go to one place, have friendly service and get all you need," Randy Gibbs said.

The Lockerbie Marsh, meanwhile, will become a Fresh Encounter.

"I'm happy to hear it's staying" as a grocery store, said Scott Jones. "I hope they do improve the interior a little. It needs to be updated a bit."

Angela Drake, who lives nearby, was also thrilled at word of the sale.

"I've been waiting to hear some news, because I was really going to be disappointed if this store closed down," she said. "It's one of my favorite places to shop and it's part of the neighborhood."

What's not known about the sale of any Marsh stores, is when they'll reopen under a new brand - or what happens to Marsh employees.

Drake, who's friendly with several employees, said "one of my first questions was, 'Are you guys good? Good with the transition?' So far, no one knows anything in that regard."

One Marsh employee who asked not to be identified said she was "relieved" to hear the sale had been approved.

"I'm optimistic. I would like to keep my job...I love working at this store, but there are a lot of questions" about what's next, she said.

A Kroger spokesperson said he didn't yet have information to share on that.

Kroger will have two more job fairs, Thursday and Friday at the Drury Plaza Inn at 96th and Meridian from 9 a.m. to 7 p.m.

As for the 18 stores closing? One is in Beech Grove on Albany Street. There's been a grocery store at the location for decades - most recently a Marsh.

"There's a Kroger and and Walmart...it's not that there's nothing around, it's just not close," she said.

And closeness is important to many of the Marsh store's loyal customers.

Robert Gorman said, "It's just a minute to get the Marsh and forever to get to Kroger. Traffic is bad."

He said the loss of Marsh will have an impact.

"A lot of people are little older and some walk and without it's an inconvenience," Gorman said. "It's hard on them and it's hard on me."

Jacque Carroll said she, too, worried most about the elderly people and those without transportation.

"You hear about these food deserts," she said. "It's like that's someplace else and it's right here. It's really sad."

Even those who don't shop at the Marsh don't want to see it sit empty.

"I'm hoping eventually it's bought because it would really be a great benefit for everyone, Tuttle said.

"We're actively working to attract a new store, we've been reaching out to other grocery stores and chains and have a meeting scheduled next week with a company very interested in relocating," he said.

The 11 stores now approved to go to Topvalco, Inc. are:

The 15 stores now approved to go to Generative Growth II, LLC are: