A billboard became a local artist's release, and to her surprise, the work wasn’t going unnoticed. 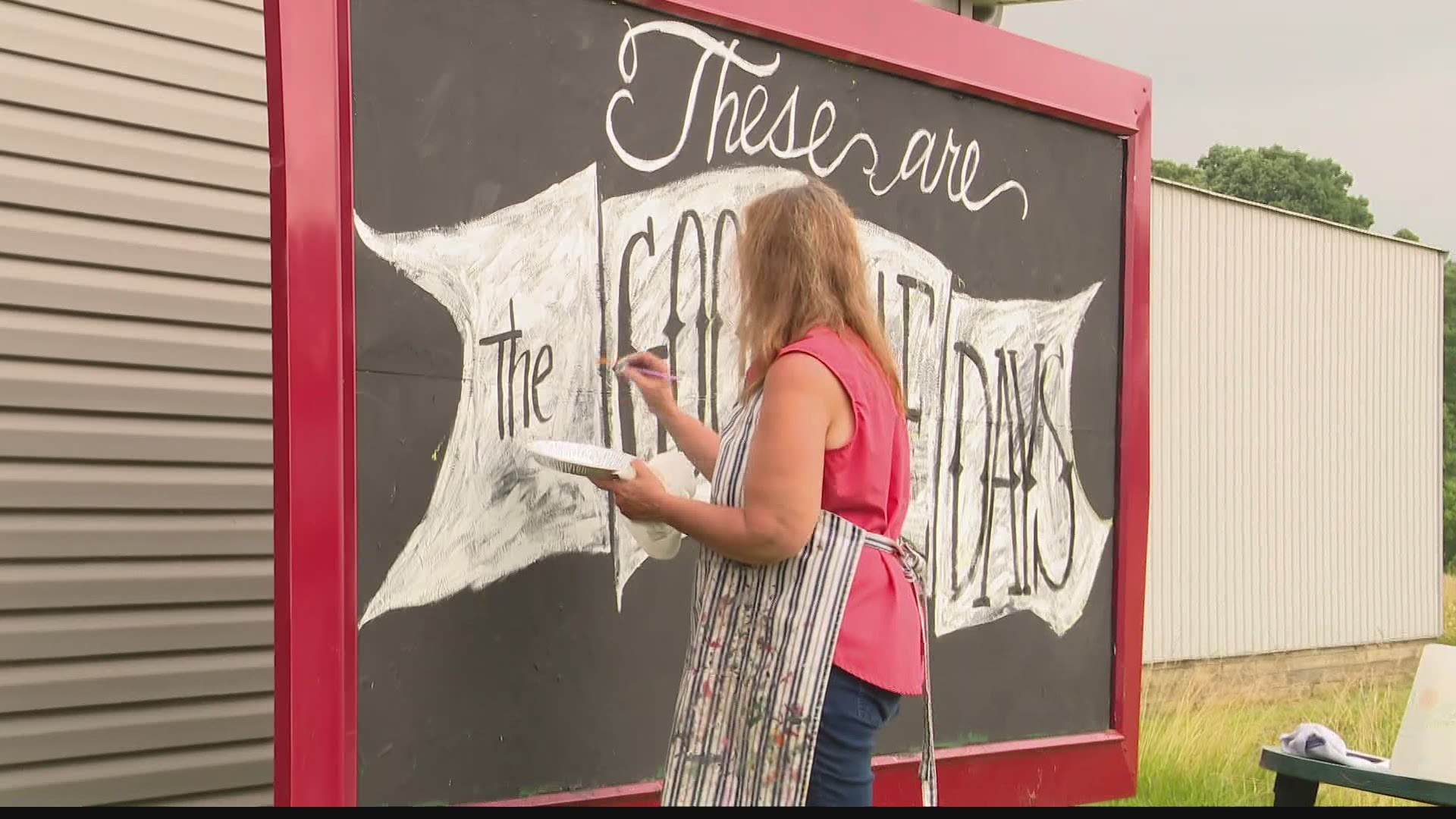 Painting is what she was born to do.

“My first piece of art was done before I could even walk," Vaught said. “My art career can be summed up as 'I make enough to starve to death.'”

Her work may be on its biggest display yet.

“There’s no pressure," Vaught said. "Just let the joy come out, and it’s kind of like light: It goes wherever it wants to go.”

She moved to a property on Slideoff Road in Camby last August and is a live-in housekeeper. She moved after falling on hard times during the COVID-19 pandemic.

Credit: John Doran/WTHR
Elizabeth Vaught got through tough times during the pandemic with art, and it help lift spirits in her community too.

“Being an artist, this wall here was driving me nuts because it didn’t have anything on it," said Vaught, pointing to the paneling on the side of the garage. "I asked the landlord, I said, ‘Do you care if I bring the billboard up here?’ I said, ‘It needs something.’”

That billboard became her release.

“It’s almost like something bubbles up inside of me, and it has to come out," Vaught said.

Her inspiration comes from anywhere.

“I was going through a low point, and I looked at the old barn there, and the barn had an airplane going over it," she said. "I thought, that barn has seen so many things. You know, we look back and think those were the good old days, but good times and bad times walk hand through time. This billboard is going to say, ‘These are the good old days.’”

To her surprise, the work wasn’t going unnoticed.

“I had only been here maybe a month, maybe two months, and people started honking and waving, and I would wave back and thought, I don’t think I know them,' said Vaught. “Then, I would start getting my mail and people would say, ‘Are you the one painting the billboard?’ And I said, ‘Yes,’ and they say, ‘We love it.’ I was like oh my gosh, people are noticing.”

Her work wasn’t just a pretty spectacle to some.

“One lady even said it lifted her spirits during a breast cancer journey, and I’m going, wow," said Vaught. "You couldn’t talk to anyone during COVID, and I feel like I reached so many more people without uttering a single word.”

She didn’t do it for the attention.

“I’d like to say I’m a philosopher and all these wonderful things, but I just live life this silly little way," said Vaught.

Vaught did exactly what she’s always done and brought some smiles to faces along the way — including her own.

“Everything bad turned out good," she said.