Their style and DIY approach has some referring to them as the Chip and Joanna Gaines of Madison County. 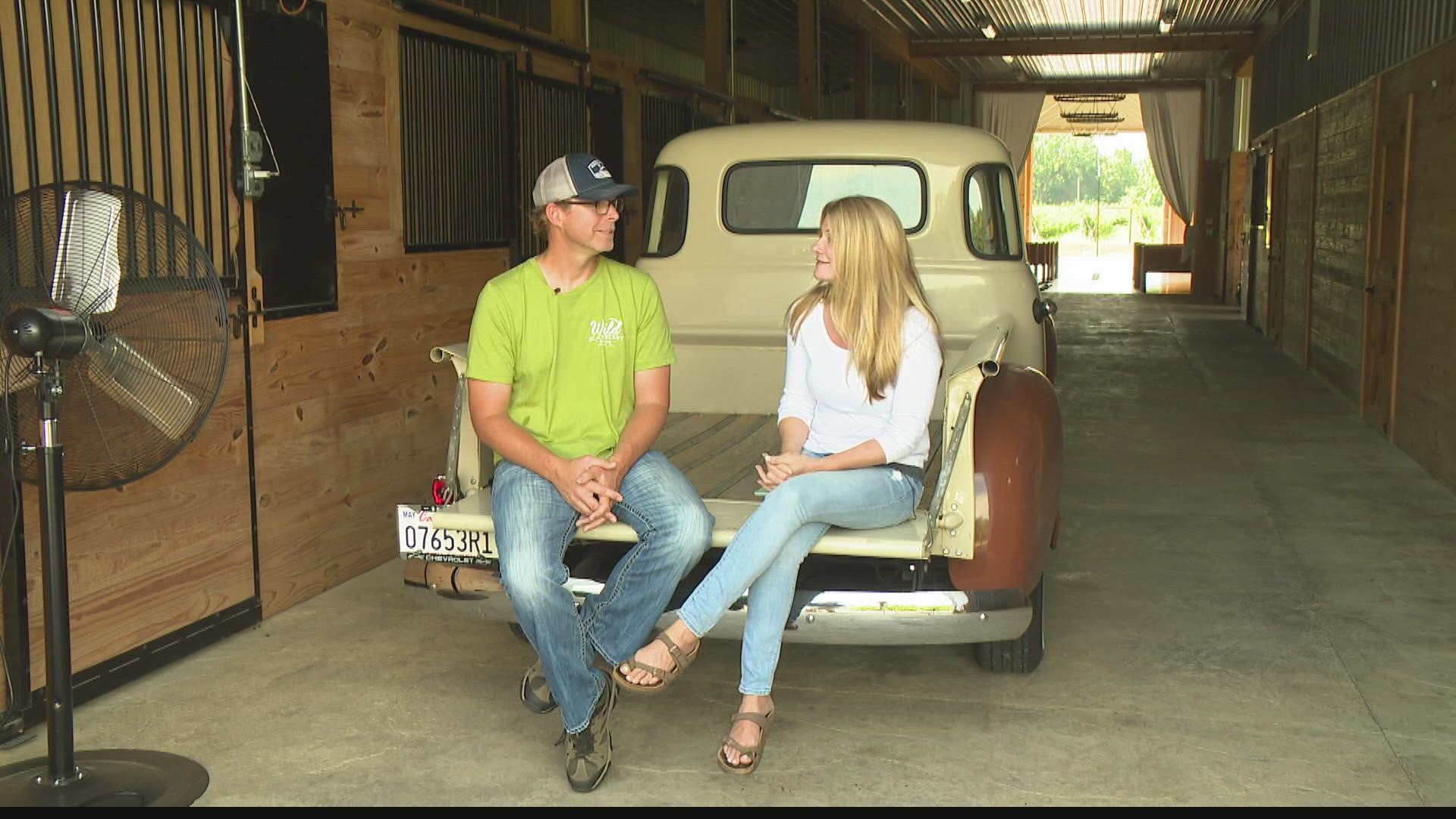 FORTVILLE, Ind. — Blackberry picking season typically wraps up by Labor Day, but Greg Butts and his wife, Jennifer Rhodes, who own 60 rows of berries, or three-and-a-half miles worth of plants, are busier than ever.

They own Wild Blackberry Farms in Madison County after making a major lifestyle pivot.

He was in finance and she's an attorney. They had four children and lived in suburbia in Hamilton County.

But both grew up in rural Indiana, she hails from Peru and he's from Galveston.

They started searching for land nearby where the family could play and camp. Eventually, they found 40 acres with a creek about eight miles west of their neighborhood in Madison County. As soon as they purchased the property in 2012, their metrics changed quickly.

"We bootstrapped and, you know, did it all kind of with a lot of sweat equity," Jennifer said.

After a few years, the plants started producing berries, the crops flourished, generating 30,000-50,000 pounds a year. Maintaining the fields became a new full-time job for Greg. Their next step brought them closer to his new work.

Credit: WTHR
There are about three-and-a-half miles of blackberry bushes at Wild Blackberry Farms.

"We decided to sell the house and move out here. We basically just moved into the barn. We didn't want to pay rent somewhere," Greg said.

They started construction on a new house and lived in the barn, which quickly lost its appeal.

"I was good with it for about six months and then I was like, 'Get that house finished, quick!'" Rhodes said.

Later, the pandemic hit, and the couple kept getting questions about that beautiful barn, a perfect backdrop for an outdoor wedding. They hosted for a family friend from church, word spread, and they are booking events into 2022.

Credit: WTHR
The barn the couple built on the property now serves as an outdoor wedding venue.

"At this point, the events have eclipsed the blackberries," Rhodes said. "We had no business plan for this. We could have, we probably should have...but we didn't do any of that. It just felt like the right thing to do. My gut said move forward. So we would keep just taking one step forward. And as long as there were no major roadblocks. It just seemed like that's the way we should keep going. It's so much nicer now that we are sharing with other people."

They host "u-pick" berries, yoga on the farm, and a day-long blackberry festival. They are hosting a Hoosier Homesteader's Hangout event on October 16.

"We're seeing thousands of people come through...every year now, and then that which led to the weddings also. And so...it's all just naturally evolved," Butts said.

"Agriculture is hard business, like so many things you can't control and predict. And so that's harder. But in terms of, you know, what's the better business...the events," Rhodes said.

And now they're expanding, transforming the Carnegie Library in Elwood into a second venue.

Credit: Instagram/thecarnegieindiana
Greg and Jennifer are working to renovate the Carnegie Library in Elwood into a second event space.

"Yeah, we've heard that a couple of times. just commenting on the house. 'That looks very Chip and Joanna Gaines-ish,'" Rhodes said. "And Greg, you maybe resemble Chip in attitude and kind of what you do. They're great. So I mean, I'll take that."

They take it as a compliment about what they've created at Wild Blackberry Farms , where they both feel closer to their true and best you.

"I think by moving out here and doing what we're doing, I was able to get more back to that place," Rhodes said. "We had no business plan for this. We probably should have. But we didn't do any of that. It just felt like the right thing to do. My gut said move forward. So we would keep just taking one step forward. And as long as there were no major roadblocks. It just seemed like that's the way we should keep going."

If you're tempted to do the same, here's their advice:

"Feel the fear and do it anyway," Butts said.

Rhodes said looking back, she believes God was weaving pieces and parts together to connect their childhood, their business experiences, and the life they wanted to create for their children.

"If it feels right. Take some steps forward and if the path is clear, keep going that direction," she said.